Malcolm is finally trying to walk. The 3rd is when he decided that this walking thing might not be so bad after all, but we definitely hadn't hit primary mode of transit yet. He was still super wobbly and usually only took four or five steps before lurching into someone's arms, or having to catch his fall himself. But he was standing up without pulling on anything multiple times each day and would usually try to take a few steps after having done so. And he was less likely to scream that you were torturing him if you grabbed his hands and helped him practice walking.

Only a week later and he's made tremendous progress. Still some crawling, but we're thinking Saturday might be the day we can say he really started walking. It seemed every time you turned around he was standing up and walking somewhere. A lot of last week's wobbliness is gone already, though there's still some of it there. I think it's safe to say that crawling is no longer viewed as the best way to get around. 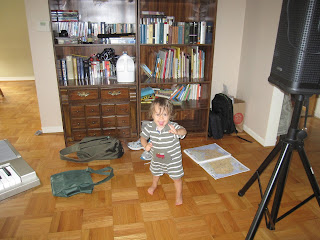 The past couple months he's been doing this adorable thing where he pulls out a book, opens it up, and then lays down on his stomach to "read". He usually only hangs out that way for a few seconds before moving on, so it's been tricky to get a picture. I finally grabbed one the other day when I saw him pulling an old atlas off the shelf. This is totally something he's picked up from Gareth, who frequently reads this way at bedtime and throughout the day. 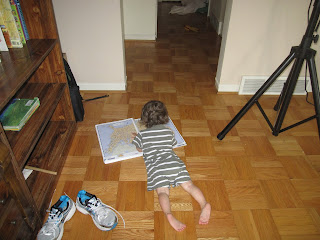 SO CUTE! He looks mighty proud of himself.

Oh my, he's gotten so big. You can really tell he's going to be tall and thin. Congrats to him on walking--quite an accomplishment!