Dino Day at the Burke

I was able to take Gareth to the Dino Day at the Burke Museum a couple weekends ago, courtesy of the membership my brother and sister-in-law gave us for Christmas. I could've taken him regardless, I guess, but I probably wouldn't have even known about it otherwise and membership gets you in an hour early, which made it so the timing worked out for us to get there and be back in time for Ryan to still make his drum lesson.

This was an outing for just Gareth and myself - Malcolm stayed home with Ryan - and it was so refreshing to get out and do something with just Gareth. No worries about him losing himself, or melting down because of hunger/exhaustion, or needing to take a break for a diaper change. And I could focus entirely on him and what he was wanting to do and telling me. It was so nice that I actually experienced a twinge of regret; if we hadn't had Malcolm we could do this kind of stuff with Gareth so much more often! But that didn't last long, and it'll be just a couple more years and then outings like this will be much easier with Malcolm along. Until then I'm hoping that Ryan and I can take him out one on one for things like this a little more often.

Anyway, at Dino Day they have bunches of fossils set out for people to look at and scientists there to talk about them and answer questions. Even being there an hour early it was quite crowded around these tables, so Gareth and I only looked at a few before heading over to the cases where they have crystals so he could admire those for a bit. Then we headed downstairs where they had a "dig pit" set up: 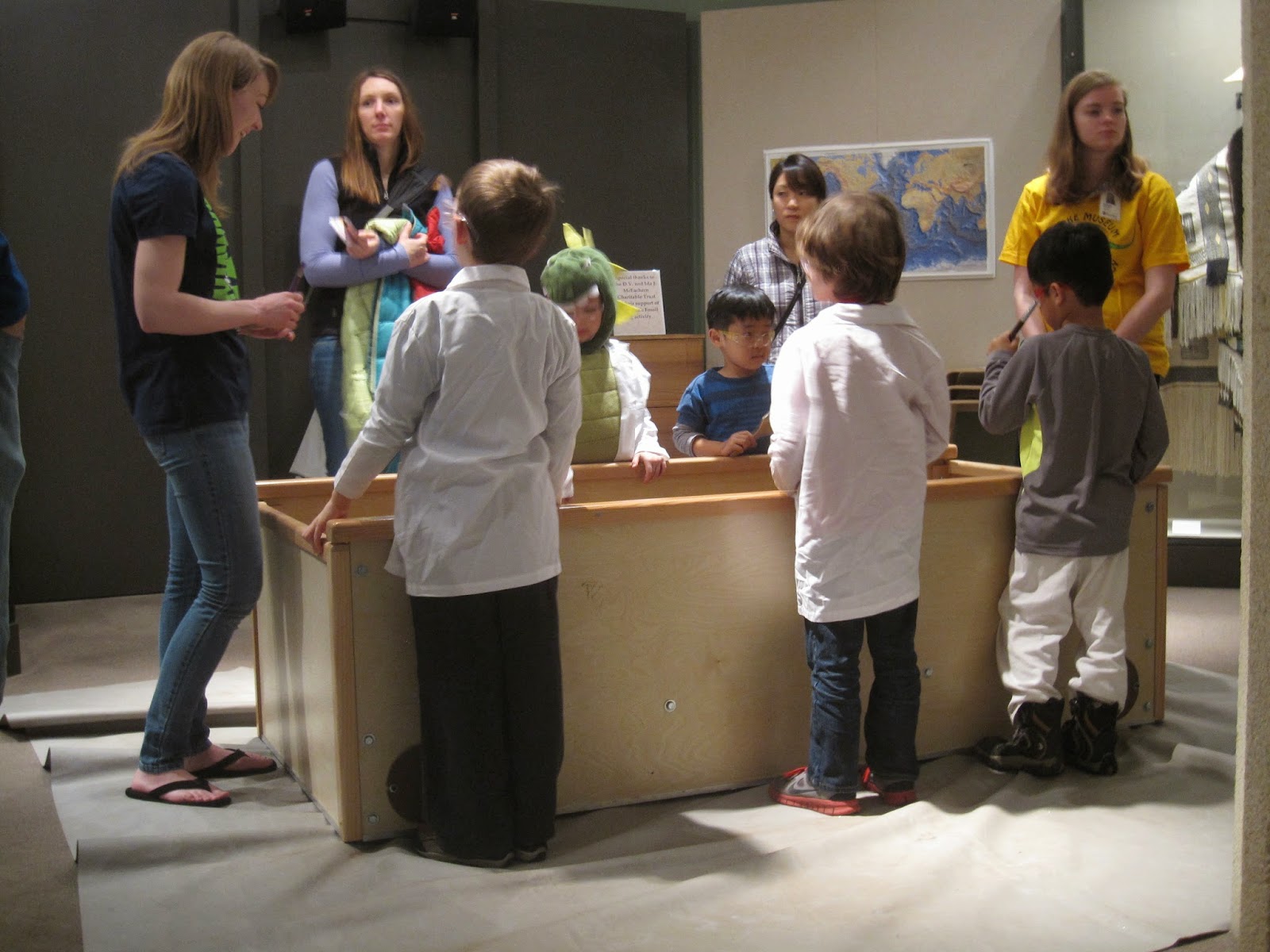 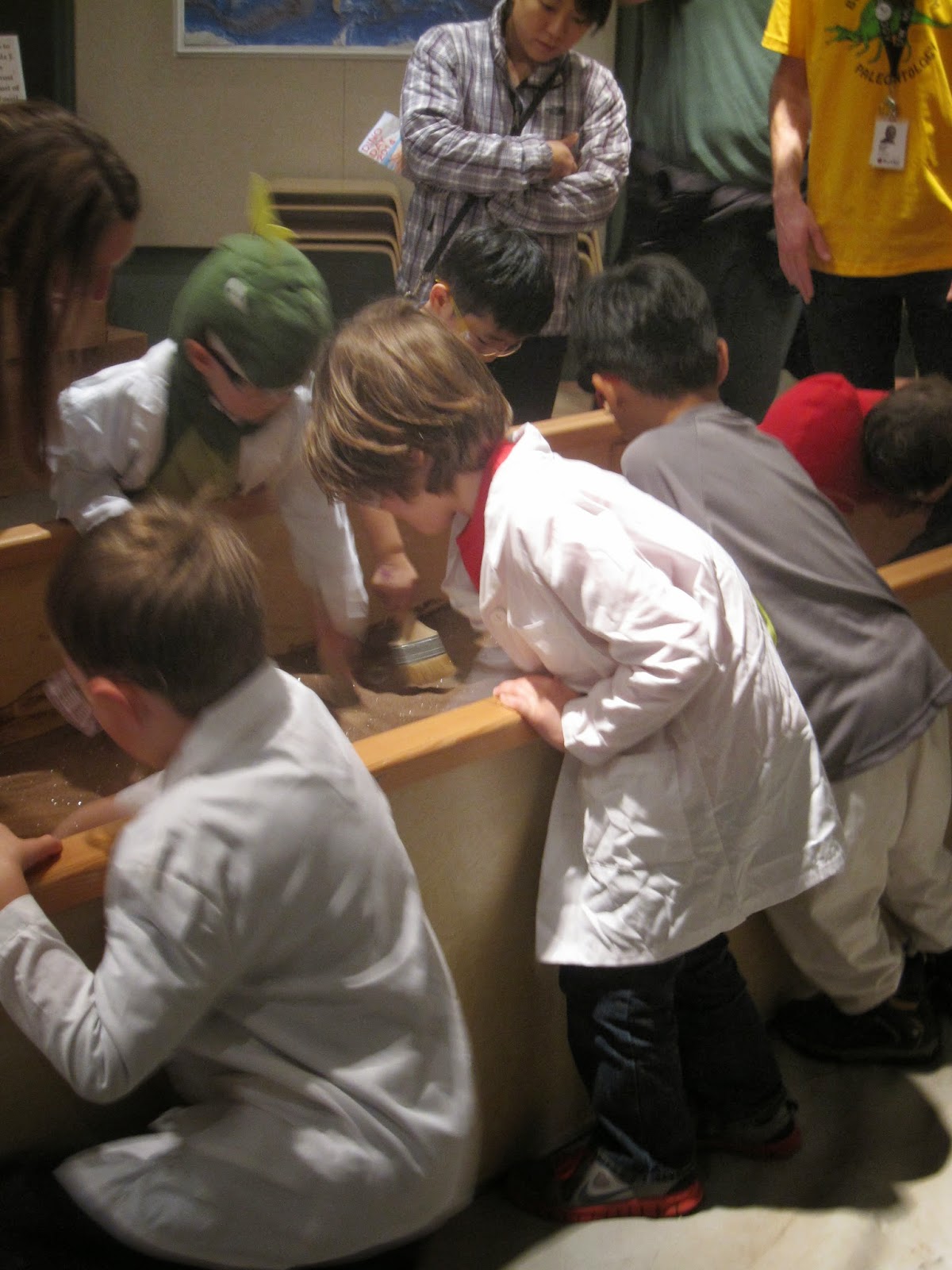 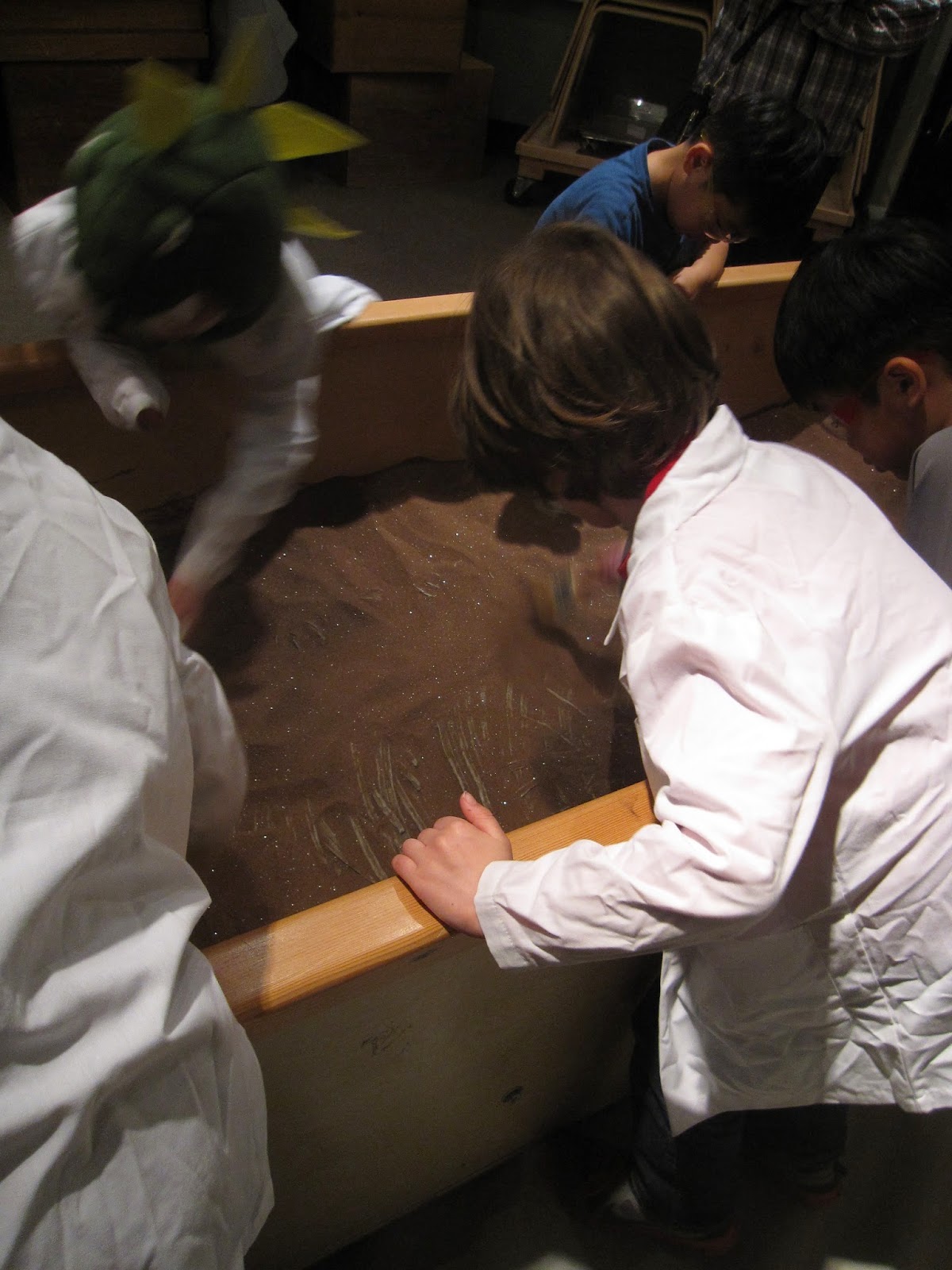 The kids got to "dig up" a fish fossil. I can never remember the names, sorry. It was entertaining to watch how they'd just brush the dirt in whatever direction, often covering up a portion that they'd just finished uncovering in their effort to unearth a different section.

They also had the mammoth tusk that was recently found at South Lake Union there on display. There was a line for that and Gareth didn't want to wait, so we never did get to see it up close, though I saw it from a few feet away. It's still mostly encased in plaster because it needs to be able to dry. But I thought it was pretty cool that they had it out for people to see, and cool to be able to see it, even if it was from a bit of a distance.

I had hoped we'd get around to the tusk before we had to leave, but Gareth got very engrossed in the dress-up area and playing dinosaur, so we spent our last half hour or so there. 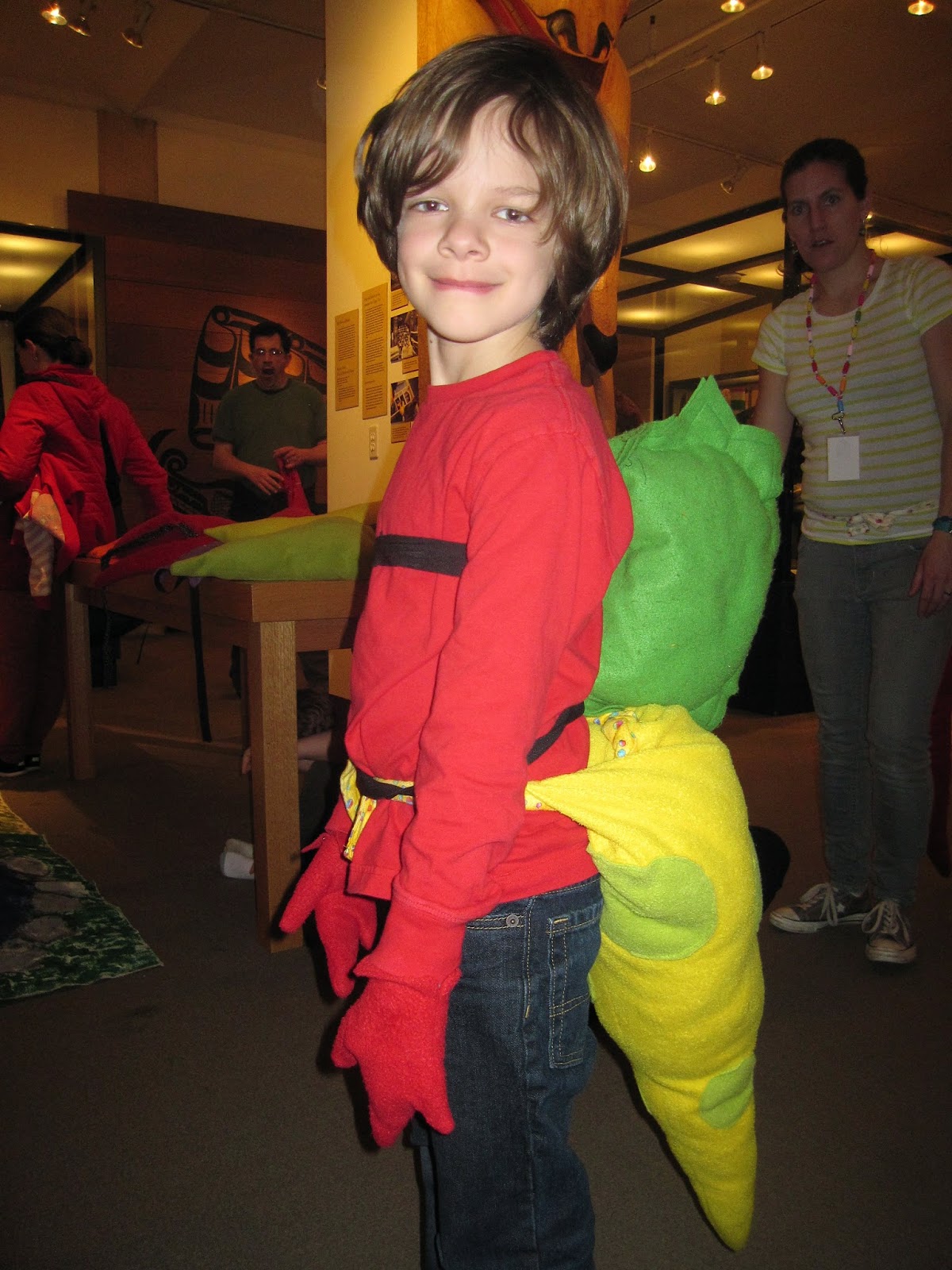 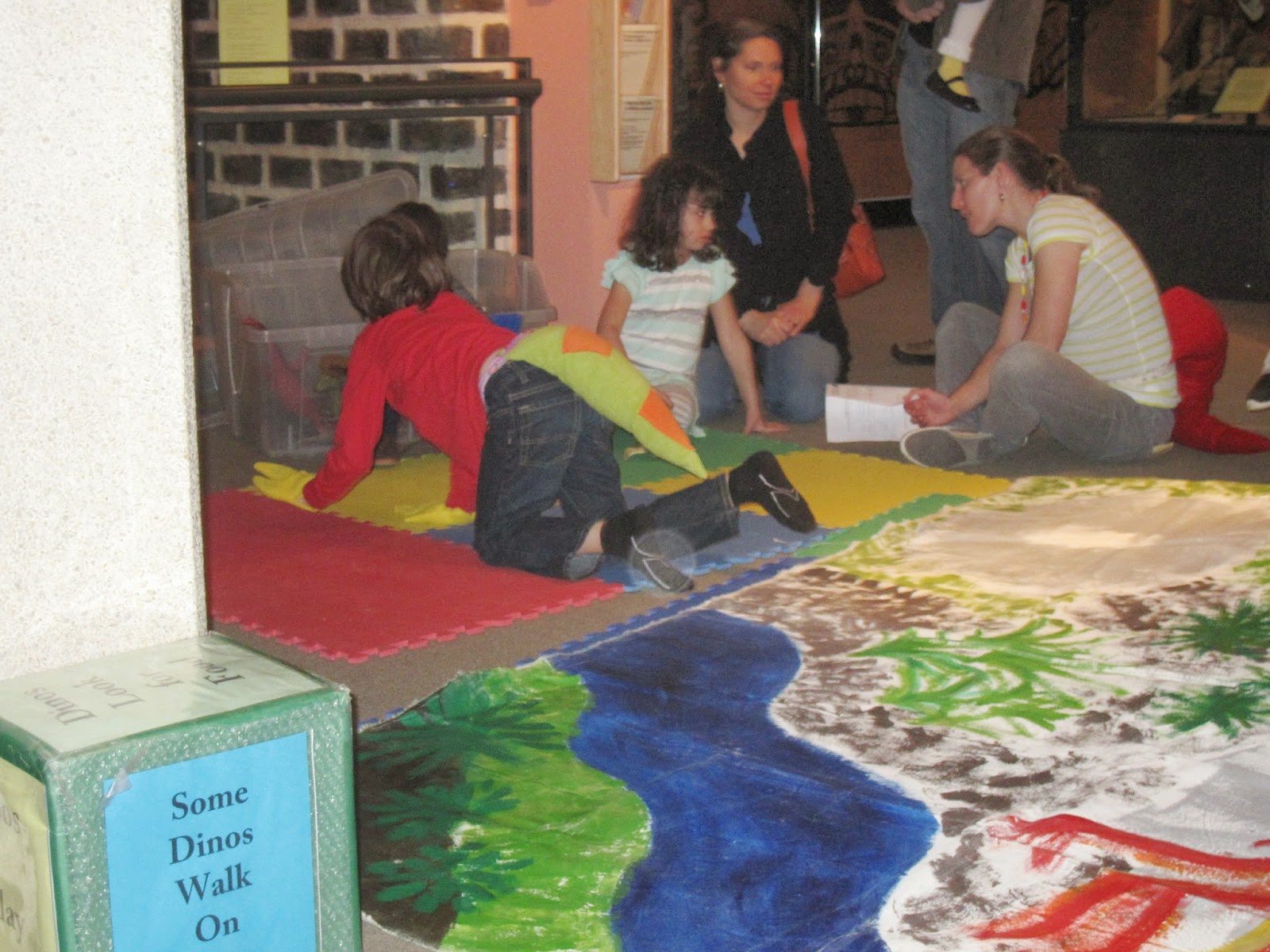 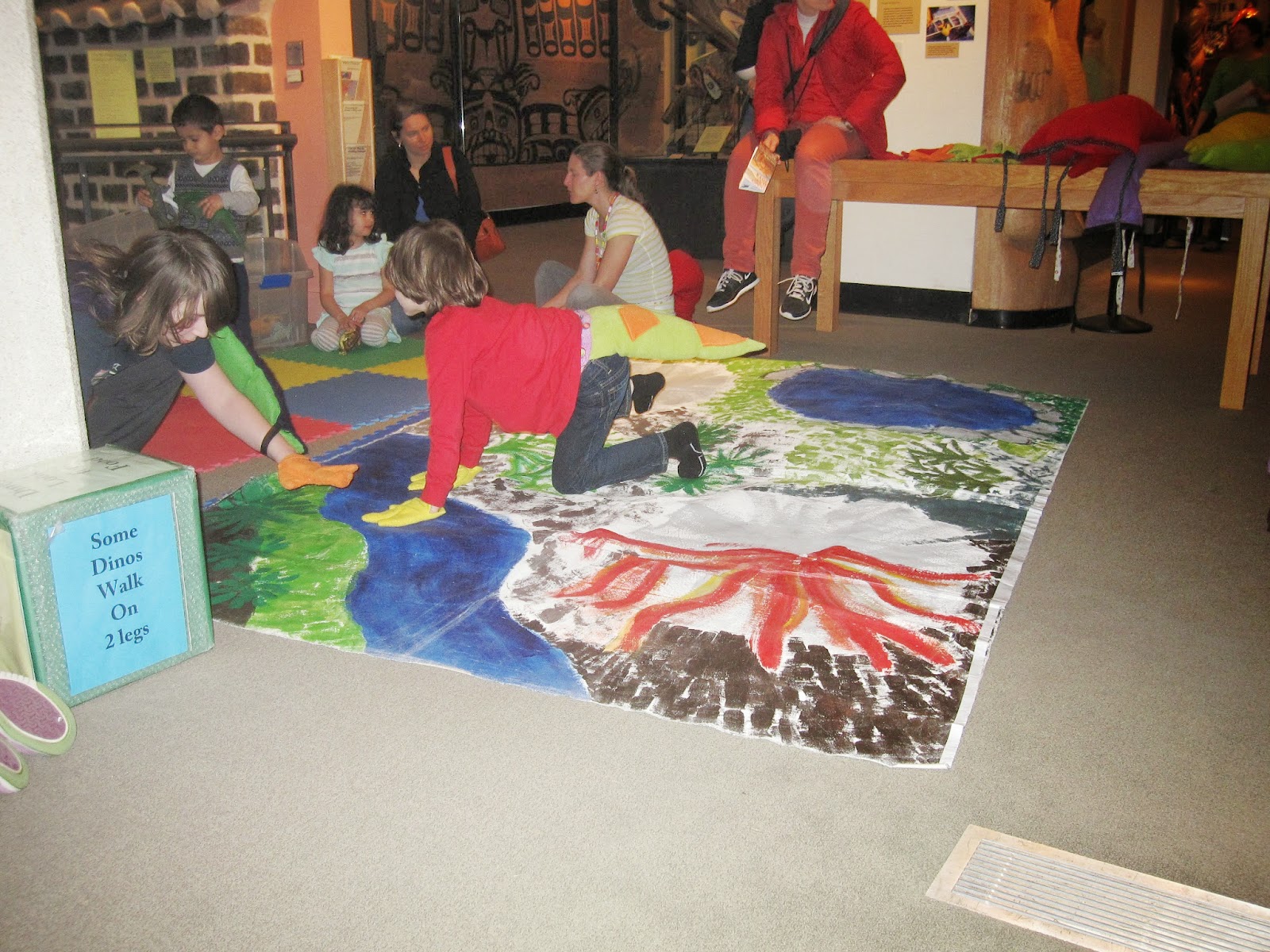