Last year my teacher started holding a carol sing-along the weekend before Christmas, so we headed out to that this past Sunday evening.

Gareth was crying before we left because I wouldn't let him bring a book to "entertain" himself with. I told him he was old enough to be entertained by the event itself and thus ensued a huge meltdown. Of course, when we got there he ended up having a good time.

My teacher also conducts the Greenwood Concert Band during the summer, so that is the group that plays. They played a couple of festive band pieces, which both years have kept Malcolm's attention. This year MJ McDermott (worked on the last local kids tv show back in the '90s and is now the meteorologist on one of the local news stations and someone who has sung with the band before) joined the band to narrate 'Twas the Night Before Christmas. That didn't hold Malcolm's attention quite as well, but he stayed semi-decently quiet through it. Then the sing-along portion started, and that never holds Malcolm's attention. Gareth enjoys that, but isn't generally interested in singing along until they do Jingle Bells or other songs he knows well. Ryan doesn't sing much because there isn't always a bass part, and Malcolm gets upset if I try to sing.

Gareth found The 12 Days of Christmas very funny, especially when the two "lords" sitting behind us went a-leaping across the hall, flinging themselves from one aisle of chairs to the next. Mal had gotten quite rowdy by this point, so he and Ryan went for a short walk outside. After singing several songs there was time for just a couple more so MJ asked if there were any that people absolutely wanted to sing. Since the crowd was sparse and Gareth was the youngest kid (excepting Malcolm) in the audience, she picked him and he, of course, chose Rudolph. Then she asked if he knew the extra parts, so he got invited to go up on stage and lead the group/sing the extras. The band initially started playing way too fast and Gareth got so flustered he forgot where he was, but MJ thankfully stopped them and told them they needed to slow down a bit and so we started over and he did great. It could have easily been an experience that ended in tears of frustration so we were grateful to MJ for turning it into a positive experience. Malcolm came back partway through, and of course he wanted to join Gareth up front. A fellow clarinetist snapped a picture of the boys with MJ afterward: 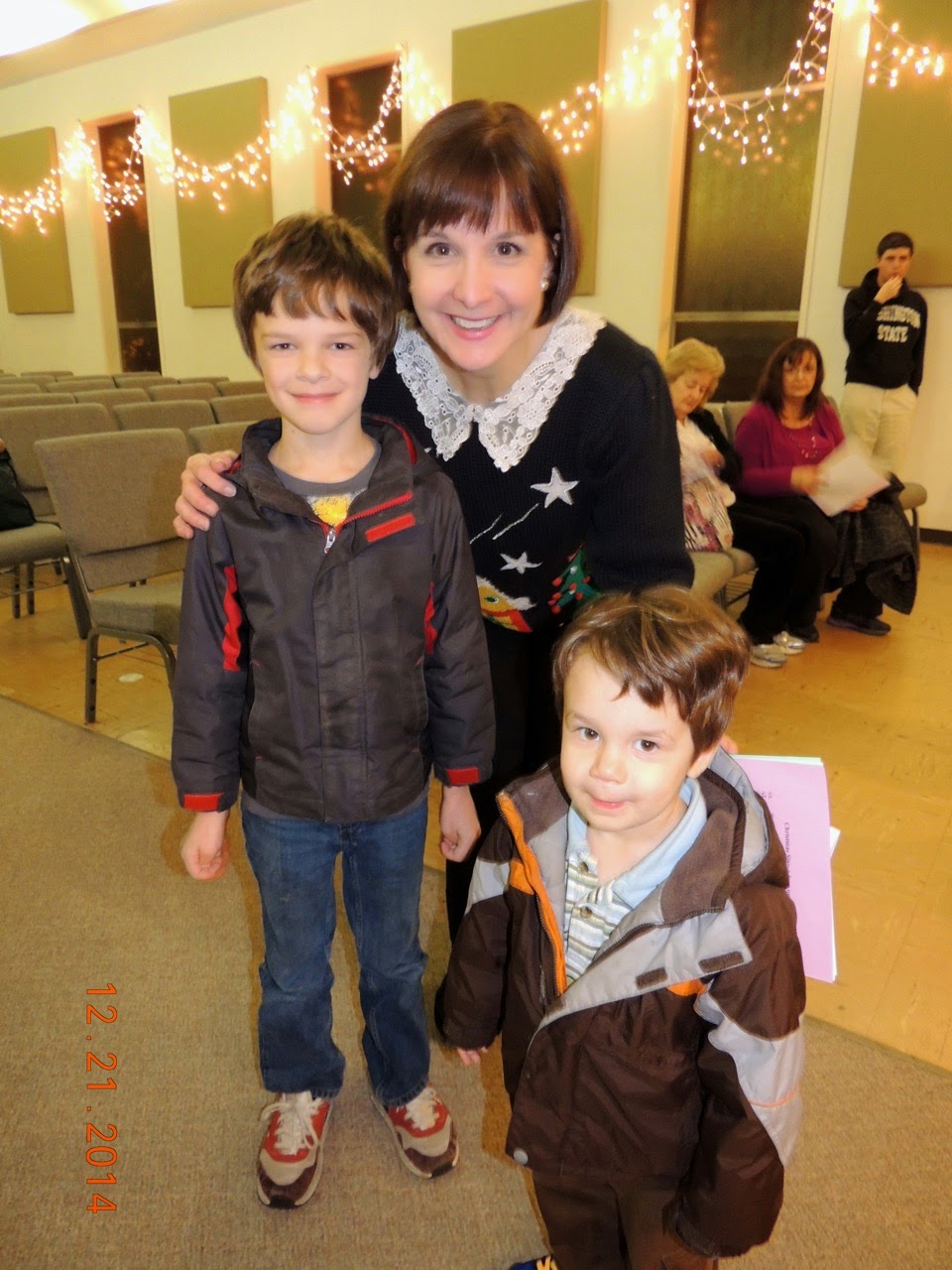 Afterward there were treats and a chocolate fountain. All my band/orchestra friends enjoyed watching Gareth wander around with his mouth slathered in chocolate. Malcolm was mostly kept away from the goodies, but only with much difficulty. He would've stuffed everything in sight into his mouth if allowed free reign. Gareth was really excited to have been able to get up and lead the group in a song and everyone was nice and complimentary to him afterward.
Posted by Erin at 12:02 PM