So I signed up for a ride called the Chilly Hilly. My friend got me to sign up by saying we'd ride his tandem. And now we're not riding the tandem, I'm riding alone. Which makes me a little nervous to say the least. The ride is around Bainbridge Island - about 34 miles. Of course, we have to ride to and from the ferry, so I'll be riding about 50 miles total that day. I've already told my clarinet teacher that if I'm not at rehearsal that night it's because I can't walk.

Thankfully we've had some lovely riding weather lately, so I've been able to get some good prep rides in. Sunday I rode on my bike on the Burke Gilman trail. I went 24 miles, but most of that is flat. Monday my friend brought his Fuji touring bike over for me to try out. The padding in cycling pants is definitely more effective when you have a less upright posture. My daytime class was cancelled Monday and Tuesday, so I got in a ride to school dropoff on Monday morning and then we did another ride Tuesday.

Initially the drop-down handlebars were awkward. I'm used to a mountain bike setup where the brakes and the shifters are close together. On the Fuji I can have my hands in multiple positions, meaning I might need to shift them when I want to brake, and the levers to shift gears are at the ends of the bars. That took the most getting used to - at first I felt like I was going to fall over every time I needed to shift. But, man, is it nice to have some lower gears than my bike has and the thinner tires that let me go much faster!

Our ride Tuesday was excellent for getting used to all of that. We rode down to the West Lighthouse, which is at the bottom of Discovery Park. This means a huge hill to go down (hands sore from riding the brakes the whole way) and then you have to ride back up the huge hill. I typically never let my friend pull the trailer, but today I let him pull it coming home from the lighthouse. There is no way I would've made it up the hill pulling that thing. But I did make it up without it! (Some park people tried to point out owls to us on the way up - my friend stopped, but I knew if I stopped I'd never get going again).

Mal didn't like the wind down at the lighthouse. We saw a huge eagle (is that an eagle? some kind of huge bird). 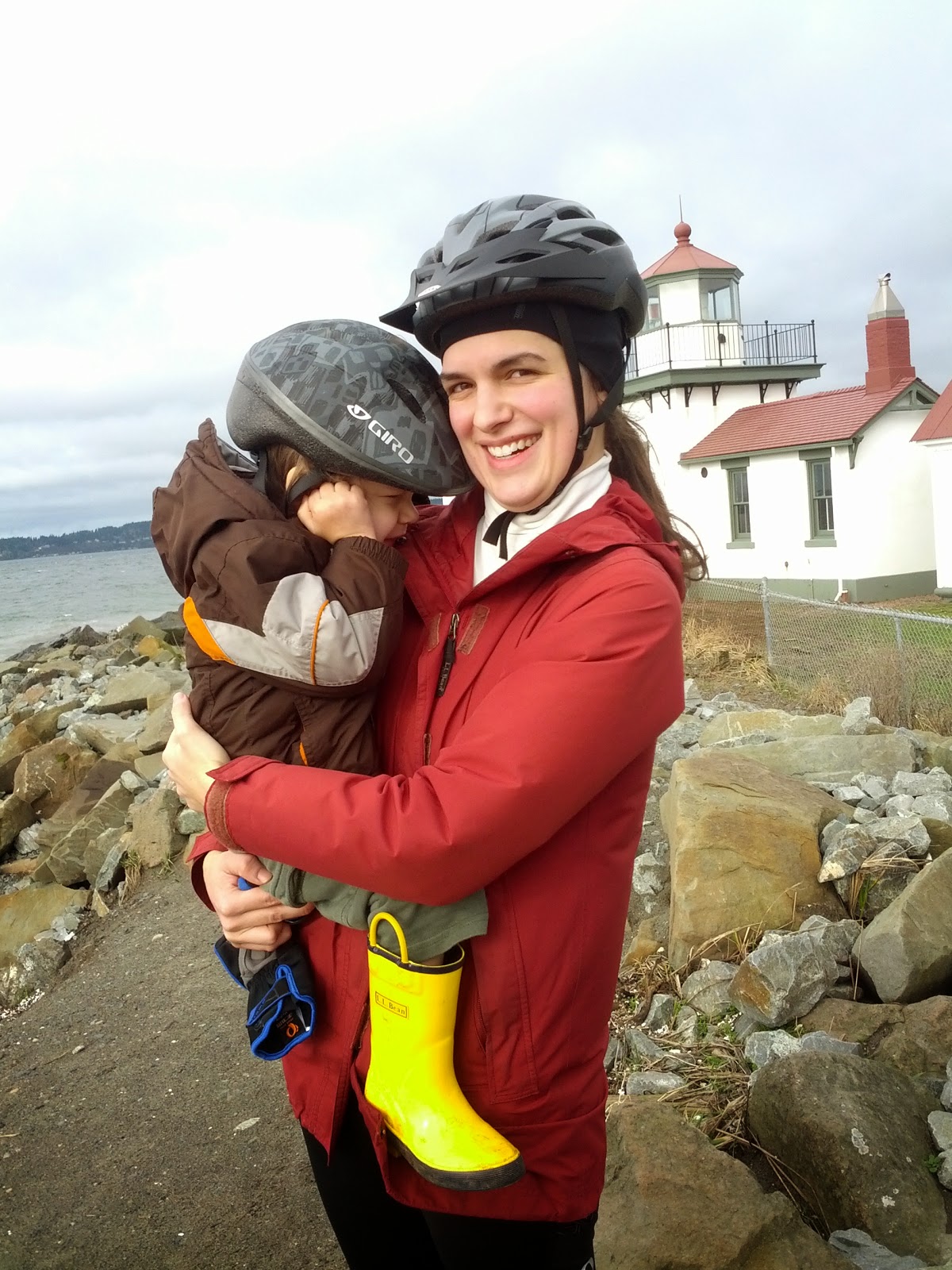 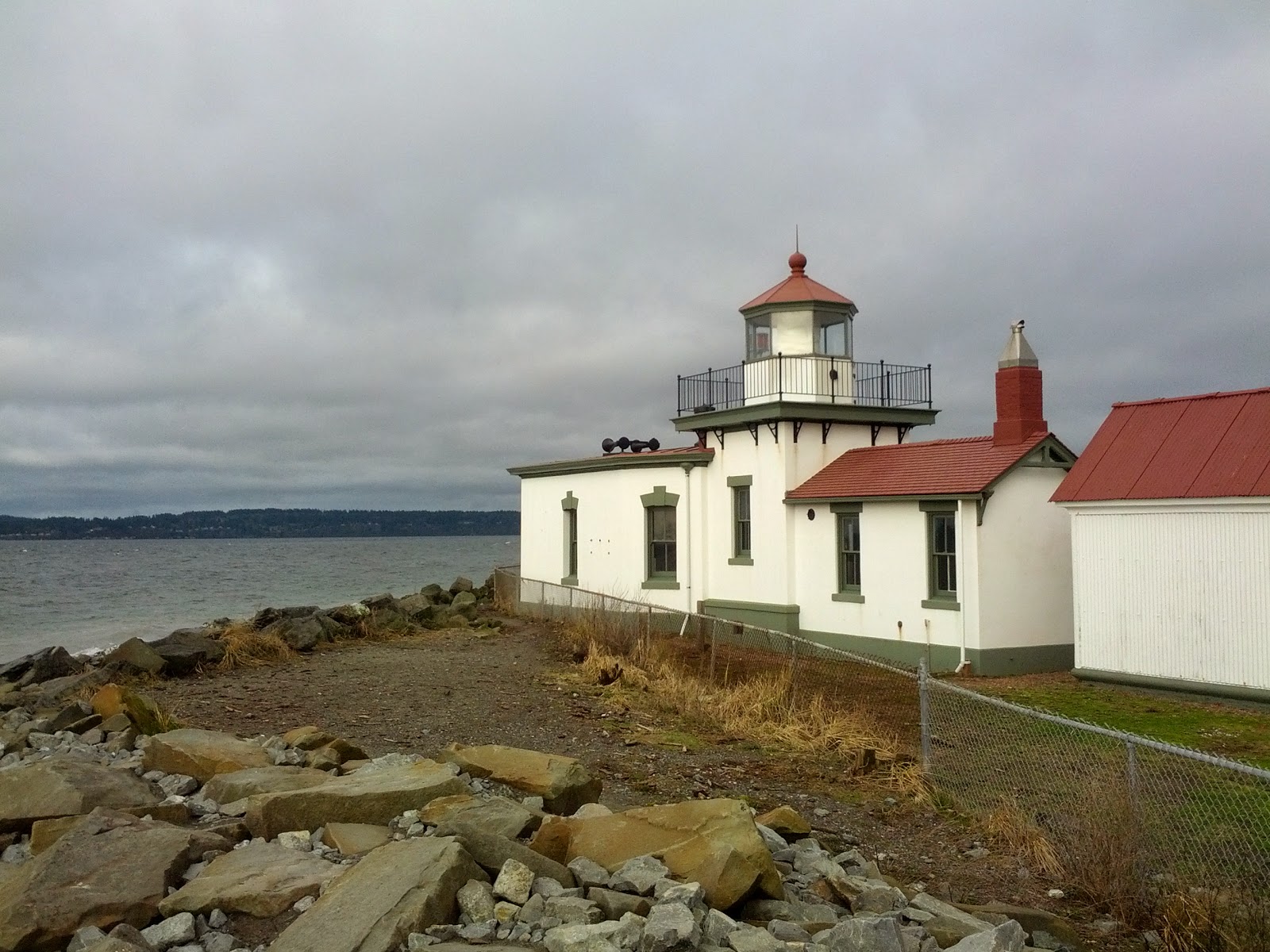 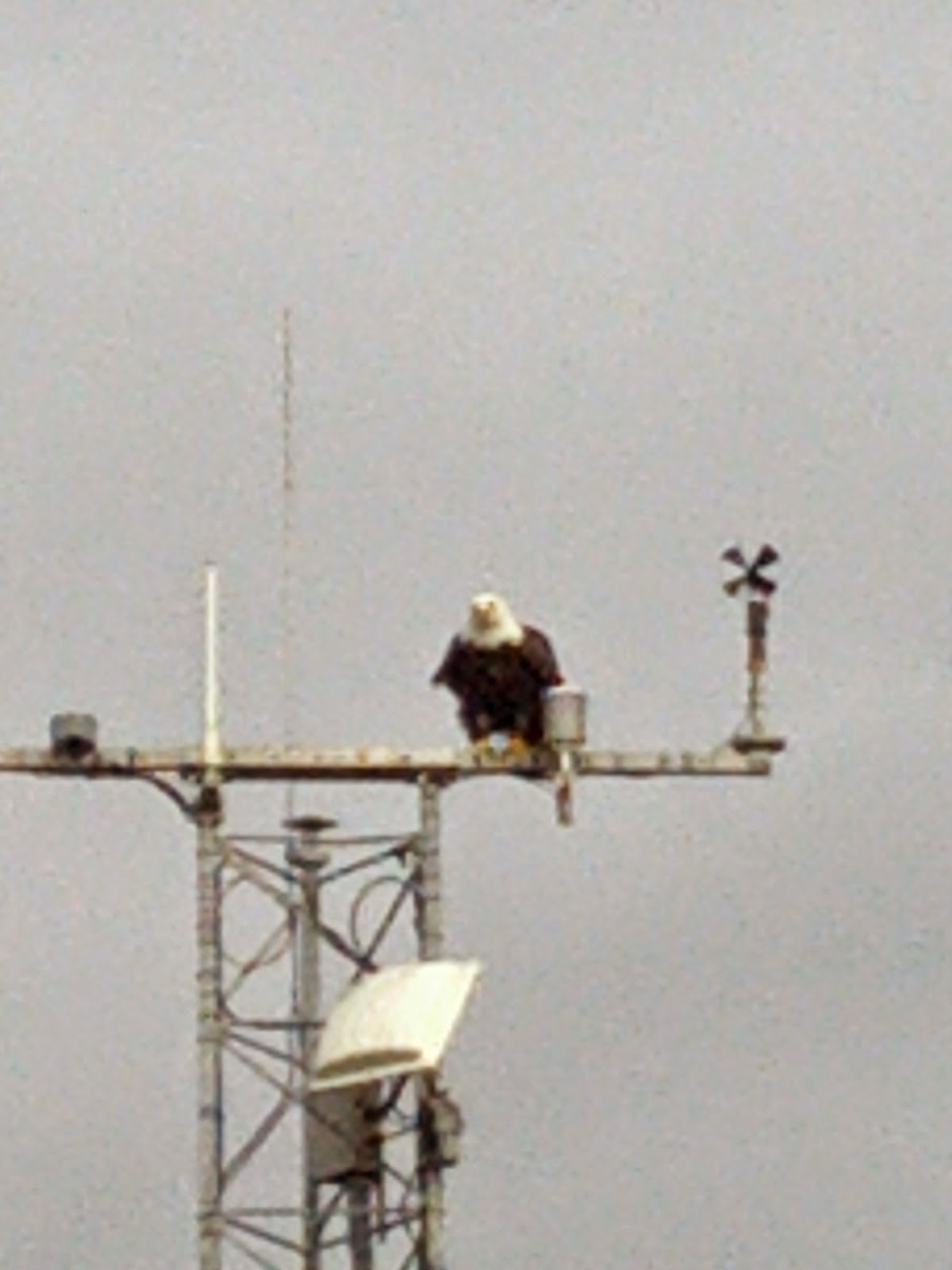 Then we rode through Magnolia, enjoying the lovely views and the houses that cost millions of dollars. On the way home we stopped at Top Pot Doughnuts. Here's Mal after using my trip to get napkins as an opportunity to grab a chunk of my doughnut and stuff it in his mouth: 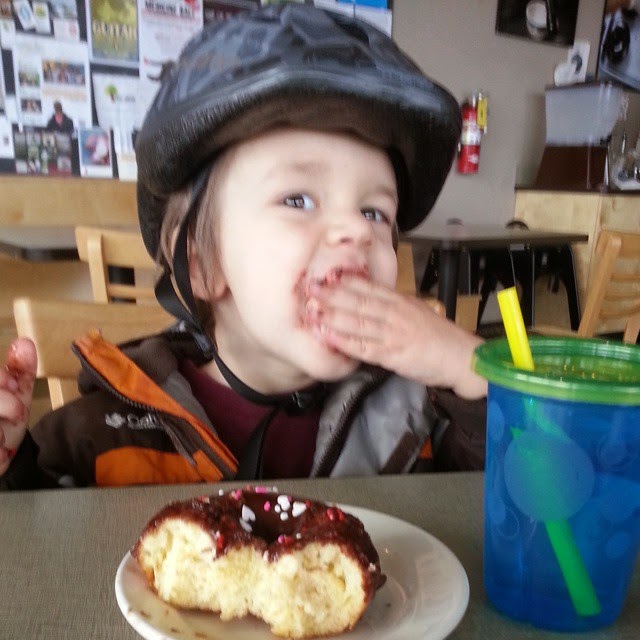 He probably ate about a third of my doughnut in addition to his own. Not that the calories will hurt him!

Thankfully the Chilly won't have any hills with the grade that the one to the lighthouse has. Or if they do they aren't for that long. Mostly low grade hills, but pretty constant. We'll do another ride Friday that will be closer to the length and mimic some of the hilliness that we'll see on the Chilly.
Posted by Erin at 6:25 PM

Okay, I have got to stop geeking out every time you mention Bainbridge Island, but I still got totally excited when I saw the words Chilly Hilly! Not that I ever did it myself (the only biking I ever did was mostly on my mission or on family trips to Sunriver), but we always enjoyed driving by all the bikers on our way to church and trying really hard to not hit them on Hidden Cove Road. Be careful on Hidden Cove and good luck!