The day after moving in we drove Gareth up to Camp Kirby on Samish Island for Camp Quest. I'd had him pull together all the stuff he needed Friday night so that I could run a load of wash Saturday evening and so it would all be in one place after the move Saturday.

He was the first one from his cabin there, so we didn't get to meet anyone else in his cabin. We signed him in, handed his stuff over to his cabin counselor, let Mal check out the totem pole and the water a bit, and headed back home. It felt weird to put Mal to bed in his room by himself that night. We spend the week assuming Gareth was having a great time.

We picked him up last Saturday. He greeted us with a big smile and immediately started telling us about camp. One of the first things he said was, "Can I come back to this camp next year?". He got to go kayaking and do some archery. He tells us he didn't try rock climbing, but will next year. And he opted against swimming after being told the water was cold (I'm doubtful it was since it's been so warm this summer). They had crafts as well. One day he made an architeuthis out of yarn: 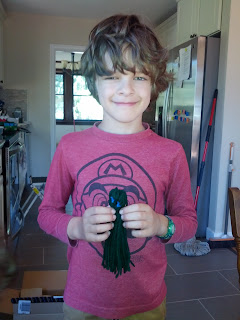 They did some problem solving/building type activities and sang the typical announcements camp song, and had a campfire with songs and stories. He says the food was delicious. Each cabin put together a skit. I haven't figured out exactly what the plot of Gareth's was yet, but he got to play the role of the Fartis, which is "just like the Tardis but it needs nuclear creeper farts to power it". Clearly a skit written by 8 and 9 year olds.

From his description it sounds like he had a great time - and we'll definitely plan on him returning next year. And I'm sure I'll be much less nervous sending him off next year since things went smoothly this year.
Posted by Erin at 1:16 PM