We've been helping a friend out with childcare this summer, taking Gareth's best friend for a day here and there. The past couple times we've just hung around our place, letting them play Minecraft, ride bikes, water play in the back yard, and hanging out with other friends at play street (you can get a permit here to close your street one day per week so kids can play in the street; the friend's we go to closes their street from 2-5pm, but another family from Gareth's class last year closes their street from 9-5).

But this past week we made a trip to Carkeek Park. We went first thing in the morning, hoping crowds wouldn't be too large then. There was a Campfire Kids daycamp going on, but even with them the crowd was totally manageable. We hung out by the salmon slide for a while and then Gareth and his friend wanted to head to the beach. Usually when we're at Carkeek I say no to the beach (because I always forget there's a beach there and don't plan accordingly), but this week I just went with what they wanted. And we had a great time.

Of course, the view was beautiful as ever. 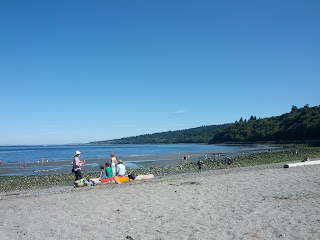 The big boys crossed the seaweed strewn rocks to get to the water and wade and play in the wet sand. They even found an intact shell with a creature still inside which they brought back to show us and then took back to the water. 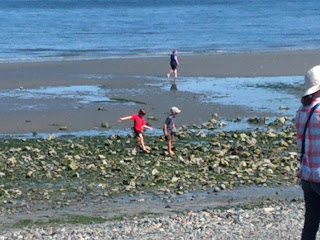 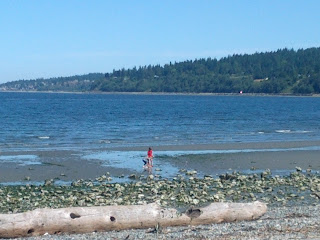 Mal preferred to stay in the dry sand with me. We found a couple logs to sit on and played with rocks and shells, took pictures, and ate snacks. The train goes by between the beach and the park, and the boys all enjoyed watching it. Mal didn't like how loud it was when the train whistle blew, but once he covered his ears he was fine. 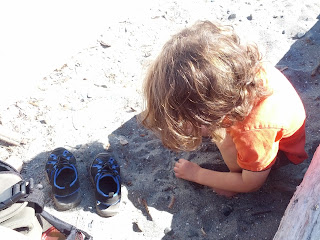 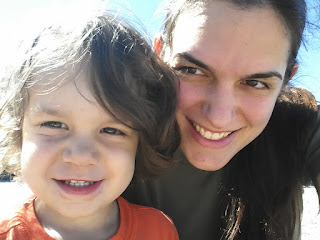 We've got about 15 pictures of close ups of Mal's face and him sticking his tongue out. He really likes to have control of the camera. 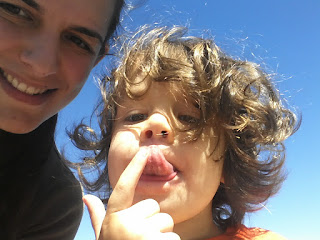 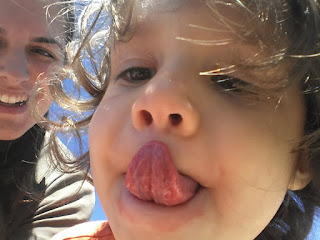 Gareth's friend cut his toe on a barnacle just before we left. The Campfire nurse was nice and gave us antiseptic and a bandaid to get us home. We got him bandaged up at home, ate lunch, and hung around the house for the next few hours doing the usual stuff (Nerf guns, Minecraft, playing with water outside) until it was time for him to go home. Aside from the cut toe, it was a fun day all around. And nice to have an excuse to just relax and have an outing in the midst of house stuff.
Posted by Erin at 8:01 PM