Ryan and I went to Elysian's (okay, Anheuser-Busch's) Great Pumpkin Beer Festival a couple weekends ago. Usually Ryan and festivals do not get along at all. But this one is pretty enjoyable. They have bunches of chairs out, so we usually snag a place to sit after a bit (this is key for Ryan, who hates standing for long periods). You get to sample some really great pumpkin ciders and beers (and the occasional mead or barleywine), they've got some great food trucks there, and you get to enjoy some fascinating people-watching. Ryan and I just aren't the personality types to get crazy into festivals, even with a little alcohol to help. But we do enjoy this particular one. It's fun to get out just the two of us and see how into such things others get. It's noisy, but not really raucous, and some people do dress in costumes or deck themselves in all orange. But there are plenty of people like us who are clearly not crazy party-ers. Works out to be a good combination for us. 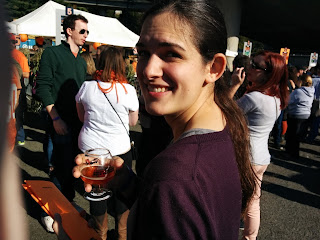 Ryan got a little in the spirit of things and threw on a shirt with some orange in it. I'm pretty sure I don't own any orange. 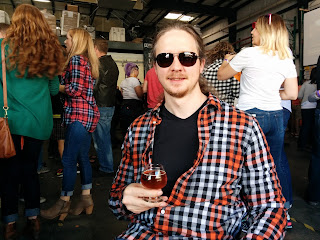 In the background you can just see a giant pumpkin (just above the beret). They had several of these there. That largest one is filled with Great Pumpkin I believe. Others were being carved by an expert carver. I overheard the carver say that the one he was working on they were going to use as the Great Pumpkin, but when they opened it it was moldy, so they sealed it back up with wax and relegated it to carving. 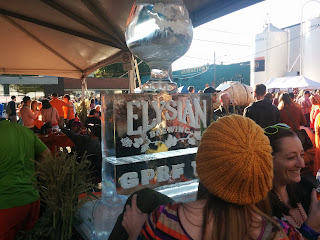 While we did that our friends the Redpaths took Gareth and Mal with them to a family cider press. The kids had a blast. Mal apparently helped throw some apples into the chopper. Both boys loved playing on the trampoline. 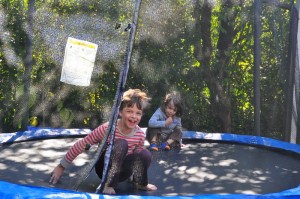 And Mal made a friend of R2D2. 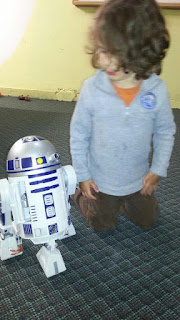 At some point in the afternoon Mal climbed into his car seat and took a nap. He woke up shortly after this picture, and you can see he looks less than thrilled to be awake. Which is probably why he got to play with one of his favorite things - the elephant. 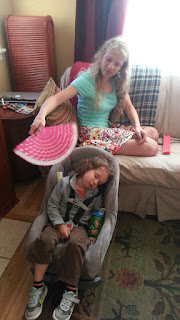 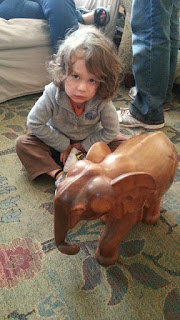 They got to eat donuts and drink fresh apple cider at the press. Then afterwards they went to another friend's house for dinner, which is where we met them when we got back. We got to sample the cider and it was tasty and not overly sugary like what you typically can get in the store.

This past weekend was mellow as I came down with a cold courtesy of Mal attending preschool. I was going to host a couple of my friends Saturday evening but decided I should postpone since I didn't want to get them sick as well. A friend of Ryan's invited us to a corn maze on Sunday. Ryan is slightly terrified of taking the boys anywhere by himself (because of Mal being 3), so I was a bit surprised that he said he'd do it even after I pointed out that he'd have to take them by himself since I could use the quiet house to get some rest. We kept it a surprise, just telling the boys they were going on a drive with daddy while I prepped some lunch for them. When they got home several hours later they were bubbling with excitement over the donuts and the maze and the "punkins". Mal apparently enjoyed the mud and told me all about a caterpillar that he touched and the hay ride. 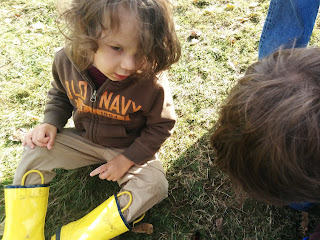 Sitting to pet the caterpillar. If you look very carefully you'll see a bit of it's fuzzy body at the bottom of the frame. 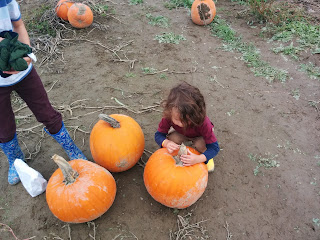 Mal loves his "punkins". He was so thrilled when I finally let him help choose one at the store several days ago. He made me set it in the passenger area of the cart so it could be next to him and leaned his head on it while we finished our shopping. 3 year olds can have their adorable moments. 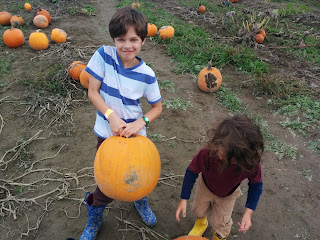 Standard pumpkin patch picture with a cute kid. Mal told me all about how he needed help to pick up a pumpkin when he saw this picture. 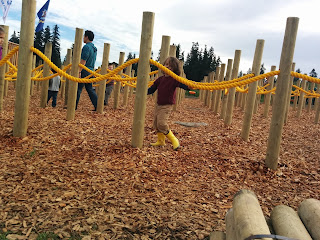 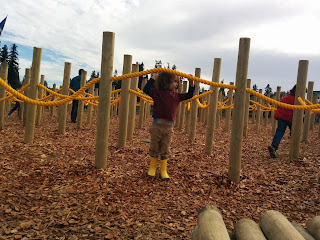 And the rope maze. I think that's what these are. They had a kid's maze, so maybe that's this. Ryan didn't have time to take pictures in the big corn maze because he was busy carefully following the little map so that it wouldn't take them until dark to make it through. Prodding a 3 year old through a corn maze isn't exactly an easy task, I'm sure.
Posted by Erin at 1:10 PM