It seems every year we have one or two traditions that we just can't pull off. Last year we skipped going out to breakfast because the thought of taking Mal to a restaurant was terrifying. I think we'll do that one this year, but between school and various parties we got halfway through December without getting a tree. Which isn't unusual, because we often purposely wait until the second weekend in the month. But I had a final on a Monday morning (that various events had left me unable to study for until the day before) and waiting until the next weekend would leave us with a tree for less than a week before Christmas (and also seriously limit our selection of trees). So in order to actually get a tree we opted to forego cutting down our own tree and just go to a lot to get one. In the end we went to a local nursery, paid a rather exorbitant price, but got a perfectly nice tree and were able to get the whole thing done in an hour. As you can see, we still have a pumpkin hanging around from Halloween. It's not the only Halloween item out still. 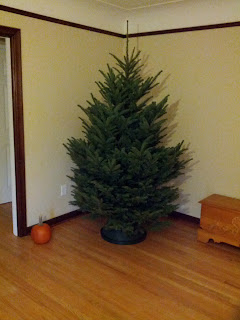 Mal was very upset at the nursery when we walked back to our car so we could drive it around to where they'd load the tree on it. Because we didn't have the tree with us he thought we were leaving without a tree and was ready to hyperventilate because he was so distraught. We managed to calm him enough to explain to him that we were getting a tree. Then when we got home we had to break the news to him that we wouldn't be putting the lights on right away, and he was upset again. He managed to survive until Monday afternoon when he begged me repeatedly to put the lights on, so since I was then done for the quarter I acquiesced. He's insisted the lights be on from the moment he wakes until he sleeps ever since. 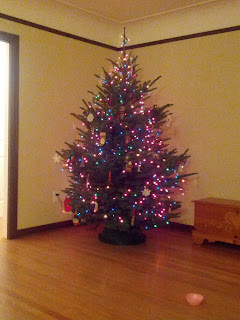 We made some gingerbread cookies this past weekend and I was surprised at how interested Malcolm stayed in it. Both boys came along when I was just starting to roll out the dough and helped cut out the cookies. When Gareth was three he'd usually help with a few cookies and then get bored and run off. Mal stuck with it through all the dough and wanted to help cut them out and transfer them to the cookie sheet. While it was occasionally frustrating to have so many helpers, I'm glad they enjoyed it this year.

I attempted substituting dark chocolate for the milk chocolate in my fudge recipe this year and it did not turn out well at all. I'm not sure why - some kind of content difference between the milk and the dark chocolate or a humidity thing? No idea, but it was frustrating to have wasted so many materials. So this year will be all cookies because I'm annoyed enough to not want to try again. Normally I'm more stubborn about trying things again, but I'm tired this year. Maybe because I've caught yet another cold from Mal (thank you petri dish of preschool!). I'll look up some new recipes during the year and see if I can find a promising dark chocolate one to try next year. Our recipe we've always used with the milk chocolate is just way too sweet anymore.


Ryan and the boys watched Elf the other day. I guess Mal was tired because he fell fast asleep while watching: 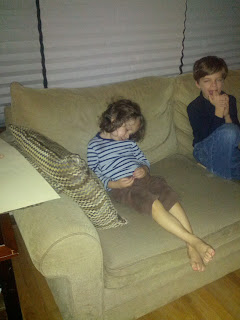 Growing up my grandma gave us these cubes that could be put together to say "Merry Christmas", "Season's Greetings", or "Happy New Year". They spent most of their time saying anything but those three things. My mom knows how much we enjoy getting to play with the block letters, and when we only had Christmas (with Thankful on the back), we found we could make a lot of curse words, but were severely limited in what else they could say. So as part of our countdown my mom has sent some more letters to add to the mix. Some are clearly for other holidays, but we can combine what we've opened so far with what we already had to make statements such as "fart shame" or "my cats shimmer" or "'Murica": 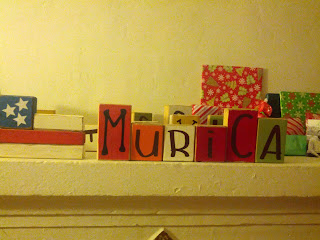