Several weeks before our trip I showed Gareth options for things we could go check out while in Albuquerque. He got very excited about the Rattlesnake Museum, so I made sure we went and saw that. Sunday afternoon we headed over to Old Town to do that. Thankfully the tickets weren't particularly expensive, because it was rather disappointing. While they certainly had rattlesnakes, they also had the space cluttered with every item that had ever been branded with a snake or was loosely connected to snakes in any way. And rather than have one single gift shop space they had cheap trinket items scattered throughout the museum. 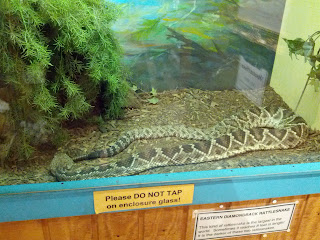 Mal really, really liked the tortoises and kept insisting that we go back to them. 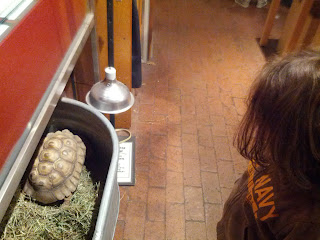 At least he spent some time checking out the snakes and other animals there. Gareth only had eyes for random things spread through the museum. 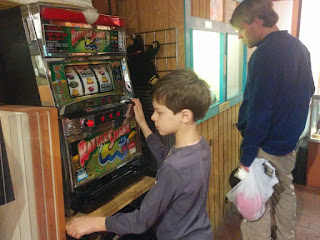 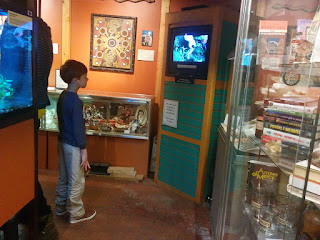 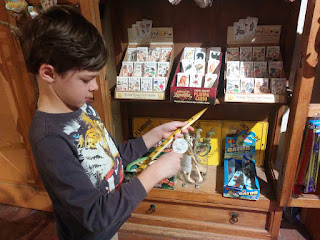 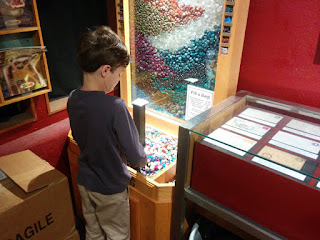 So, all in all, not really worth it. Snakes are rather boring as most of them hide in corners or sleep anyway. But since it was a request that Gareth made, I'm glad we did it just to fulfill that request. After we finished in the museum I made us take a short walk to the Old Town square because I'd caught a glimpse of the sad, er, I mean grand, Christmas Tree there. 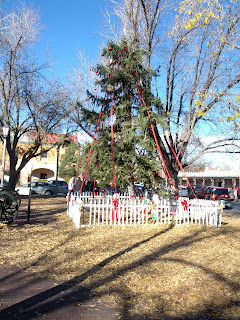 Old Town itself looked like it was shops full of tourist trinkets. So I think I'm okay with not exploring it further on future visits.

Monday we got all our stuff packed up and then spent the afternoon with Ryan's dad at a park across the street from the first house they owned in Albuquerque. I'd never seen that house before, so that was interesting. And we all had a good time throwing frisbees around and playing on the playground. Gareth was very sad that evening as he said goodnight to everyone. Mal was more oblivious. Everything went smoothly with the flight home, aside from Mal and Gareth continuously pestering one another whenever we were sitting in the airport.

When we arrived in Seattle I had a clarinet choir friend pick me and our luggage up so we could go to dress rehearsal while Ryan took the boys and headed home on the light rail and bus. When they walked in the door Mal said, "No! I don't want this one!". Guess it took him until walking in the door to realize he wasn't going back to Grandma and Grandpa's house. And then he went to the fridge, opened it, and proceeded to ask for and eat a peanut butter and jelly sandwich and apple slices with peanut butter - two things I'd offered him many times in Albuquerque and which he'd consistently voiced staunch opposition to throughout the trip.
Posted by Erin at 1:35 PM