Well, the cookie dough sale is done. I had a bit of a scare when I was re-counting the money before turning it over to the PTA because I kept coming up short. But I found it. Delivery went smoothly. I had a good group of parents helping me fulfill orders and deliver small orders to desks. We got them all portioned out before school finished. It was a bit hectic once school let out but not too bad. Thankfully those with very large orders had come to pick them up before school got out. I hung around until we'd sorted out where most of the orders needed to go (this kid is in play practice or aftercare or taking the bus and will come back with a parent), and then left with only a few orders still hanging around. The teacher in charge of all of this told me she'd call me if they were still there when she left later. She didn't call. And no one has contacted me with complaints about errors in their order, so I think it's safe to say we're done.

My presentation went well. In my opinion ours was one of the better ones. Far too many people word vomited on their slides which is a huge turn off. We were careful to have pictures predominate, with just a phrase or two per slide and then elaborate verbally. It helped a lot that our topic wasn't one that got too technical. We talked briefly about the history of the "Mediterranean" diet and how it was popularized, touched on the statement from the book Big Fat Surprise that we were evaluating and what the author's intent was with the chapter our statement came from (her intent was to show that the diet has been over-hyped and that claims about it exceeded the evidence), then we talked about the study she cited as evidence of this, which turned out was a pretty good study to use to show her point. We also found a more recent summary of studies on this particular olive oil component, which only further supported her point - a lot of the research done thus far on this phytochemical is preliminary and we need to do a lot more research, especially in vivo research, to determine if this compound can be significantly beneficial. And that's how we concluded - talking about our evaluation of her use of the study and agreeing that we don't yet have evidence that olive oil will cure us of all our ails.

So that's a couple things done at any rate. It's been a fairly relaxing couple of weeks, but now I need to remind myself that I do still have a final to take and that I need to study for that. That's boring though. Here's some of what we've been up to:

I've used some of the lower-stress time to go through the kids' clothes. Got rid of a bunch of 3T stuff and pulled out some 4T (except that he still fits some 2T shorts and 3T shirts). Anyway, we found these pjs in the 4T box. They're a bit big, but Mal fell in love and decided to have a pajama day after that: 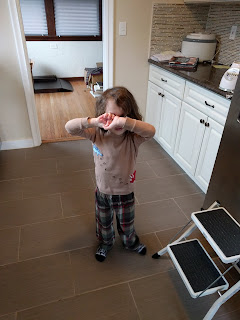 This past Monday my friend and I rode on a tandem to Green Lake. We meant to go to Costco, but it was really cold and windy, so we went for coffee instead. We pushed our Costco ride to Wednesday, by which point the weather was much nicer. But it did mean taking singles and two trailers since we then had Mal with us. Mal had been so sad when he realized I was going for a ride on Monday without him, so he was excited to get to see our friend and be included on Wednesday. I just about died when the first thing our friend grabbed at Costco was the bag of potting soil. But he does Costco runs on his bike all the time. This was his haul: 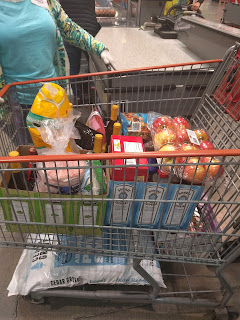 I stuck to lighter weight items. Cheese, vanilla, pirate booty, and a couple boxes of snacks for Gareth's classroom. As it was I struggled getting up the hills going back home (I had Mal in the trailer as well, so maybe 60 lbs). My friend weighed his trailer before unpacking when he got home. 173 lbs. And he had to ride back to his house after leaving mine, another few miles. I don't think that will ever be me. But when I went to help Gareth's PE class with their biking unit the next day, the teacher used this ride as an example for the kids of how practical biking can be and talked about how when practicing on the safe playground they need to be in the mindset of being on the road (having to watch for traffic, yield, follow rules of the road, etc) so that one day they can get groceries or haul kids on their bike.

Mal's car seat had expired a while ago, and I finally got around to the daunting task of getting a new one. I eventually asked for suggestions in a mom's group I'm in and a car seat tech chimed in with very helpful information about the two I happened to be looking at. The new seat arrived yesterday (despite my attempts to get it to not arrive until today) and Mal is very excited about it and it's redness. He fell asleep in it this afternoon after we visited a friend: 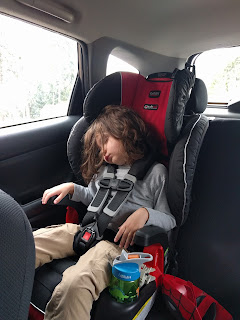 It's got a "click-tight" system, which allows you to easily harness the seat with just the seatbelt. It took about 3 seconds to have the seat in the car and it's in there tight. No climbing in the seat to knee it back or push it down or whatever. Just thread the seatbelt through, click the seat bottom back in place, and good to go. It's awesome. And he'll be able to be in the 5-point harness forever (Gareth is still a good 30 lbs below the harness limit for this seat!), but it can transition to the high back booster as well, fitting up to 120 lbs, which is forever for my kids. Gareth is actually a bit jealous and was trying to tell me he needs a new seat as well. Sorry, kid, the one you have is perfectly suitable until you're ready to sit without it.
Posted by Erin at 5:24 PM

So many things to say to all this...

-I thought coconut oil was supposed to cure all ills now?!?!?!?! Don't tell me that clickbate article I read was wrong???

-I can't imagine ever biking to Costco for groceries. Even when it was super close, the idea of hauling all that stuff + kids would never even have occurred to me... But I'm glad there are people out there who aren't as lazy as I am.

-Keeping up with the kids' clothing and the proper sizes is such a pain. It's not actually that difficult to do it, but it seems to require a lot of mental energy or something.

-And speaking of lazy, when it comes to carseats I will admit that I'm the worst Mom ever. Yes, I have my kids in carseats and booster seats and all that stuff, but they're all totally out of date and I tend to use the weight stuff and Pediatric recommendations as *only* being recommendations. Because the idea of keeping my kids rear facing for two years and buckling a five-point harness until they're five just kills my soul. I'd stop leaving the house, and when I did go places, I would wind up leaving my kids in the car to avoid having to unbuckle and buckle them all back in again. So I think I'm choosing the lesser of evils in my method, but I suspect plenty of people would destroy me over these choices. Ah, well. Hopefully it never comes to that... I swear I'm a really good mom in plenty of other ways!