We've officially got five years until Gareth is high school age. As we've lived in Seattle for five years already and know how quickly that time span goes, this is more than a little disturbing.

Gareth initially wanted a video game party, preferably with us renting one of those trucks that are outfitted with everything needed for various video games. They run about $350 per hour, so there was no way that was happening, despite Gareth telling me it is "totally worth it". I just laughed at him. In the end he decided he'd survive if we just stuck to playing Minecraft.

So we put on what was probably the easiest party ever. We have a few computers with the game on it, and asked friends who were able to bring a laptop. I did learn that I should've sent a reminder to parents about that bit. But a couple kids survived having to take turns playing. I grabbed stuff to make a perler bead Minecraft craft (basically this kind of thing and magnets/pin backs/keychain rings so they could make it into what they wanted) so kids could have an activity to do if taking turns to play had to happen, but in the end they were content to just watch the other kids play when it wasn't their turn. It took several minutes to get everyone set up, they played for about an hour, then we had about 20 minutes left to do cake and presents. It went by really quickly and if we did this party again I'd probably extend it from 2 hours to 2.5, just to give them a little more play time.

My mom wanted to make something using her fancy shmancy cutting machine thing, so she sent these awesome goody boxes: 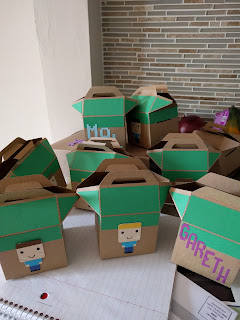 I got some Minecraft minifigures to go in them. I was initially thinking they'd come in their usual boxes, which would take up most of the space in these boxes. But then I ordered them in 3-packs on Amazon and they were not in the usual packaging. A single minifigure in the box looked kind of lame, so I ran out and got a couple candy items that are Gareth's favorite and threw a couple of those in each box as well.

Gareth fell in love with the more complicated looking cakes we saw online. I was ready to totally dismiss them, but then saw this one in our image search. We watched the video and I realized it would actually be incredibly easy.

The day before the party Gareth helped me make 1.5 batches of Rice Krispies Treats, which we put in a single 9x13 pan. Mal excitedly bounced around us, begging for extra "shmashmellows". Then Gareth helped me make the jello. Rather than following the video person's instructions, I just used the box instructions for jigglers. This made for a darker "water", but I liked knowing that it definitely would stay solid at room temp. for however long I needed it to.

Then I made up our German chocolate cake recipe. Store bought cakes (which I used for Mal's cake a few weeks before) are way too "airy"/crumbly to be able to cut into blocks and move around easily. I knew that this cake would be moist still, but also dense enough to cut up how we needed (not to mention delicious!).

The morning of the party I assembled the cake. I initially was trying to make sure all the blocks matched up nicely size-wise, but then I decided to add some extra "dirt" blocks, and when I put the "sand" blocks back around them I wasn't as careful about matching them up perfectly. And when I cut the jello I was even less concerned about this, so hence the occasional bit of overhanging sand or water that doesn't quite fill the block. I figured a bunch of 9 year olds weren't going to be too picky, and I was right.

Then I made up some chocolate frosting to stick the chocolate cake layers together and some green frosting for the grass. Using the grass tip took some practice - at first it was all mushing together and looking very un-grassy. But I eventually got it figured out and I think it looked pretty cool in the end. 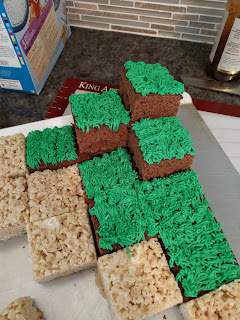 I added the water blocks and a few minifigures to complete the scene. 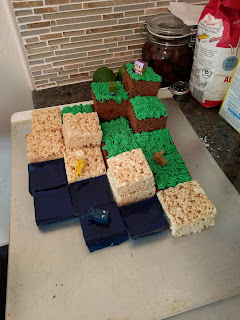 The kids were all quite excited about the cake. And I'm excited by how easy it was. Plus, most of the pieces are already cut, so serving it is a breeze! I let each kid choose two blocks.

After the party Gareth chatted with Gram for a bit. He was pretty focused on checking out all his gifts, so I actually did most of the chatting. Then we had his chosen birthday dinner of chicken salad and opened family gifts. He had a great day and it seems to have been a good conclusion to spring break.