The boys have been on break this past week, though I haven't been. We started off the break by having Gareth attend one of my concerts, Edmund Stone: "The Score" in Concert. Every Saturday and Sunday Edmund Stone hosts a program called "The Score", which is all about film music - he gives commentary and plays bits from the soundtracks. And that's what we did for this concert, just with our orchestra playing the music live. We played bits from North by Northwest, Star Trek: Into Darkness, Harry Potter, Dance of the Hours, William Tell, etc. It was an incredibly fun concert to play, if a bit stressful to put together as we only had two weeks between our previous concert and this special concert. Gareth enjoyed it and I think Ryan would have as well. Sadly, Ryan was home with Mal since Mal isn't ready to sit through concerts yet.

I had class Monday-Wednesday mornings. The boys spent a couple days with the family of a kid in Gareth's grade. They have one class together, so Gareth kind of knew who this kid was, but hadn't spent much time together. The kid's older sister was technically watching them, but the boys seemed to get along really well. Nice to have gained another addition to our babysitter list, as I lost a bunch to college this year and some others are often too busy. My boys had fun playing with their gigantic dogs (they have two dogs, the kind that are like small bears) and their rabbit. Mal was super excited because they had a Wall-E toy, and books with Iron Man and Hulk in them, and a Death Star toy, and a Jack Skellington toy. Many of his favorite things, all in one place!

The last of those class days they went to a friend's in our old neighborhood. This friend happened to get several free tickets to a Mariners game, so after class I took the bus down and met them at the stadium. By the time I got there they'd found the play area. I grabbed some food and we let the kids play for a bit and then headed back to our seats. Mal wasn't interested in actually watching for long, and all was lost when our friends came back with ice cream. Both boys wanted some as well, but I was mean and insisted they eat healthy food first. Mal, stubborn kid, refused and whined at me. I managed to temporarily distract him with my phone camera. 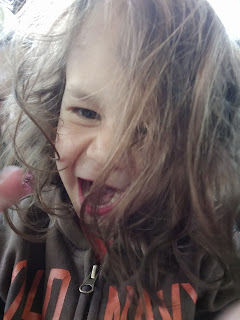 That only worked for so long. We made it until the 6th inning before heading back to the play area. The kids hung out there until the 8th inning, at which point we all decided it was time to head home so we didn't get stuck in rush hour traffic. Mal dozed off while looking out the bus window. 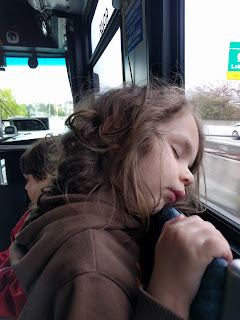 The next day we watched one of Gareth's best friends. He patiently accompanied us to an orthodontist appointment. Gareth's responded well to the palate expander and will have the brackets for braces put on at the end of June. We headed to a local park for the kids to play, then to a local toy store. Spent the rest of the afternoon at home. I took a much-needed nap (I have a cold) while the kids played video games.

Before we knew it we were at the last day of break. Nothing too exciting, just a swim lesson for Gareth. Gareth got to end break with a birthday party. Both kids headed back to school today, dressed for summer because it's suddenly insanely hot here.
Posted by Erin at 4:15 PM

The Score in concert sounds wonderful! I like to listen to The Score on NPR.

It really was! How cool that you get it on NPR. I was wondering if anyone reading would know what it was, but figured I should include a brief explanation just in case. Edmund Stone is quite funny - he and our director are great at playing off one another. There was much laughing during our dress rehearsal with him. I'm hopeful that it was successful enough that we'll get to do it again at some point.