Easter, Ten, and Other Things


Mal's preschool takes spring pictures (as does Gareth's school, actually - I guess the photo companies weren't making enough off the fall pictures, so decided to try and get parents to buy pictures twice a year). I picked up Mal's to look through the other day and they just made me laugh. Here's one of the individual pictures: 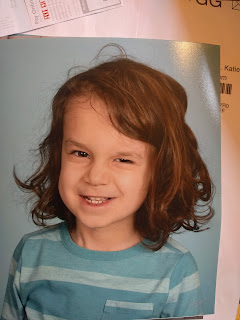 Gotta love the blueberry stained lips. And who knows what provoked that facial expression. In the class photo he's giving the photographer some serious side-eye and leaning away from his classmates. Looks like he was in quite the mood that day. Which may not be entirely surprising since they were taken the day he got back from being home sick for a week.

He got to spend the past week hanging out in Kindergarten since Gareth was on spring break and in the "school-age" room. Occasionally they'll let Mal go to Kindergarten anyway, but I guess with the extra school kids there they allowed him to more than usual. He came home with a sheet of the three letters he's willing to write. If only he'd be willing to figure out an L and a C, he'd be able to write his name. Not that he'd write them in the correct order. You'd think the M and A would be more difficult than L and C, but for some reason, these are the three letters he likes best. 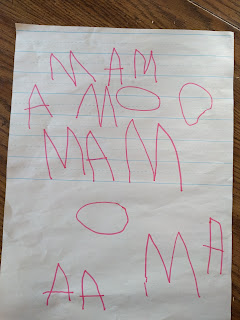 Gareth just turned 10. Most of his friends were out of town for his birthday celebration, but we had fun with the couple kids who were around. I fed them lunch and took them all to the movies (ugh, Boss Baby was the only kid show in theaters; you'd think they'd try harder to have decent shows out around typical Spring Break times, but apparently not) then came back home for cake. Gareth wanted the Minecraft cake again, so it was pretty easy to repeat what I'd done just a few weeks before, except with orange jello for lava instead of blue for water.

I keep forgetting to buy more birthday wrapping paper, so Gareth got some Christmas paper instead. 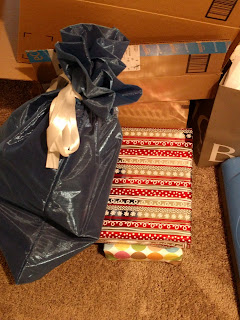 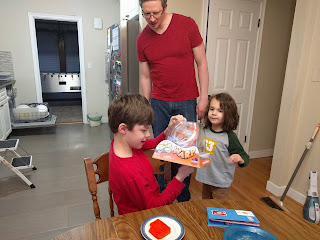 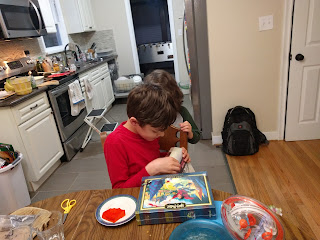 It was an exhausting day where I got not schoolwork done, but he and his friends really enjoyed it. He got a sports camera from my mom, which he's been having fun with over the past few days, taking video of running around the yard and making a dialogue with himself as two different characters.

Easter weekend was some of the best weather we've had yet this spring. I discovered that I can sit in the yard and still have access to internet, so did so in order to encourage the kids to play outside. Mal prefers to sit next to me rather than play. At some point he did get up and manage to twist his ankle a bit, which he's showing off here: 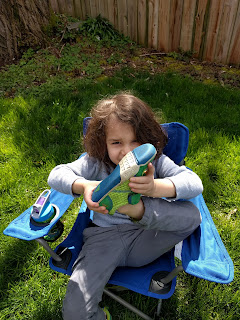 Clearly a severe injury. And here's Gareth finishing up a lap around the yard with his camera attached to his waistband: 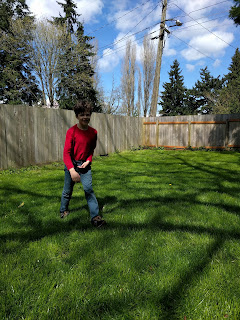 Mal trying to sleep in his chair. 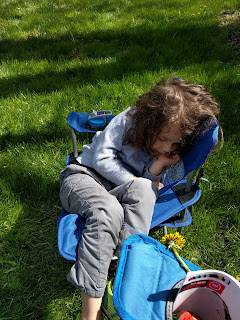 Mal offered to do my work for me: 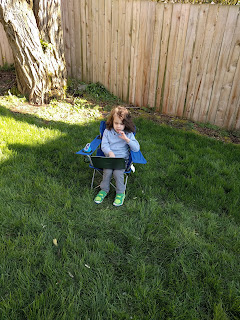 Eventually Mal tired of me doing work and insisted we go for a walk. We headed down to the school playground where he finally decided he could be a little active. He's still too scared to try monkey bars, but he was more brave than usual about the slides and willingly went down the big slide several times.

We didn't do much for Easter. I knew we'd have had tons of sweets recently, so I picked up a couple non-food items for each of them and then put an apple, a package of blueberries, and a pez dispenser in each of their baskets. They didn't even notice their baskets when they first came into the living room and were just sitting on the couch playing with toys. Gareth finally saw them. "Oh, yeah! It's Easter; look Malcolm! (Mal gives a confused look toward the baskets) Can we open our Easter stuff, Mom?" 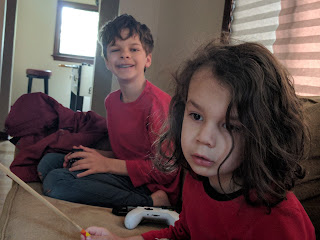 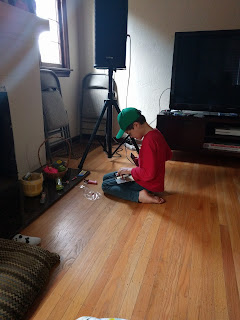 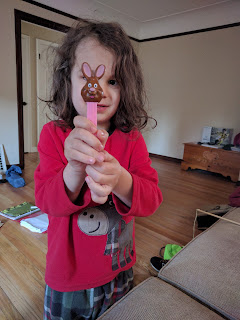 Mal opened his stuff but didn't want to eat anything. He got sick a few minutes later, then ate all of his blueberries (which did stay down) before deciding he was done eating for the day. So Easter was rather low-key at our house. He rallied to do a very quick egg hunt later (I need to find better hiding spots), but hasn't really touched the candy from the eggs - most unusual for him. He took a couple of good naps during the day, so hopefully he'll be feeling his usual self soon. 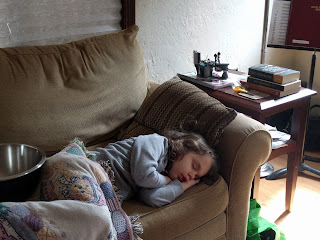 What a wacky picture of Malcolm! I had to laugh. I had one of my boys pull a funny face once, but it was in the fall pictures (we did a retake) and the yearbook people did not get the retake photo, so his funny face was in the yearbook. Funny and a little sad at the same time.