The cherry trees are in bloom at UW. Because our program is housed in a building on the quad (Raitt Hall), we get to take in the beauty somewhat regularly (all of our classes are actually elsewhere, but we often head up to Raitt for meetings or to study). My pictures certainly aren't the greatest, and the quad was more crowded than usual with people coming to check out the blossoms, but here's what I snagged on my phone while walking to Raitt last week: 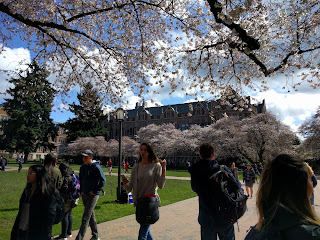 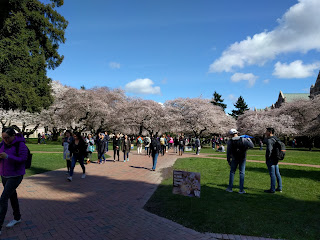 We're starting to get more spring-like weather, as you can see in the pictures above. I made time to go on a bike ride at the end of last week. We headed up to Iron Horse State Park and rode a portion of the John Wayne Pioneer Trail. It's a packed gravel trail that is an old railroad bed. You can ride it all the way to Idaho - apparently many people who ride cross country use the trail for that portion of the ride. We were hoping to make it 18 miles in, to a tunnel that doesn't open until May 1. We made it almost 11 miles before the snow we were hitting more and more frequently made us give up - we were getting to where we were walking more than riding. Riding through the snow was nerve-wracking, probably more so for Steve than for me since he was responsible for keeping the bike in control, which the snow really didn't want to allow. But it's a great ride - nice wide trail, lovely scenery, peaceful; we'll be heading back once the tunnel is open and the snow is gone. 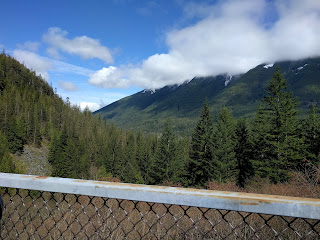 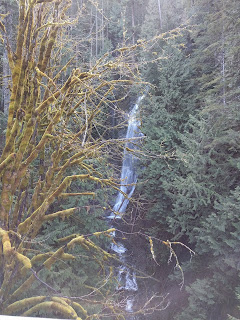