Mal came home from Jump Start eager to be an eagle for Halloween, all because their school mascot is an eagle and "Beaky" had shown up at some point during jump start and he thought having an eagle costume was the coolest thing ever. Gareth finally settled on Luke Skywalker, which I found an easy DIY tutorial for online. Ryan's brother has just moved to the area, and he came over Halloween evening to scare off youngsters with his Slenderman costume. He and Ryan enjoyed that while I headed out trick-or-treating with the kids. Gareth got to take charge of the pumpkin carving this year, and once Mal saw the cool face Gareth made on the big pumpkin, he wanted the same face on his little pumpkin. Pumpkin-carving happened and was all cleaned up before I got home from my concert the weekend before Halloween. 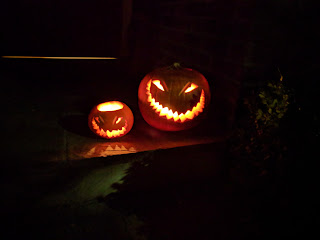 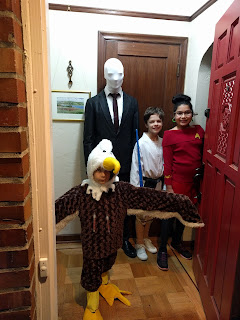 The weather was perfect, so the kids were happy to stay out for quite a while, and we got rid of almost all of the candy we purchased. It was fun seeing so many kids and families out on our street. Upon seeing Mal, kids or adults would occasionally break out in the school song, which just added to the entertainment of the evening.

It being a school-night and all, the kids didn't have much chance to revel in their loot when we were done. Gareth scarfed down as much candy as he could before we sent him to bed.

Not much else has been happening in our life. School is keeping me very busy. I'm hoping to be done with the core of my capstone project by the end of December so that I can focus on my write-up in January-August. Not sure if that's how it'll actually play out, but it'll be much more difficult to find time to do capstone stuff once I'm in rotations. I was able to get into the kitchen for the first time the other day and blend up my first recipe attempts, do a flow test, then bring them home so I could test them again after 24 hours: 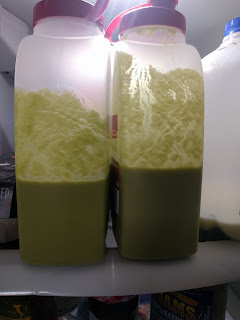 I was expecting these recipes to be a bigger failure than they were. Still some tweaking to be done, but I'm hopeful that I actually can produce a working recipe by the end of December. The kids thought they looked pretty tasty, but they really aren't intended to be tasted, since they're for tube-feeding, so I highly doubt their palatability.

I found out that I'll be at UWMC for my first rotation, which I'm pretty excited about. The other option was a hospital that's a trauma center, which would have been fine, but there are others in the cohort who are much more eager about trauma than I am, while UWMC will have more oncology and other areas that I'm interested in. And, in more awesome news, I just found out that I got accepted to do my concentration rotation at Children's! I'm really excited to spend spring quarter there, getting to work with the amazing RDs and expand my knowledge and experience in pediatric nutrition.
Posted by Erin at 8:13 PM

I would love it if you explained a bit more about what your program is actually about. You've mentioned nutrition and cooking experiments, but now you're talking about concocting things that people would be taking intravenously and clearly there is a LOT more to what you're studying than what I'd been envisioning! Please fill us in!