On Thursday I wrapped up my final course of my MS degree! It's a small milestone, because we still have internships and their assignments, plus theses/capstone to finish up, but a milestone nonetheless. I'm feeling excited, but also quite nervous, for internships. This last quarter was a fire hose of information and it feels impossible to remember it all. So, just the usual concerns of looking like an idiot and screwing everything up. But I'm trying not to worry too much about that right now and just enjoy my break/work on my capstone/get training done for my first rotation.

In other happenings, the boys are getting excited for Christmas. Gareth specifically asked to receive another ornament this year (I've been gifting them an ornament each year for the past few years), so it's nice to hear that he really enjoys and appreciates that tradition. He came to me the other day and said, "I've got a great idea! We should all get sweaters for Christmas! It would be fun!". I'm hoping he's not wanting an ugly sweater, because I absolutely refuse to do the ugly sweater thing. Also, who knew that holiday sweaters were such a thing? I was shocked to see that most places that have nice ones were sold out. Or if they had Gareth's size, they wouldn't have Mal's and vice versa. Anyway, it's fun to have him expressing enjoyment in the things that aren't just new toys.

I was at a friend's house the other day and they have a new nativity, which made me laugh: 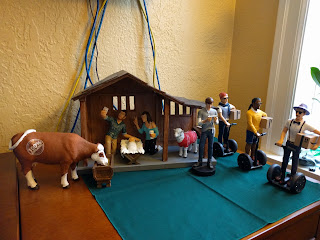 Mal was so happy when we hit December and started playing Christmas music. He and Gareth managed to have a Saturday where they got along fairly well. At some point they both got up on Gareth's bed and pretended to sleep, requesting that I take a picture so they could see what they looked like. 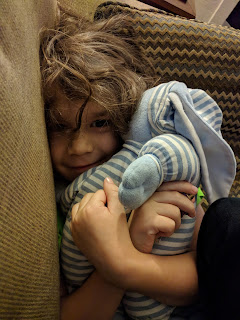 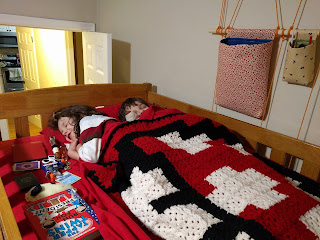 Not to let the previous year of illness be outdone, Mal developed a sore on his rear end just before Thanksgiving that wouldn't heal, despite my best efforts. We finally got to the doctor yesterday and turns out it's strep. I had no idea you could get strep down there (though it does make sense when you stop to think about it; I'd never heard of it before though). The pharmacist is, unfortunately, getting to know us quite well and remembered that we'd recently had the same antibiotic (for the first of his ear infections over the summer). I'm crossing my fingers that this is the worst of it this year. I only get three sick days between January and August (we get vacation during UW breaks, but those are set days, not time you can use whenever), so don't have time to deal with illness.

Mal's class has been having a gingerbread unit, where the Gingerbread Man has been their story for learning new sight words, they've done button counting for math, got to taste gingerbread and tally who liked it/didn't like it/wasn't sure, etc. He brought home a gingerbread decoration the other day, which also demonstrates his discovery of the question mark (apparently his entire class has been covering their work in question marks after learning about them; Mal is content to just use it after his name). 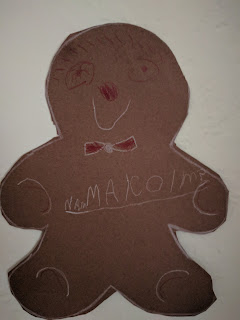 Congratulations on finishing your coursework! That is super exciting! :)

Hope everyone is feeling better soon. Strep is no fun...no matter WHERE it decides to present.

How wonderful to have finished your coursework! Go, you!