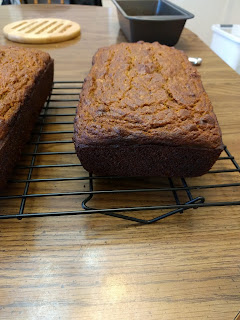 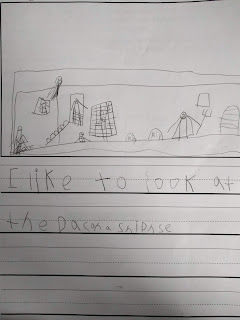 "I like to look at the dackorashionse". The drawing even includes their back gate and the rose trellis that one of the skeletons is hanging on. He's pretty upset with me that I won't buy large skeleton decorations for outside. I keep trying to tell him we have nowhere to store them when it's not October - he doesn't see what the big deal is when we clearly could just store them on the floor in the foosball room. Or next to the couch. Or in his closet (I promise you, the closet is way overcrowded already).
Posted by Erin at 9:02 PM

I kind of love the white crayon thing!!! (But I read that paragraph to Craig and he agreed that you're going to have an exciting time dealing with this in high school!)

I have such a hard time with Halloween decorations-- because I really don't care about Halloween enough to spend money on decorations for it (other than pumpkins to carve) but I don't want people to think that we're anti-Halloween or something because I'm definitely not that, either! So I feel that I need to somehow prove we're not the same as Jehovah's Witnesses. But if I'm going to spend my money on something like that, I'd rather have more Christmas decorations!

Don't even get me started on costumes (which are the WORST if you're not crafty and don't know how to sew!)...

I love that--Ryan's role of "Patient Listener while Erin vents!" What a great role. Glad you have a Ryan to play that role!