I headed back to work a couple days after Christmas (helping cover the NICU, so it's been an enjoyable week), but I did have New Year's Day off. On the 30th I started our puzzle, just getting some work done on the edge. Ryan completed the edge during the day on New Year's Eve. By the end of the night I'd completed the following (Ryan did the couple of trees in the middle left and right of the puzzle): 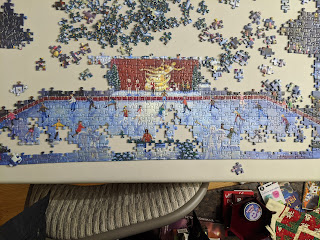 We also enjoyed a nice spread of treats, cheeses, etc. Daniel and Emily joined us for dinner, but dinner happened a bit late so they had to leave before we made it to the cheeses. Mal stayed up until about 9:30 or 10, the rest of us stayed up much later. 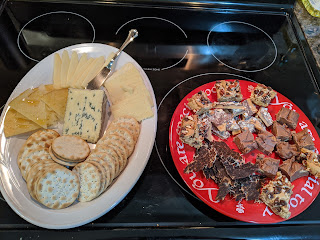 The boys received a cookbook from my sister for Christmas and Mal was eager to start trying recipes on New Year's Day. First up? Pancakes. I struggle with letting go of control/knowing everything will be a mess when they're helping in the kitchen, but I also really really want to encourage them to feel confident and comfortable with cooking/in the kitchen. So lots of deep breathing in store while they learn, but it'll be worth it. And Mal is really quite good at flipping pancakes we discovered. 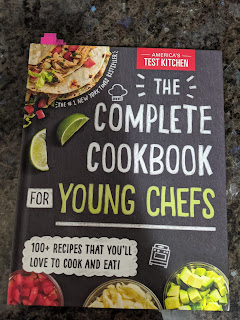 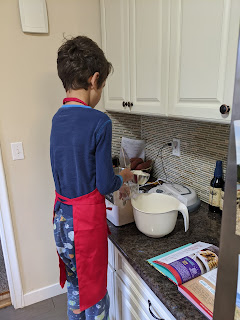 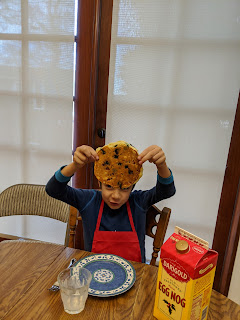 I spent the rest of the day focused on the puzzle. By the end of the night I was further along than this picture shows, with just some small sections left in the upper left and right. I was the only one who had put significant work in on the puzzle at this point, so was actually a little worried that everyone would finish it while I was at work the next day. 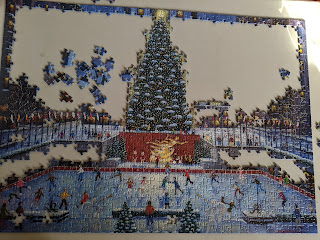 Sure enough, they did. I was definitely a little sad about that. But it's a beautiful puzzle and was lots of fun to make. 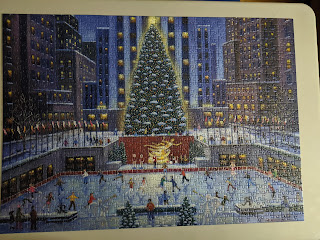 Mal requested he make chili that night, and danced some while stirring the vegetables in the pot. 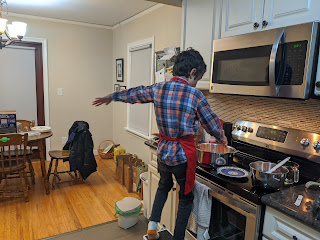 This morning he insisted on "baked breakfast", so we made the blueberry muffin recipe. He has lots of other recipes marked in the book, so we'll have to get all the ingredients and work on those through the coming weeks. He did much better with cracking eggs this morning than he did with the pancakes, so he's definitely improving and learning. I'm loving how much he's enjoying it.
Posted by Erin at 5:24 PM

Have you ever tried wasgij puzzles?--they are kind of awesome for people who love puzzles. My husband enjoys them so much! The picture on the box isn't the picture the puzzle will make--like, it might be what happened a few seconds later. Or a few decades later. Or it is what one of the character sees. Kind of fun! Your puzzle looks great!

I love reading your posts. I have the picture of Malcolm, the dancing chef, as my wallpaper on my phone right now. I really can relate to the deep breaths (and bitten tongue) when it comes to letting the kids cook. You'll never regret it, though.

I started a 1500-piece puzzle on Monday, Dec. 30. It's still not done, but I still love doing it in the snatches of time I get.