Well, had a nice roll of fairly consistent posting there until September hit. September meant the start of school and ramping up preparations for an organizational go-live at work (we changed our electronic health record, a process that's been in the works for over 2 years). I was a superuser for that, which meant I had to assist others in our department before, during, and after go-live. Basically, worked many 10-12 hour days, 6 days a week for the past few weeks. But got to be on-site again, which I've missed so much! I've also moved into the ketogenic/biochemical genetics cohort at least through the end of the year, which means at the same time as go-live I was also training in keto (ugh, no you shouldn't do keto to lose weight, it is only evidence-based for intractable epilepsy and is actually quite dangerous if not monitored carefully). It's been stressful, but I'm really enjoying being in a stable place.

Our weekend baking has dropped off considerably with all this. But I did make up some mini donuts one day! And had serious issues making the glaze. Not really sure why. The chocolate chips I had on hand were Nestle; not sure if they changed something in their formulation recently, but every time I tried to melt them they just became a semi-melted, semi-solid gloopy separated mess! Never had that happen before. I finally just pulled out some baking chocolate squares and that worked immediately. So bizarre, but enough of an issue that I'll likely stick to Ghirardelli chocolate chips in future. Had recently had those and melted them without issue. Donuts were oven-baked and just from a KAB mix and were delicious. It's tempting to get a couple regular-size donut pans, but we don't really have room for them so we won't. 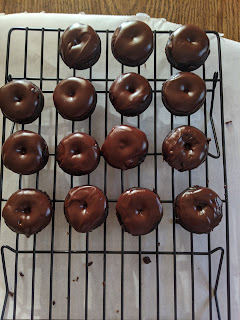 Ryan splurged and purchased a new microphone for himself. He's been wanting this one for a long while and has been very excited for how much better his sound quality is on his meetings and calls now. I'm gradually realizing we need a bigger house for his audio hobby as he acquires more microphones and various equipment. While I was in the middle of go-live, he was doing some job interviews (our poor kids those couple weeks!). He'll be starting a new job at the end of November, which should provide some good challenges and growth. 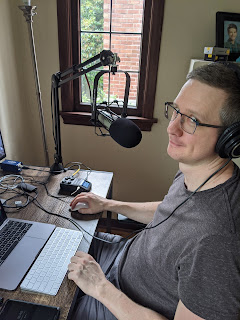 Anyone else's grocery stores start using these short bags?? I'm not sure if they're just using them for grocery pickup or what. With COVID, they stopped letting people re-use bags. Not sure what they're doing in-store now, but for the past few weeks we've just been getting these when we pick up groceries. I've been sending all our excess paper bags to the school for the lunch/food programs to use, so hopefully these ones will work just as well as the regular size ones! 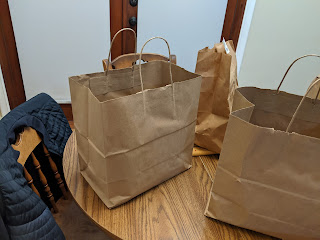 We finally got Ryan's album artwork back from the framer! They did such a nice job - worth the 8 month wait. Now we just need to decide where to hang them all. Hopefully before tomorrow because house cleaners are coming tomorrow so would be nice not to have these hanging out on the floor still. 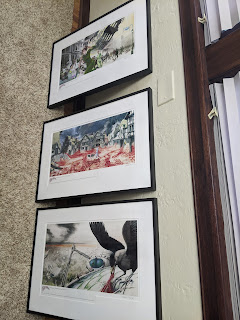 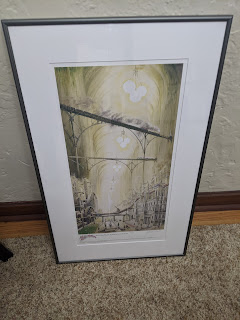 We voted! I love our vote by mail system here. No waiting in lines or having to rush to a polling station during lunch or after work. And that I can track my ballot as well as see my voting history online. If vote by mail isn't the default in your state, I highly recommend you work toward it. (Assuming this isn't the last election we have. *nervous laugh*) I think it took several years to implement here, but was in place by the time we arrived. Voting here is so much easier and I'm way more informed about the issues and candidates that I'm voting for than anywhere else I've ever lived (some places don't send out any voter information at all, so finding out who candidates are can be really difficult). Basically, WA voting makes all other states I've voted in look super regressive. Lest you think WA is too perfect, we have one of the most regressive tax systems and likely an impossible battle to move toward anything more progressive on that front, sadly.

And we tried some new teas! We needed to replenish our MarketSpice (cinnamon orange) tea anyway, so also grabbed some Princess Grey while I was at it. Got a very small amount of their Egg Nog as well. Ryan was not a fan of the egg nog tea; I didn't mind it, but definitely not one I'll sit and drink a lot of. Princess Grey, on the other hand, is delicious. I enjoy Earl Grey typically and also enjoy a good London Fog now and then (if I get it at Starbucks I request they use waaay less sweetener than they typically put in - they make both their chai latte and their London Fog super syrupy and cloying - yuck). This has some of those London Fog flavors (lavender), but without the sweetener. I think we're rapidly approaching the need to clear out and dedicate a whole cupboard shelf to our tea supply.
And that brings us up to the present. We're spending the weekend watching some Halloween movies (Beetlejuice, Ghostbusters, Evil Dead - only with Gareth on that one!). I'm on furlough this week, so planning some fun Halloween activities to do with the kids since we won't be trick-or-treating.
Posted by Erin at 1:04 PM

My sister voted absentee in Washington several years ago and was notified that her ballot was rejected because they didn't think her signature matched her own signature. Ever since then, I've been very skeptical of mail in ballots. I also really love going to the polls and the sense of camaraderie you find there with everyone there to vote! In the past, I've usually brought my kids along so they can witness me exercising my civic duty, which I loved. (Obviously, I won't be doing that this year, though...)

Don't worry too much about this being our last election-- if Trump actually wanted to seize power, he could have used Covid as an excuse to cancel or postpone the election.

I can't wait for this election to be over. I sure hope we have a clear winner right away.

Congrats to Ryan on the new job!!! Isn't it wild how exciting life still is after getting married and having children and "settling down"??? I kind of thought it would just be boring at this stage in life and it never is!

There have been a couple people in our neighborhood who had the signature issue this year, but apparently it's a super quick thing to resolve. They reported they were in and out of the elections office in less than 15 minutes, ballot counted. Not sure how you resolve it if you're not in state, but I do feel like WA state has very thoroughly thought all this out, so I'm sure they have a way. It's driven me crazy that Trump has tried to undermine confidence in vote by mail since it's not like we don't have states that successfully do this and do it well. All places had to do was reach out to those secretaries of state for advice and lessons learned. I think it's unlikely we'll have a clear winner right away - this is the cost of vote by mail, it takes a few days before you can tally all the ballots. I'm okay with that cost, but I think lots of people aren't used to that and it could be used to sow uncertainty and chaos.

But back to people freaking out about vote by mail a few months back being confusing when our state successfully does this all the time - this is something that boggles my mind about a lot of things in this country. We act like no one has ever tried universal healthcare before and *gasp* how could that possibly work??!! When we have a multitude of other countries doing exactly that with a variety of systems that we could objectively study and learn from. Same with different voting systems (ranked choice and so on). It confuses me so much.