I have to take two weeks of furlough over the next few months and was able to get this week as my first one - which, after the past few weeks, turned out to be even better timing than I had anticipated.

Day 1: House cleaners came, so we hung out outside for a couple hours. Unfortunately, it was quite cold here earlier this week, so this wasn't so pleasant. Once the kids hit a school break, I placed our bagel order and had everyone get in the car while I picked up the bagels. Then we decided we should keep ourselves warm a bit longer by driving by Daniel and Emily's house. Ryan was the only one who had seen it up close before, so that was a good excuse to drive by.

But the big afternoon activity was the exciting one - I hung up the artwork! Huge thanks to my mom and sister for their long-distance assistance in thinking through where and how to hang these. Ryan and I had thought about spreading them out through various rooms and I was a bit worried about having them all in the living room (would it make the whole room feel like it has a "theme"?). Partly because we have so many walls and so little to go on them. And even when thinking about the living room I was thinking they'd have to be spread all throughout the room. Then realized they work so much better all together here, which prevents the room from feeling like is themed around this one thing, but also tells the story so much better than they would spread all over. Having some art on those walls also helps this little corner feel less disjointed from the rest of the room. This is why I have my mom and sister help with this stuff - I'm terrible at visualizing things like this and they're not. 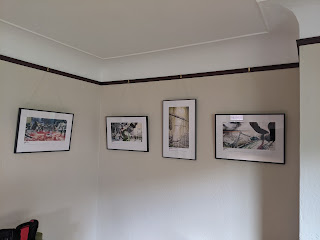 Day 2: Let the kids skip school. They were supposed to have their annual doctor visit, but their doctor was sick, so we just got flu shots instead. Mal amused us all by stating that the flu shot "felt kind of satisfying". After we got home from that, we played some Star Dew Valley together and baked a spider bundt cake. We definitely had some slight stickage issues with the cake (I think our pan must've been a larger size than called for, but dumb pans don't list their size on them so I had no easy way of telling; looks like a typical size bundt pan to me, but maybe not). Once we got the cake out and cooled, the decoration was super easy. 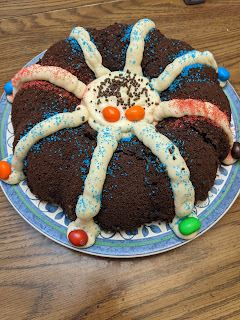 Day 3: More chill. I'm gradually getting old childhood silver fillings replaced as my dentist determines they're needed, so spent an hour on that this morning. Spent the rest of the morning comparing healthcare plans for open enrollment (so fun) and then will take Ryan downtown later to collect his belongings from his old office before his last day next week.
Posted by Erin at 2:16 PM