Ryan and I have been wanting a new couch for a while, as the one we got before Mal was born was slowly succumbing to the years and to the kids use of it as a jungle gym (despite our best efforts to get them to NOT use it as such). And we wanted better lighting in our living room. And more seating. And to figure out how to use the weird little nook area while still maintaining the walkway from the entry to the hallway. Every time we looked at anything we just became paralyzed by indecision. How to find a sofa that actually works for Ryan's lanky legs but is also firm (we both dislike super soft sofas)? How to know that it actually is good quality (our current one hadn't lasted nearly as long as we'd hoped)? How will this one piece or that define the style of the room and how on earth do we make everything look cohesive?? Just too daunting.

I was planning to enlist the help of an interior designer for ideas, but then Covid happened and I hadn't quite brought myself to pull the trigger yet, so obviously that was put on hold. But then my lovely sister-in-law, Emily, asked if we would let her design a room for us. She likes doing this sort of thing, so we jumped on the chance, because why not?

With some input from us, she gradually started to acquire items for the room. A few weeks ago we painted the walls in a warm white. And then a couple weeks ago we got word that the sofa was ready to deliver, so last week we spent a few days putting it all together.

We didn't think to get before pictures, but this one (minus the mess of boxes we were getting rid of here), sums it up. Couch (tv across from the couch), side table next to the couch, chest in the nook, and there's one pathetic lamp that doesn't have a lampshade to the right of the couch. 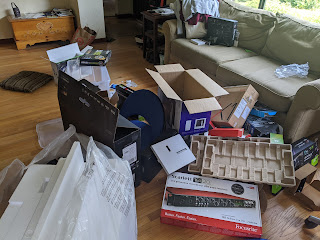 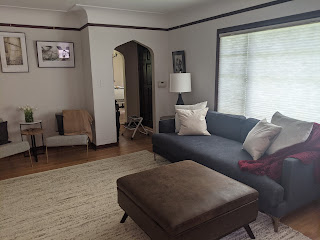 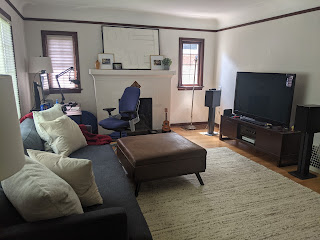 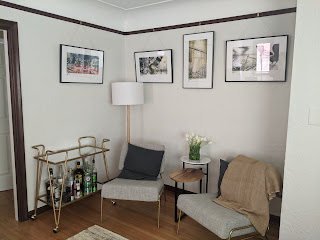 We have no choice but to leave Ryan's desk there in the corner for now, but eventually he'll go back to in-person work and that can go away. We're actually contemplating making the current foosball room into an office for the one day or so a week that he might want to work from home - but outlets will need to be added first and the foosball table would need to relocate to the basement, which means we'd likely prefer to get some other work done in the basement first as well. And, of course, the kids will need to be back at in-person school to avoid constant interruptions from people walking into the kitchen for stuff, since that space is right off the kitchen and entryway.
But enough about the future office plans. We're so in love with the new living room space! We opted to leave the ceiling the bright white it already was; I wasn't positive about it at first, but over the past few weeks have decided I adore the slight color contrast there, highlighted by the brown picture rail/molding. I always want to put my feet up in the evening, so the ottoman is largely mine so Ryan/the kids don't have to put up with my legs across them as they sit on the couch anymore. And the nook area feels perfectly part of the room now, while also still leaving plenty of space for the "walkway" between the entry and the back hallway.
At the end of the day, Ryan and I have accepted that for things like this it is completely and totally worth it for us to let someone else make most of the decisions. The kids are so happy to have more light in the room at night and it quickly became apparent they'd been somewhat embarrassed of our bare-bones living room before and are now excited to have friends over. Malcolm declared that the room was looking like a mansion. And that now it's nice enough that we can host parties, just like Mr. Redpath does. Emily did an amazing job, so we've already enlisted her to help with the dining room, which we're hoping to get finished by early July when some of Ryan's family will be in town.
Posted by Erin at 6:24 PM

That looks GORGEOUS!!! I never could have put something so lovely together! I'm so glad you found someone who could help and do such a great job! Isn't it fun having a whole new room??? I love it! -Alanna