Met up with some coworkers a few weeks ago and were treated to a lovely double rainbow - the picture doesn't really do justice to just how bright this rainbow got. One coworker has a 4 year old and he was over the moon about the rainbow after starting out a little grumpy. 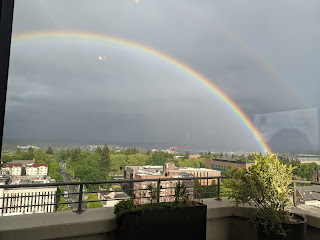 This gathering was with newish coworkers (newish to me because I'm only now officially becoming a part of their team) and some soon-to-be former coworkers (RDs who are leaving). I'll officially become a metabolic dietitian at the end of this month, which is both exciting and nerve-wracking. I'm happy for the folks that are leaving to be moving on to new adventures in their lives, things they've been working toward for a while. But it does mean I won't have more experienced metabolic RDs to lean on as I move into this area. I've been helping to cover some clinics and on-call for the past year, but will now get to be in the role full time (while still helping out in the epilepsy program a little). It can take years to feel fully competent in this area, so it definitely won't get boring anytime soon!

Metabolic RDs work with patients with inborn errors of metabolism - genetic changes that make it so they can't metabolize certain nutrients or metabolic byproducts. For many of these, nutrition interventions are among the primary ways to treat the disorder and help reduce damage done by buildup of toxic metabolites over time (by limiting the nutrients that lead to increased metabolite). There are over 40 disorders that we work with. Some of the most common that we see include fatty acid oxidation disorders, urea cycle disorders, glycogen storage disorders, and organic acidemias - each of these have more specific disorders within the categories and then there are more in addition to these as well. We typically follow patients into adulthood as these are rare disorders. For some of these disorders, it is only recently that people are surviving into adulthood, so that brings new challenges that in previous decades wouldn't have been considered - in how to help them navigate their disorder and going off to college, living independently, pregnancy, etc. Because metabolic crises require rapid responses in treatment, we take turns being on call 24/7. Our doctors try really hard to not page us in the middle of the night, but evening and weekend pages are not uncommon. It's a tight-knit multi-disciplinary team and I'm so excited that I get to join them.

We also recently celebrated Ryan's 40th, which of course called for getting 40 candles on the cake! 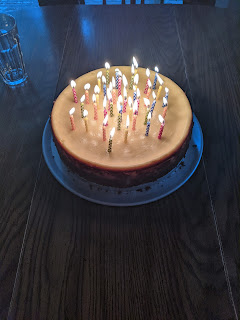 I stupidly lit the candles without checking to see if Ryan was actually ready for that, so they melted quite a bit while waiting. And the cheesecake hadn't had as much time to cool in the fridge as I would've like. And it was almost 80 degrees that day. So between all of those and the 40 candles sitting there melting, the center of the cheesecake was a little on the soft side when we served it. But still delicious! 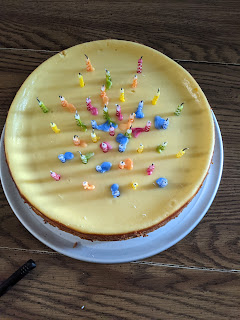 I've decided that the NY Cheesecake recipe is just easier somehow. 2/2 for no cracks on that one, 0/2 on the chocolate one. Despite mixing them both nice and slowly and following the baking instructions to a tee.

Rodents got to a wire in the car the weekend of Ryan's birthday, so when we went out to use the car it wouldn't start. Of course, we didn't know right away what was wrong. Didn't quite seem like a battery based on lights coming on and sounds we got when we tried to turn on the car, but everything we could find also said that maybe the battery wasn't dead but just didn't have enough charge. Some folks threw out thoughts of fuel pumps or whatever else. But when we finally got it towed into the repair shop they told us it was rodents chewing through a crankshaft position sensor wire. Pricey repair, so now we get to go through the insurance and just use a loaner car for the next while. But it also meant I wasn't able to get out to get Ryan's birthday gifts in time for his birthday. One (bike carrier to attach to the hitch) will have to wait until we get the car back. And we get to call a pest control company for the first time in our lives to try to deal with the rodent issue and hopefully prevent this from happening again. It's times like this that I really don't enjoy this whole adulting thing.

Your job sounds fascinating! And also like a lot of responsibility. Vey cool. HB #40 to Ryan!! And the rodent issue--not fun. Yikes.