Shortly after getting back from our vacation, some of Ryan's family began to arrive. Ryan's brother was in the Seattle area to wrap up his final year with American Band College, working on his master's degree. The kids and I hadn't had a chance to meet his wife or their toddler yet, so it was exciting to have them visit. I didn't end up taking many photos because we were so busy while they were here. The first couple days we took things easy as I was on call still and needed to stay where there was wifi. Ryan's parents and Karla went to Brent's graduation ceremony. We took the toddler and older kids to the local park and enjoyed lunch at the local coffee shop. On July 4th, we all went to Brent's final concert. It went pretty late and was near the airport, so we all stumbled into bed on getting back home.
The next day we took everyone to the Ballard Locks - sadly, the fish ladder viewing area is undergoing renovations. But given the holiday weekend there were plenty of boats to watch going through the Locks! We meandered the gardens for a bit before heading back to Daniel and Emily's place for a graduation/birthday celebration around the fire pit. Mal loves Emily and Daniel's cats so much, but equally loved his little cousin, so he was in heaven. He really, really wanted to hold his cousin, but kept trying to pick him up like a cat and just clearly has not spent time around little kids. Also, an almost 2 year old generally isn't going to want to be picked up by a kid who clearly doesn't know what they're doing! At this firepit, Mal settled for sharing a chair and putting an arm around him while watching Cocomelon. 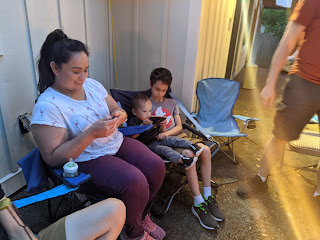 My birthday gift to myself was to go on a bike ride with Steve on the Iron Horse Trail. Emily decided to join us and it was so fun to have her along! Some family members decided to meet us up at the top of the trail (Hyak) to check out the Snoqualmie Tunnel. They went to Snoqualmie Falls first, since that really is a must-see. Mal was not impressed by the gift shop at the falls, but he and Gareth thought the tunnel was pretty cool. Gareth wants to go back and ride the tunnel, so we really will have to get a bike rack for the car soon. And more bike lights. I took pictures, but they never do justice to the great views along the ride. 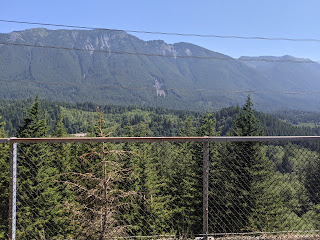 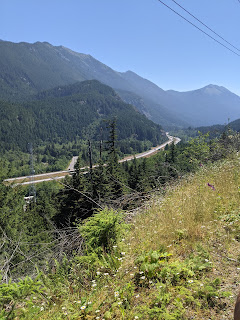 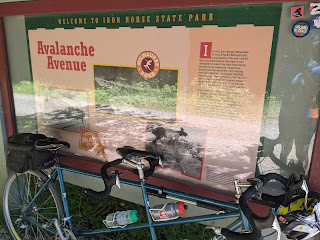 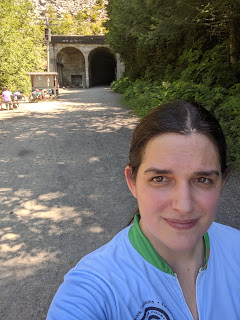 It's a steady 1-3% grade the 20 miles up to the tunnel, which you don't really notice on the way up. You really notice it on the way down though when you're riding the brakes the whole way, your hands start to cramp (well, in my case, Steve's hands since he's got the brakes!), and every bit of gravel feels way bumpier when you're hitting it at 20 mph rather than 10!
Emily and I were both pretty exhausted from the ride, but it was Ryan's parents' last night in town. We asked them to watch our nephew so the three couples could go out to dinner. Tried out Capitol Cider for the first time and it lived up to its reputation. We had a great time getting to know each other better.
The next day, Emily and I took Karla and Brent downtown to visit the gum wall and Pike Place - we ate some delicious hom bao and falafel at the market. Then headed over to Harborview to show Karla the hospital that Grey's Anatomy is based on, did a drive by viewing of the Space Needle (way too overpriced to actually go in!), then headed up to Queen Anne to check out the Meredith Grey house and the view from Kerry Park. I'd never spent time up there before and, man, serious house envy. Glad I don't live in that neighborhood all the time, because there are so many beautiful houses that you just know cost millions of dollars and that most of those people just totally lucked into by getting in when things were cheap. (Fellow clarinetist has told me about how when things were in a bust in the 80s, Seattle Symphony musicians were snatching up houses in all those sorts of areas; things they never could've dreamt of previously; none of us relative young 'uns were so lucky with the timing of our house purchasing.)
The next day we took a ferry ride in the afternoon over to Bainbridge. Wandered the charming main street of Winslow, ate some dinner, got some ice cream and headed back home. One of these days I'll actually drive onto the ferry so I can get over to the Bloedel Reserve!
We were sad to see Brent and Karla go, but it was time for us all to get back to our usual routines. I had to work on Friday, so it was really strange to be off for most of the week, work a day, and then hit the weekend. I'd harvested the scapes from our garlic just after our June trip. Also managed to snag some through our farm box and I needed to use them. Found a recipe for grilled scapes with grilled potatoes and sausage. It was delicious and definitely a keeper for the one time a year you can get scapes. If I can get more next year I might also make some butter with chopped up scapes to create a nice garlic butter. 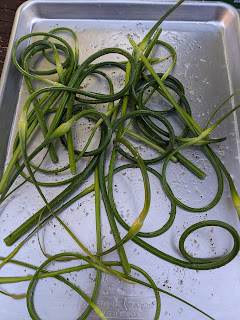 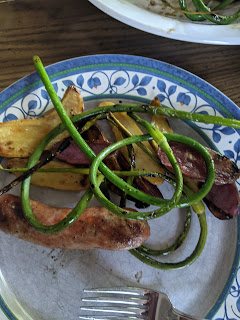 To keep up with our busy pace, instead of putting together the kids' new dresser like I need to, we met up with Daniel and Emily for a hike up Little Si. Gareth had a sleepover with a friend in Olympia the night before and hadn't got much sleep, so he skipped this hike in favor of sleeping in. 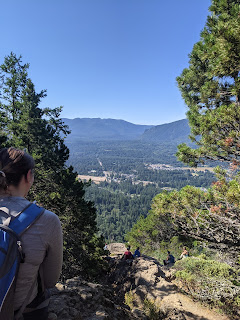 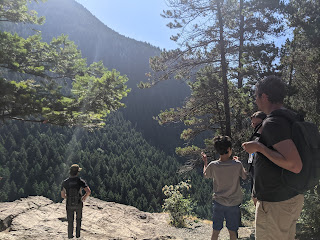 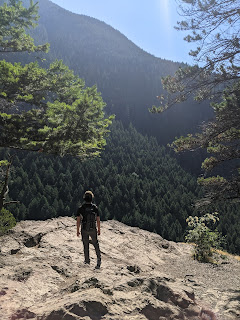 So pretty! Again, hard to capture the beauty in pictures (at least it is for me). There were a bunch of ants at the top and as we sat to take in the vista and eat a snack, Mal commented on how cute they were - I love how much he loves and appreciates life/nature. He peppered Emily with questions about nature throughout the hike. This hike, at just over 4 miles round trip and about 1100 feet of climbing is definitely my limit for now. I've got some annoying knee thing going on and walking downhill makes it worse. I made it, but the shooting pain from my knee down my leg by the end was not great. Ibuprofen immediately afterward was helpful, but I'm still feeling it today. I have some PT lined up to see if that helps, because this is the same pain that put a halt to my jogging efforts last spring/summer and that has been cropping up for years if I ever try to do any long amount of walking even at a leisurely pace (like showing Ryan's sister UW campus last summer). At this point, it is interfering with my ability to do activities that I want to do so I finally decided to try to do something about it.

Then we all met up with Steve again (and his family) so he could show Emily how to make rhubarb pie and we all enjoyed some dinner together. He even made Mal some octopus hot dogs. It's been so wonderful to start seeing friends again! Mal was jealous of Emily's camelbak on the hike, so he spent a chunk of today looking up hiking gear (he also wants a walking stick or trekking poles?). Unfortunately, most of those things cost more than the money he has. I'm trying to convince him to just wait for Christmas (since I was already planning on getting them some outdoor gear so I don't have to schlep everything for them), but he wants something now. At least he's excited about hiking!
Posted by Erin at 10:23 PM

It was so wonderful to visit you and your family! Thank you for all you did to make sure we had some good experiences while we were there. I hope your physical therapy works for your knee. Glad it hasn't stopped you from being able to bike ride.

It was so fun to watch how attentive Malcolm was to Matteo (as well as the kitties). While I was watching Matteo (date night), Malcolm would act silly (fall on the air mattress bed) and Matteo would laugh so hard! It was hilarious and I loved it!

Oh, man, I just missed you! I was on Bainbridge from July 5-8! I should have checked in (but it seems like we were both very busy)!

Happy happy birthday and I'm glad you're having a great summer!

(And take care of that knee-- I'm so sorry it's giving you grief!)