We took our first ever family vacation (in the kids' memories) this past week. Decided to start small and just headed down to the Portland/Vancouver area. Seemed like that should be a doable drive without too much "are we there yet?" complaining from the back seat! I was considering Whidbey, but the only accommodations I could find at the kinda last minute date we were planning made it seem like all lodgings on the island are not welcoming to kids. So going somewhere we could just get a regular hotel sounded pretty great.

The mountain was out as we headed out of Seattle! 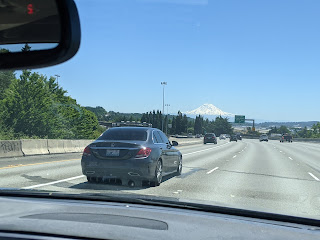 The drive quickly became tedious. We expected a little traffic around downtown Seattle, but there continued to be slowdowns throughout the trip, in random places. Despite being a mid-week, mid-day drive, it took us about 4 hours to reach the town just outside of Vancouver where one of Ryan's college roommates now lives. Malcolm said their house was like a mansion - which compared to our little city house it is! The kids enjoyed playing in their yard with their kids and on the trampoline. And we had fun catching up with the adults.

Then it was off to our hotel in Vancouver. Our room had a little patio, which was rather fun. It looked out over Esther Short Park. 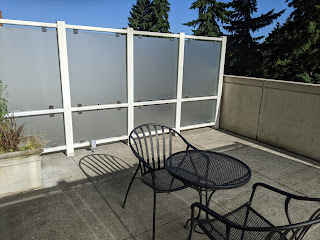 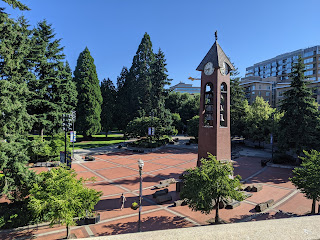 The weather was forecast to be unseasonably warm, so we opted to spend our first day hiking, before the temps hit the high 90s. The whole Columbia River Gorge area is beautiful. I'd considered having us drive to Mt. Hood as well, but in the end I opted to keep that for another trip as it was another couple hours away from our hotel and there was plenty to keep us entertained closer to our hotel.
We headed to Beacon Rock State Park and were pleasantly surprised by the lack of crowds on the "heavily trafficked" hike we chose. Always a good feeling with the hiking app rates the hike as "easy" and your out of shape body quickly starts complaining. Spending some good time hiking was exactly what we all needed after the past year and stressful past few weeks. 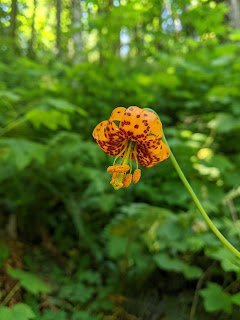 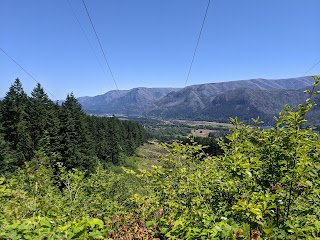 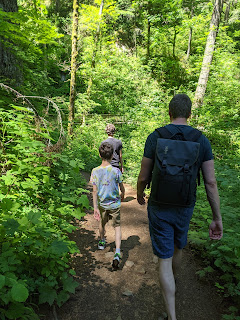 At the Pool of the Winds, a butterfly landed on my finger twice - and seemed super content to hang out there for a long while. This was an out and back trail of ~3 miles round trip. There was a playground near the parking lot, so the kids played there for a bit before we headed back to the hotel for dinner.
The next day we headed into Portland to visit the Portland Japanese Garden. Parking was a pain, but the garden was beautiful. This one is perhaps a little more "manicured" than Kubota Garden, but I think the kids and I do prefer how many more paths there are to explore at Kubota. This garden definitely leads you along a more set route. They have a pavilion with several bonsai trees that were really cool to look at, with several of them hundreds of years old! Because the garden is part of a larger park and that park is on a hill, as you get to the top of the garden there is a really nice viewpoint from which you can see downtown Portland and Mt. Hood in the distance. 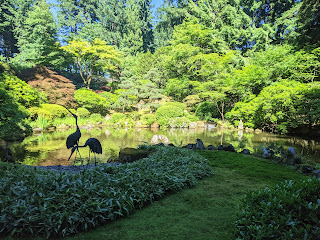 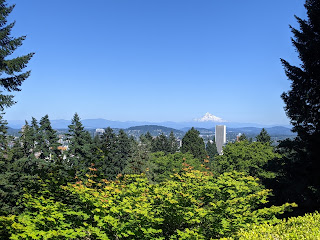 That evening we walked along the Vancouver waterfront to enjoy the views of the Columbia river. The next day it was starting to warm up. We used it mostly as a day to just chill a bit - checked out the Vancouver Farmer's Market in the early afternoon and bought lots of fresh fruit and then reserved a time to use the hotel pool. We definitely did not mind the having the pool all to ourselves due to their current Covid precautions! And for dinner we introduced the kids to sushi. Mal was really willing to try things, which I was impressed by, even if he didn't like a whole lot - except for the shrimp tempura, which he loved (and the dessert of sesame balls). Gareth enjoyed it all.
For our final day, we planned another Portland day. We started with a mid-day jetboat tour of the Willamette River that starts in Portland and talks about the bridges and areas along the river and then ends at the Willamette Falls before heading back down the river to Portland. I didn't take any pictures of the falls, but I'm sure there are better ones than I could take to be found on the internet. Lots of getting splashed with water during the ride - we were thoroughly drenched by the end - which was much appreciated on such a hot day. Ryan and I ended up with sunburns despite our best efforts with sunscreen. The kids fared better, I'm guessing because their skin is generally more used to the sun/outdoors.
The jetboat dock is right near OMSI, so we spent some time there after our excursion. It was a little awkward to wander around while semi-wet still, but it worked. We saw their dinosaur exhibit, checked out the exhibit on pregnancy that has real fetuses (really cool to see), enjoyed the live snakes, geckos, cockroaches, etc. And then watched a movie about the oceans prior to heading back to Vancouver.
Our drive home was less tedious than the drive there. And our garlic scapes were ready to be harvested by the time we got back home! Now to decide what to use them for. 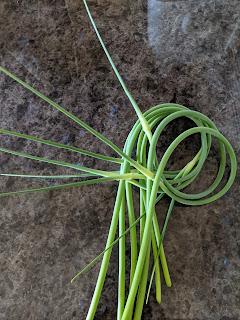 Sounds like a great vacation! I just learned about garlic scapes last week (when I am this many decades old!) and here you are, growing some!

Growing garlic is an experiment for us this year! My mom sent some cloves from her NJ garden for us to plant. So far they appear to be doing well, but we'll see what the bulbs are actually like.

We've been growing garlic the last couple of years too! Your scapes look really good.