We started on our puzzling just after Christmas this year since part of our holiday plan was to watch Lord of the Rings with M, who had not yet seen it. We also got snow the day after Christmas and then a couple days later, along with bitterly cold temperatures. We did our best to keep the sidewalk shoveled and clear.

It took a few days, but G, Ryan, and myself finished this puzzle during our LOTR marathon - we let M focus on watching the movie. M picked out our next puzzle to complete, a repeat from a few years ago, even though they weren't actually doing much puzzling themselves. 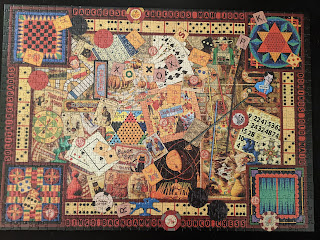 I ended up doing most of the second puzzle. Ryan did Mt. Rainier and some of the sky. G did one building and then got frustrated one night when he spent ages looking for a piece and I looked down and found it instantly. But I was also the only one working on the puzzle during the day as well, since they were all busy video gaming. 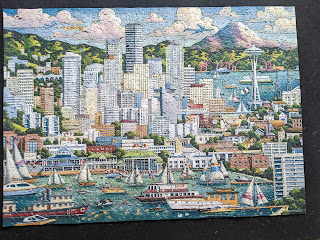 New Year's Eve we watched Casablanca with my sister's family. M wasn't very interested in it seeing as it's neither a comedy nor an action movie, but everyone else enjoyed it.

We used the opportunity to try out some new cocktails and use the coupe glasses Ryan's brother and sister-in-law got us for Christmas! We started with a brown derby - it has grapefruit juice in it, so seemed appropriate to make given we have Christmas grapefruit on hand. 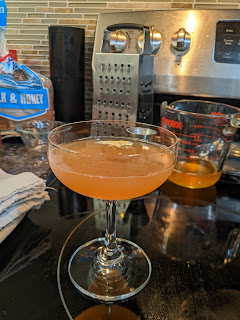 Then tried a Jasmine, which is more citrusy - and pink! 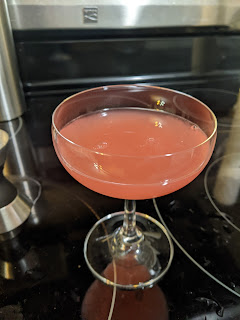 And then the atholl brose, for which you let some oats and water sit overnight to make an oatmeal "liquor", combine that with some scotch, half and half, and honey. It's kind of a dessert cocktail. 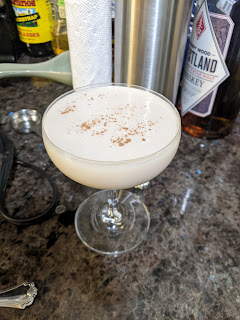 We were thinking of doing a French 75 as well - this drink is named after 75mm field guns used by the French during WWI - given that it's the only cocktail mentioned by name in Casablanca (despite the copious imbibing!), but we were done and decided not to make them.

We did make a gingerbread house this year, but I didn't love the batch of royal icing I made up. Took forever to dry and even when it did it was very powdery. Not sure if I just needed to beat it even more or if it's because I used meringue powder instead of egg whites this year. So it ended up with minimal decoration and I didn't manage to get a picture.

The kids got an extra day off because the district decided to offer covid testing clinics to students and staff before resuming school. I did drive the kids over to our local one, but parking was a nightmare, the line was already super long and outside (it was still so cold!), and given we hadn't been anywhere or around anyone outside of our house since Christmas day, it seemed very unlikely the kids would have been exposed, so in the end we didn't stay and get them tested. They've both had kids in their classes get covid in the last couple weeks, but have both stayed healthy. Ryan and G are now boosted and most of my clinic visits are back to telemed, so hopefully that will help us avoid omicron.