Things have been on the intensely busy side the past few months. I presented at a conference and my slides were due in February with the conference occurring at the end of March. That plus my usual workload meant for a stressful first few months of the year.

We've been trying to take advantage of weekends and light rail whenever we can to get out and explore. Back in February we went to Capitol Hill again, ventured to the U-District Farmer's Market (sans G, who was off skiing with friends), and met up with friends at the aquarium. We've never been to the aquarium before since it's pricey. It was fun to check it out, but especially now that the kids are older, not something I feel I need to do regularly. M really enjoyed the things he could touch and watching the otters - especially enjoyed the fact that an otter pooped in front of us. 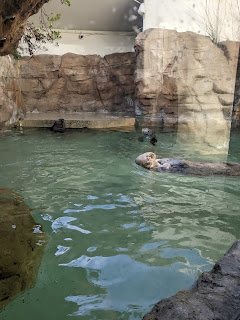 We had a few nights with absolutely stunning sunsets that month as well: 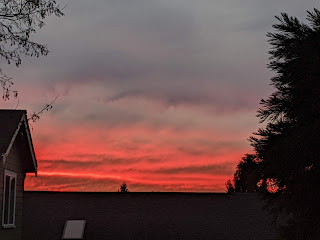 In early March we were able to head out on our first hike of the year - we stuck to a fairly simple trail near what was once a coal mine. G had pretty constant commitments elsewhere for several weeks, so also missed this trip. 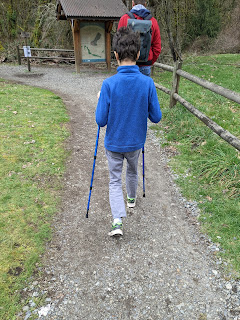 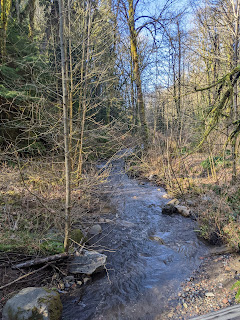 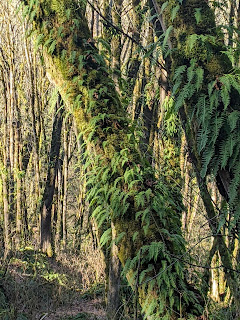 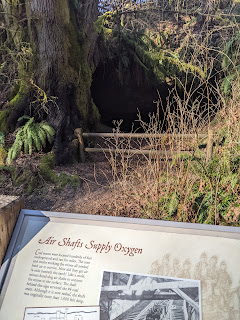 As we wrapped up the hike, M saw this sign and asked me "what does the pants symbol mean?". Took me a moment to figure out what he was talking about: 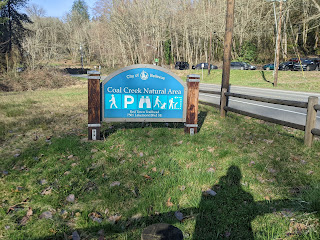 Sadly, I've been working every weekend for the past month and had to cancel some time off I'd planned on because our service was just too busy, so our outing opportunities have been limited. It's a whole thing with doing 24/7 on call, increasing acuity of our patients, and then also being expected to be part of weekend ICU coverage - we're going to be having some conversations with our manager about the absurdity of this (no other RDs take call and no one covers for us when we're out, so makes no sense that we're expected to cover weekend ICUs) and hopefully won't have to cover ICUs on the weekend.

I survived the conference presentation at the end of March and the next weekend I managed to pull off a small birthday party for M. Took a couple friends to the ice rink for skating - the public skate is usually pretty crowded but they had fun until their feet started to hurt from the rental skates. Then we headed home and they played video games before having donuts. It's the first time in a couple years that he's had friends over and it felt so much easier now than when they were 6 and 7.

At some point I managed to make his birthday cake but then it sat in the fridge for a week waiting for me to frost it. It was a rather spread out birthday, which M said he didn't mind, especially as he at least got dumplings and presents on his actual birthday. For his cake, he wanted a simple design from the show Naruto: 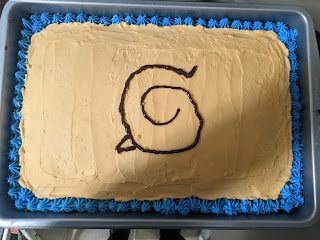 Here's hoping things calm down a bit in the next few months - I'm certainly much less stressed now that the conference is over!

I have two brothers-in-law who work in the medical field (an anesthesiologist and a podiatrist) and I am amazed at how awful scheduling always is for them. There has GOT to be a better way to do things!!! I hope you can speak with your manager and get things fixed!

Those hikes look great and I'm jealous of the sunset. Love the "pants" picture at the hike!