Last year while the kids were at camp we opted not to go anywhere aside from some day trips, because we'd just spent a bunch of money on our family vacation. We instantly regretted it upon arriving home, so made sure not to repeat that mistake this year.

Somehow, despite our decade plus in the PNW, we have never made it to the San Juan Islands or Whidbey Island. I had found what looked like a nice Airbnb on Whidbey the previous year and it was available for our dates still, so booked that - our first time ever using Airbnb. We dropped the kids off at camp successfully and and took the requisite picture of the beach at camp before heading toward Whidbey.

We took some time to stop at Deception Pass State Park along our way. Walked partway across the Deception Pass Bridge and took this picture while feeling terrified of both the long fall down in front of us and the highway traffic just inches away behind us: 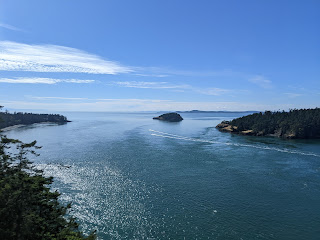 Then we walked down to the beach and just soaked in the beauty from what felt like a safer footing for a while. And took this picture from the path down, which felt like a much more secure vantage point. 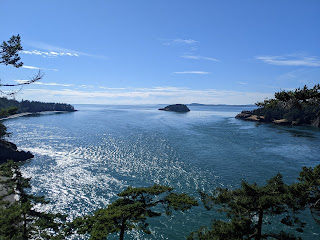 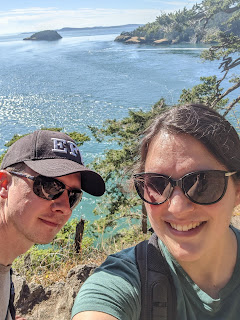 We could've done a lot more hiking in the park, but I had my clarinet with me (and I never leave my clarinet in the car unattended) and we needed to be getting on to our rental, which was on the southern side of the island.
As we drove up, Ryan was dubious because it looks so tiny. And, despite having looked at the pictures online and making the booking myself, I had a moment of doubt: 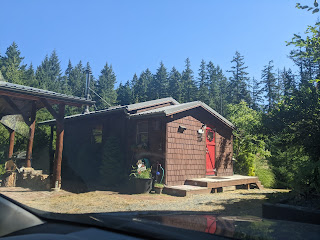 But no. The cottage extends back/below what you can see as you pull up and really was perfect. I'm not particularly into hunting/fishing lodge decor, but I get why they chose that. And all of the details that matter where comfortable and well-thought out with this place. The owner left breakfast items for the next morning and the cabin is the only place on the multi-acre property, so you feel really secluded even though you're not far from town. The kitchen allowed for plenty of cooking and the bed was comfortable.

Our first day we headed into town and meandered/window shopped a bit. Unfortunately, our timing being there Sunday-Wednesday was a little weird - clearly the town runs a little more on the weekend crowd. But we found a decent place for lunch and enjoyed a wine tasting before heading back to the cabin to relax and make dinner.
The next day we took it easy in the morning since I hadn't been feeling great the night before - watched some shows and I practiced a bit. Ryan had booked us a kayak rental for the afternoon. It had been ages since I'd kayaked, but the rental place was great about getting us set up. It was way more tiring on my arms than I remember from when I was a kid! But fun to see the water and shoreline that way. Some people wrapping up as we arrived were very excited about having seen a whale. Sounded like the whale had moved on, but I kept an eye out while we were out anyway. Partly because it would be cool to see but also because I really didn't want to accidentally get too close to a whale. Not only are you supposed to leave them lots of space, but a close whale encounter in a kayak seems like it would be mildly terrifying. We did not see any whales, or much wildlife at all, while we were out. But just as we were pulling back in, the woman helping us saw the whale at a beach not far from where we were coming in! She ran and got us all binoculars - it's out of season for whales, but this one grey whale has been coming close in to lots of the harbors this year, enjoying more of the ghost shrimp. It was really cool to see and I'm glad we enjoyed it from the shore.
We headed out to dinner at a local restaurant, Prima Bistro, which was excellent (and one of just a few restaurants open on a Tuesday evening). The next morning we enjoyed a leisurely breakfast before packing up and heading to the ferry to go back home. It was a thoroughly relaxing few days and we'll likely stay at the cabin again in the future - there are a lot more parks and little towns to explore on the island, but honestly the cabin is also a great place to hole up away from everyday life for a bit as well.
Posted by Erin at 9:56 PM

"Sounded like the whale had moved on, but I kept an eye out while we were out anyway. Partly because it would be cool to see but also because I really didn't want to accidentally get too close to a whale."

This sounds about exactly what I would think in that situation. Hahaha!

Glad you had a fun little getaway!

This looks amazing and I am so jealous!!!! (I totally would have been chasing after that whale, though, completely oblivious to safety issues! I'm so dumb like that!)

We were kayaking once and a seal popped up near my sister and she completely freaked out and was screaming at it to go away. I thought she was hilarious. (Perhaps she'd watched too much Arrested Development?)

Craig and I totally need to do something just like this...

This sounds so wonderful! I'm so glad you were able to take the time out and enjoy it. Dad and I stayed in a nice cabin, kind of like this, for one night a few years ago and it was absolutely marvelous.

Hope the boys enjoyed camp as well; I imagine it was nice to have an interesting break from home just before school begins.