Getting our Autumn updates in just before we switch to Winter!

The kids started back to school. G participated in cross country, though much of their season was disrupted by wildfire smoke - smoke season was delayed this year so instead of landing in the summer started in late August/early September and lasted into October/early November, aided by our unusually dry fall. Don't know about you, but I'm not loving the effects of climate change.

We finally managed to get M into swim lessons! We adore his teacher - she used to be a school teacher and has taught many different ages and special ed classes and immediately knew how to connect with him, cuts right through his avoidance techniques, and got him from terrified to enter the water to not wanting to get out of it in a matter of weeks. I wish she could be his teacher for everything.

I've been busy with orchestra leadership - I somehow* ended up being the president of the board this year and it's been a huge time commitment, more than expected, as we try to get back to a semi-normal state. I'm exhausted and it's having a negative impact on my mental health - I've felt depression creep in in a serious way for the first time since leaving Mormonism. I plan to step down from the board entirely after this season. The fact that there is an end date to it is the thing helping me make it through right now. That and Heartstopper, which brings me joy and so I re-watch episodes anytime life is feeling a little too much. Though I'm super nervous for the characters in upcoming seasons because obviously they're dealing with some serious things (bullying, hints at eating disorders, etc) that I'm worried will get worse and I just really want them all to be okay.

Work is busy as usual, but would feel manageable if I didn't have the orchestra stuff on top of it. RSV and influenza have kept the hospital full and made on call weeks extra busy. I presented at an online conference in September - the same topic I presented at the conference in March. My team has started buying stuffies from the gift shop semi-regularly as part of our coping strategy, so I have Ollie and Alonzo and Sam the Eagle at my desk. We give them different hats for the holidays. And Alonzo was joined by a new, yet-to-be-named friend a couple weeks ago. 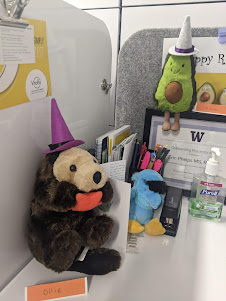 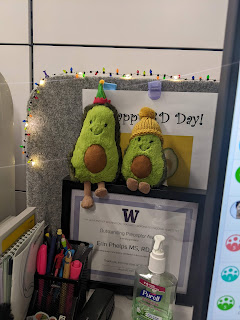 We made it to the pumpkin farm/corn maze again. Weather meant there weren't all that many people there when we arrived, which was delightful. M wasn't too interested in carving his pumpkin afterward - to be fair, October weekends were packed and I think we were all a little exhausted - so kept it simple. We did get him out trick-or-treating this year. And got way more kids at our door this year than last year and actually got rid of almost all the candy we got! 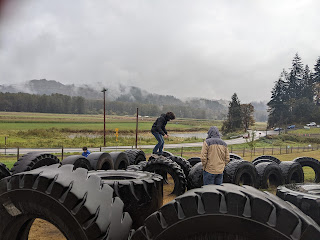 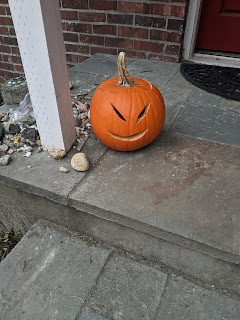 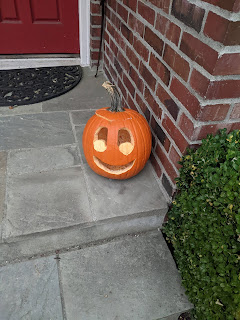 M was disappointed that I wouldn't let him get these for decorations this year. But we did, for the first time ever, get some outside decor for the holiday (aside form jack o lanterns). We put up some cobwebby stuff and he picked out some large spiders to go with that. It looked quite good until the wind got to it, but we were too busy to get pictures. 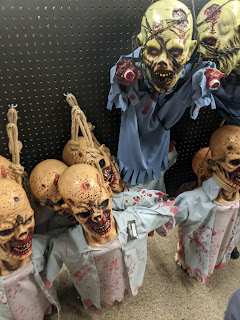 Adding to the just general overwhelmed-ness of the fall, there was a shooting at G's school in early November. It was targeted, but has left everyone with a lot to deal with emotionally and mentally. The shooting happened on a Tuesday and they closed the school for the rest of the week. The student who was shot died and two other young students were arrested. Just incredibly sad for all of those families. Thankfully I happened to check my phone and saw G's texts first - otherwise I would've first seen a bunch of texts from friends asking if things were okay. It's funny how everyone responds to things like this. I was between clinic patients and felt kind of frozen - they weren't releasing kids yet so it's not like me rushing off anywhere would be helpful, but it also felt weird to just keep going about my day. I went and saw the last patient and then went and packed up my stuff and left for the day. It was going to take so long for them to release the kids that Ryan ended up driving to the hospital to pick me up and bring me home. Then he stayed home to get some food and work while I went to wait for G to be released and got to talk with my mom on the phone while waiting. We had so many friends from all our communities reach out to us and support us in a variety of ways. A close friend called me and stayed on the phone while I waiting for Ryan and as all the emotions finally started to hit. Orchestra friends checked in by text, arranged a sub for me the next day, and ordered us dinner. Work friends stepped up to cover my call and offered resources. I really appreciated the reminder that we have built robust support structures for our family here. And my sister sent the most thoughtful care package, filled with items for comfort, warmth, confronting, processing, distraction, etc. The teachers eased the kids back into school the next week, but I know a lot of teachers, staff, students, and parents are still dealing with the fallout from such a traumatic event. 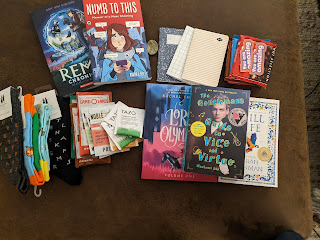 We got an earlier than usual snow. I appreciated that it turned into less of a storm than initially predicted, though we still had slick sidewalks for a few days. 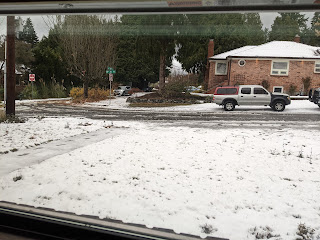 Ryan survived the initial layoffs at work. Of course they always say they hope there will only be the one round, but I don't trust that, so we're kind of assuming it's only a matter of time before he's laid off. That's definitely added some stress to work life for him as more pressure gets put on everyone who is left, but I'm so glad we're not solely reliant on his income. I would be much more stressed right now if I were a stay at home parent still. I feel really badly for those here on H1b visas who have been laid off - as usual, immigration rules are stupid and they have a very limited time in which to find new jobs which is very stressful.

Ryan and I went to a play for the first time since COVID! We saw Mr. Dickens and His Carol. While not my favorite play that I've ever seen, it's always fun to admire the acting, sets, costuming, etc. And just felt really good to be going out again. 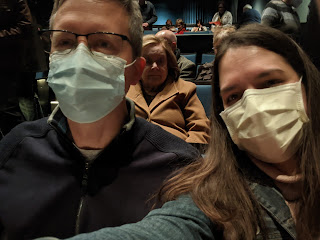 We had some lingering Halloween decor up until last weekend, when I finally put it away before we went to get our tree. I adore the tree we got this year. So well-proportioned all around. Pretty proud of us that we went to get this in the afternoon, got it put up, lights on, and decorated all that evening. And we got a wreath this year as well! 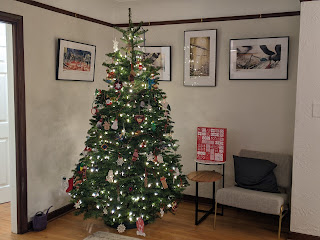 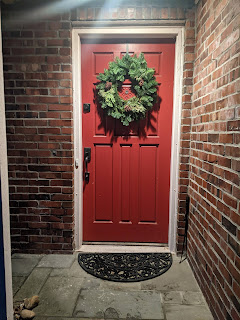 Ryan is off for the next couple weeks and I've got some days off here and there, so we can finally start getting into Christmas!

*Somehow = you have to have been on the board for at least 1 year before you can be president and everyone else on the board had either done it for too many years already or were having to take a break from the board because they were starting new jobs or couldn't take it on because they were going to be having a baby so I felt bad saying no when I had slightly less going on than others. Or less new things at least.

Wow, there was A LOT going on in this blog post. I would honestly be pretty shocked if your mental health hadn't taken a hit from all this. I hope you're feeling a bit better now with the holidays (almost) over. Ugh. Life is not for the feint-of-heart. I feel like I should say more, but it's hard to say anything very meaningful in a comment. But I'm thinking of you and your family through all this.