We've been excited for the holiday season at the office since Halloween ended. We decorate our small area of the office year round, but the level of decor has been steadily increasing through the year. My coworkers also noticed I had yet to bring in family photos near my desk, so I walked in one morning to find some excellent photos of them up above my desk, titled "BC Gang Family Photos" - Ryan was so happy to hear I finally have a family, lol. (For the record, this did prompt me to bring in pictures of Ryan and the kids, but I'm definitely keeping the BC Gang photos as well.) 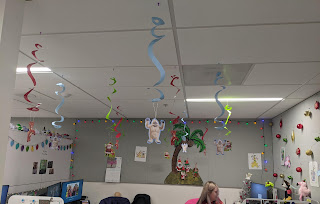 The genetic counselor pod was also highly decorated, with a cardboard fireplace, stocking, lights, etc. It's been delightfully festive.
We got our Christmas grapefruit a week or so before Christmas and have been enjoying it as usual. 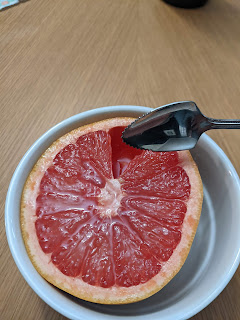 Then we got more snow! We've now had two snowstorms and that's two too many. There eventually was enough that I actually had to shovel and then it was supposed to get really cold, so had to put salt down as well. 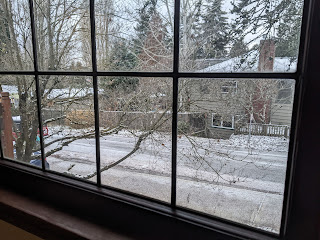 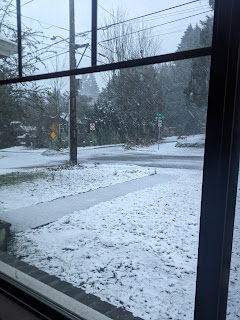 As things froze, we had our usual circus of folks getting stuck at our corner. This car actually ran into the neighbor's fence and required a tow truck to get unstuck. Minutes after the tow truck took this car away, another car came along and almost hit the fence as well. 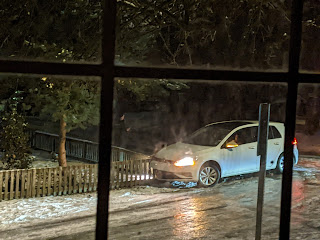 And none of that was the worst of it yet - the next morning we got freezing rain. You can find all the videos of cars, bowls, people, and pets sliding all over the roads and sidewalks on tiktok, youtube, or whatever your preferred platform is. I became the designated person to take out the trash/compost/recycling given I have yaktrax - they work really well, by the way! Thankfully fewer people attempted to drive on the roads after that, but there were still some, none of whom fared all that well. 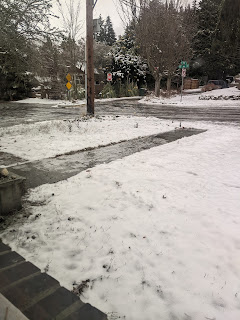 Of course, all of that put a serious damper on holiday shopping and shipping. We still managed to get almost everything in time because on Christmas Eve we warmed up from the teens/twenties to the 50s and switched to regular rain, which cleaned up the roads and sidewalks beautifully.
I got to baking. I actually did some prior to having days off because we had a cookie exchange at work. I always have to make Magic in the Middles as these have been designated the official BCG cookie, but also wanted to make cranberry macadamia bars. However, couldn't find the recipe anywhere - thankfully my sister had it and texted it to me. I had several recipe cards I was missing and realized I must've put them somewhere odd the previous Christmas.
The next week, I discovered they'd all been used as bookmarks in our cocktail book the previous year! Glad they aren't permanently lost at least! 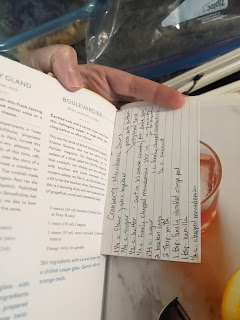 I do highly recommend the cranberry macadamia bars. We made those, magic in the middles, and gingersnaps - it's probably been a decade since we made gingersnaps and I'd forgotten how much I like them. Ryan made toffee.
For Christmas Eve dinner Ryan made beef and broccoli stirfry and we had bok choy and Korean lettuce salad as sides. As usual, the George C. Scott version of Christmas Carol preceded bedtime. 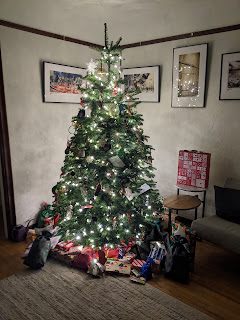 Christmas was pretty simple and small this year. M got books and games and rock stuff - a rock tumbler, identification book, etc. G got a chess board, video games, and books. It was a lovely relaxing day. The next day I got started on one of our two new puzzles this year and completed it a few days later. 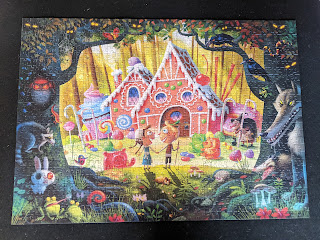 New Year's Even I started on our second puzzle and got the frame done before it was time to focus on our evening prep. We also got to see the progress of M's first batch of rocks going through the rock tumbler as they'd completed their first stage.

I've struggled to find dried currants at our grocery store for the past year plus and finally remembered to check on Amazon, so was able to prep some - soaking with brown sugar, tea, and orange zest overnight - to make bara brith. 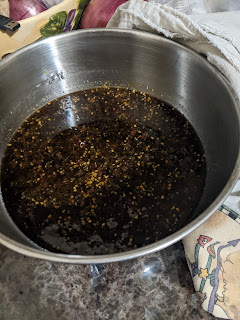 We watched the second Thin Man movie with my sister's family - the last good one since after that they try to go sober and the characters aren't nearly as funny when they're not drunk it turns out. So we'll have to come up with something else for next year's movie. Maybe Auntie Mame. Or How to Steal a Million ("Leland Davis. Or was it Davis Leland?"). We've got a whole long list of Golden Age movies to share with our kids and spouses, so I'm not worried.
New Year's Day included more work on puzzle 2. M helped with some of the mushroom caps. 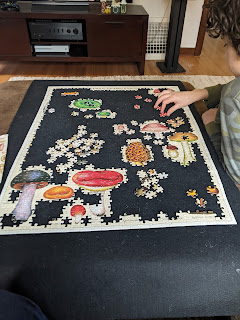 And I made the bara brith! The first time I made this I followed a suggestion in one of the recipes to use raisins and currants - that batch really solidified that I just don't like raisins in baked goods or in anything generally. So now I use just currants. The fruit/orange/tea flavor can be a bit of an acquired taste, it's grown on me and now I love it. 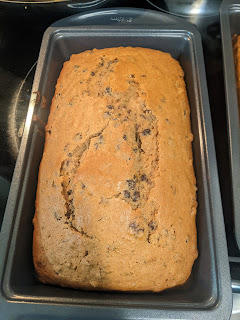 We all had one last day off after New Year's. I got the ornaments off the tree and worked on the puzzle more. G joined in for the very last bits, where I was just working on the pieces with tiny hints of mushroom and the background with no mushroom at all - the hardest parts of the puzzle. All done - just in time to go back to work and school! 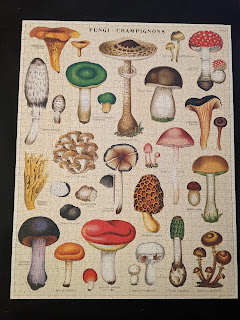 That is very good-looking grapefruit! I am glad you found your missing recipes!

Sounds like a lovely, peaceful holiday. Every time I eat a grapefruit, I think of you. I only had one this season, and it was delicious. Sabrina and I have finished a couple of puzzles now. We didn't get started until New Year's Eve, so we just finished the second one last night (Jan 5). Good times! We just might do another one or two.
Thanks for keeping us updated. I love reading your blogs!

What a wonderful holiday you had!

(I'm always finding things stuck in books; I recently found a birthday invitation I had stuck in one of my textbooks and, well, let's just say we didn't make it. Hahaha!)