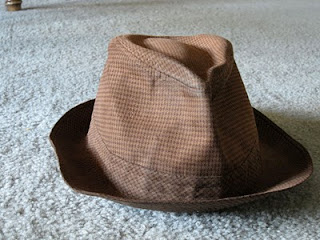 We finally made it home around 9 pm, still needing to clean Gareth up and feed him something before sending him off to bed. We turned on a show for him and gave him his blanket to distract him while I removed the sliver. Then Ryan held him while I cleaned the blood off his knee and applied hydrogen peroxide (which Gareth really hated) to make us feel better about the dirt that I couldn't wash out. Thankfully our neighbor had just purchased some large band-aids, which we told him was a sticker, and he was good as new. I made up a peanut butter sandwich for him and finally got him to eat some of it, even though all he really wanted to do was suck his thumb and hold his blanket.
After getting Gareth to bed Ryan and I discovered that there really isn't anywhere that delivers in our neighborhood, or if they do they were already closed. So we foraged around the kitchen for a hodge-podge dinner of our own. Definitely not the most successful of our outings thus far. But we have the computer back now!
Posted by Erin at 4:10 PM

Man, oh man sakes alive, what a trip! I probably might have broken down at some point and cried too!

But hey, not only did you get a fixed mac out of the deal, you came away with a pretty sweet hat too! I love strangers who are kind.

Wow. I hate days like that. By the end I'm so exhausted and frustrated it's usually all I can do to not sit and cry over the whole thing. This is also why I prefer subways to buses; for whatever reason they seem WAY more reliable. Maybe because they run on a track? So you know it has to pass your stop eventually! A bus could have gone off anywhere!

But I have to agree that that hat is awesome. Keep that for forever, please.