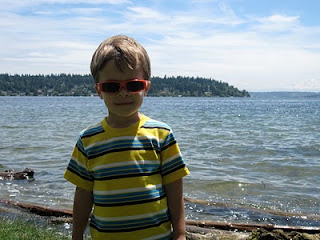 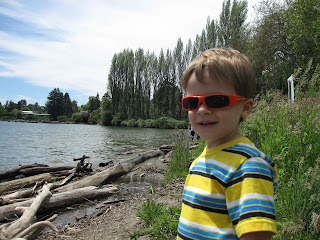 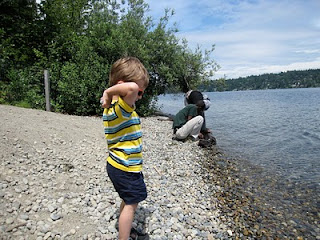 The people in the background of the picture asked me if Gareth was my son or my brother. She was pretty sure he was my son, but it sounded like the man was guessing my brother. I'm assuming I just look so young that it's not un-imaginable that I could have a 3 year old brother! :)
It was a fun trip, but my legs are worn out. At least I can say I got my exercise in for the day!
Posted by Erin at 4:28 PM

Sadly, that was exactly what I thought about that picture too.

Seattle beaches aren't much good for laying out in the sun, but they are GREAT for throwing rocks in the water!

If what you were looking at was one mountain all by itself, it was probably Rainier. (You know you're from the Pacific Northwest if you say things like, "The mountain is out today!") If it's a whole line of mountains then it's either the Cascades or the Olympics. Although occasionally Mt. Baker shows up, too-- it's a lot further away and looks a lot smoother than Rainier...