It all started with our insatiable desire for raspberries, of which there are plenty in the backyard here. Gareth gets excited whenever I ask if he wants to go pick some berries. Partly because he likes to go talk to the chickens as well and tell them that they don't get to eat berries and to stop yelling. But that's beside the point.
On my birthday we all headed out to the raspberry bushes. It seems that no one else has been picking them, so there were plenty around for us to enjoy. Ryan was willing to join us since there were (amazingly) no bees around. We all had a marvelous time and went back inside to enjoy the fruits of our (not very difficult) labor.
Walking in the door I noticed a small welt under Gareth's eye. I assumed it was just another mosquito bite and thought nothing more of it. Until we ate dinner with our neighbors and they commented that his eye was a bit puffy. "Oh, yes, I suppose it is! He got a mosquito bite." And I proceeded to not make a big deal about it. Until he woke up the next morning: 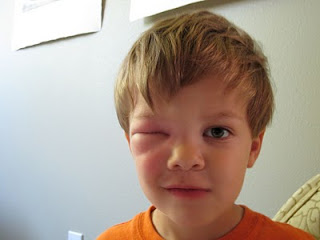 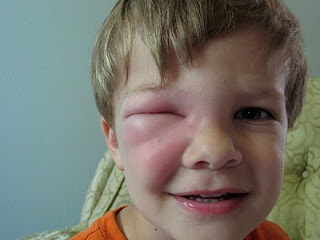 And these were taken later that afternoon, after a couple of doses of Benadryl. He opened our door in the morning, said, "Mommy, I need..." and burst into tears. It took me several minutes to get his head out of my shoulder and realize what was wrong. Thankfully our neighbors lent me their car so that I could get the Benadryl quickly. After I arrived home, we spent the morning with Gareth holding his hand over his eye, laying with his head in my lap, and sucking his thumb while holding his orange blanket. We watched a lot of Gareth's favorite shows on the computer. And I didn't get much of anything done at all.
I was getting a bit worried by the afternoon when the swelling didn't seem to be getting any better and even more so the next morning when it definitely wasn't any better. I had to run to the store Wednesday morning and got plenty of strange looks from people as well as several people asking about it, especially as it started to take on a slight purple-ish hue. Needless to say, both Ryan and I were grateful when Gareth was suddenly able to open his eye fully Wednesday afternoon. It's mostly better now, though slightly swollen still, and has a more bruised look about it. And Gareth's desire for raspberries has not diminished in the least. (Though he has also developed a taste for Benadryl, which he calls "tasty medicine".)
Posted by Erin at 9:56 PM

Oh man, poor sweet Gareth! That looks like it would have made me cry as well, to wake up with an eye like that!!

Oh dear! Allergic to raspberries, eh? Or did it turn out to actually be a mosquito bite? Mine swell up pretty big sometimes.

Nope, not the raspberries (he eats so many that I think we would've discovered that allergy a long, long time ago). Either a mosquito or a spider bite. There were a lot of little spiders out around the raspberries that morning, so that's a definite possibility.