If exploring means shopping, then we did some on Memorial Day. It'd been rainy every day since we'd arrived. Every single day. Ryan didn't bring a jacket or a sweater with him since his jacket at home is fairly useless and old and ugly (the sweater we just forgot). So we headed out in search of a jacket. We came home with three. It was almost four, because there was a fake leather one that looked really nice and was on sale for a really, really good price. But Ryan decided four jackets was a bit ridiculous for now (though we will eventually purchase him a real leather jacket, because they can look great, and a trench coat a la Bogart, and the list goes on and on). But one of the three is super-casual (more athletic) and the other two we absolutely fell in love with.
So, here's Ryan modeling his awesome new jackets: 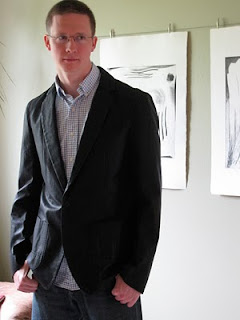 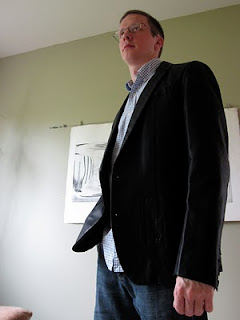 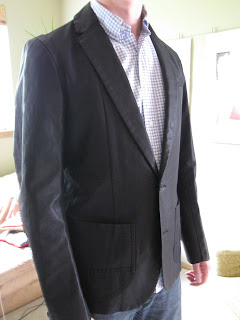 The first jacket we found. Awesome, but we needed something else for everyday wear. 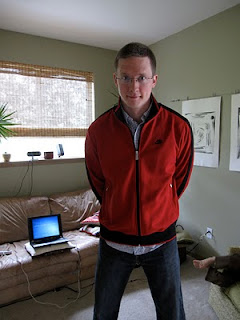 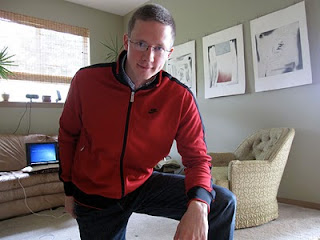 The second jacket. Great for casual wear. But we still wanted something in between jacket one and jacket two. 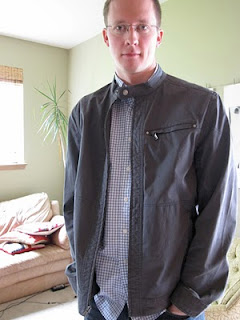 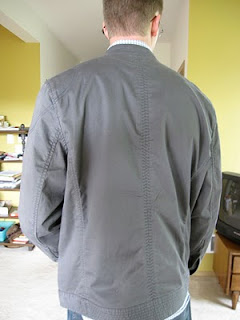 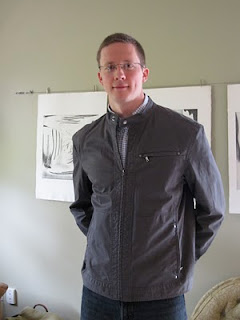 The third jacket. This is the one I totally fell in love with and would have mourned if we had left it behind. Especially since it was the last one of its kind in the store.
Totally worth the money spent, in my opinion. I'm very excited about the steps we've been taking in revamping Ryan's wardrobe. Next up: pants. Or maybe a coat. Or shoes. Unfortunately we can't just do it all at once!
We also went and checked out the folklife festival that was going on, so our exploring wasn't solely shopping. It was fun to go just to see, but I doubt I'd go again if we ever came back this way. Basically, I'm glad it was free. We listened to a local fiddling club play some pieces. There were several vendors selling artwork, brooms, jewelry and so on. Outside of the main venues it seemed like random people would come and try to play their harmonica or guitar and get money from people. Most of the people doing this were beginners or simply not very skilled. A lot of hippie-type people were in attendance. It was fascinating for people-watching but not really worthwhile for much else.
Posted by Erin at 4:00 AM

Your description of the folklife festival totally has me laughing. So Seattle. So hippie and try to be deep, but mostly just floundering in mediocrity! I love it.

Love the jackets! Very nice. We've been having routine shopping trips here too, to get Scotty outfits for work. And then for me, too, to balance things out...

Those are great jackets! I wish I could get Devin to let me outfit him like that. I also love the way he let you take pictures of him modeling the jackets! What a great sport!!

It's definitely not me doing the outfitting! I just go along to provide some feedback, but Ryan's found some great blogs about men's fashion and we're slowly working on getting him items that are essentials and fit correctly. We choose an item we want to work on and check out what the blogs have to say about said item before we go out looking. Very helpful.

Michaela, we could definitely do some shopping for me too, but Ryan's worse off, so right now we're focusing on him. Lucky you to be getting new clothes!

Hmm, think you could get Ryan to post some of those blogs he's been reading? Derrick needs new clothes too...

I know one of them is putthison.com. I'm pretty sure he found some other helpful sites as well, so I'll have him post what those are.

Okay, apparently putthison.com is the only one he's subscribed to. BUT, he did find this Hacker News thread helpful: http://news.ycombinator.com/item?id=1136261

The thread and the article it's based on are probably good places to start if you're wanting advice on how to dress a man.