Malcolm is halfway to being able to start solids. Hopefully, anyway. I'm a little nervous about how he'll do with that and if we'll actually be able to start around six months or not because this kid has a serious gag reflex. I thought Gareth's was bad as an infant, but Malcolm gags on nothing multiple times a day. At least lately he has stopped puking every time he gags, but I still find myself trying to decide if I should run to the sink whenever the gagging starts. I'm excited for solids because then he'll be nursing less often. Nursing is not my most favorite pastime; it tends to make me feel a bit trapped. It's been a little better this time around since I'm more comfortable nursing in public. I didn't take much notice of when Seattle made breastfeeding a protected civil right, but I've got to say that it actually helps a lot to have that in place. It was already state law, but the Seattle measure makes the state law more enforceable. Knowing that that's in place and seeing other women nurse in public is definitely helpful in increasing my comfort with feeding my child outside of my home. This means that I can take Gareth to the science center or the park without stressing about whether we'll be able to make it there and back home before Malcolm would want to eat again (right now we wouldn't as he still eats every three hours or less). I was tempted at the beginning to pump all the time and just feed him breast milk from a bottle, but in the end that's just more work than it's worth for me. Ryan tries to feed him a bottle if I've got a rehearsal or go out with friends (Malcolm's not loving the bottle right now, maybe we need to try a different kind?), so I've got a fair amount of freedom. But I'm still excited for him to start on solids and hopefully wean around a year.

He's a cute baby, something we're both enjoying more this time around since we're not nearly as overwhelmed as we were with Gareth (sorry, Gareth!). While we enjoy that he's cute, he's still boring like every newborn is. You hold him for five minutes or less and there's not much you or he can do, so then you put him down and he screams. We're excited for him to grow up a bit. 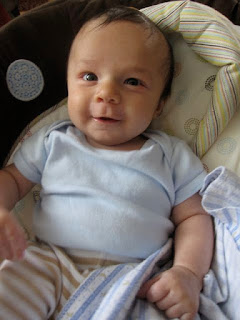 He's started playing with his hands a bit and trying to chew/suck on them. Malcolm has found his thumb a couple of times but this has just caused increased frustration as he seems to know there's something there that was great fun to suck on, but he usually won't move his thumb out from his other fingers enough to really be able to suck on it. Instead he sits there bobbing his head all around his hand, gnawing and sucking on whatever comes in contact with his mouth, but never really finding satisfaction.

He seems to be more interested in books than Gareth was at this age. He'll actually sit calmly through Brown Bear, Brown Bear and stares most intently at the black and white pages (that would be the dog and the sheep, for those who don't have the book memorized). He loves having his arms and legs flailed around wildly. His other love is his changing table. You put him down there and he starts smiling like crazy. He's not such a fan of shirts going on or off over his head, but if all he needs is a diaper change you can be certain you'll have an ecstatic baby by the time you're done. 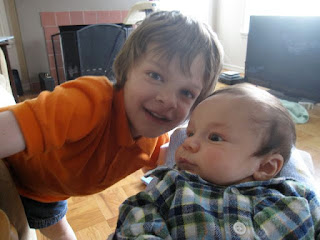 He smiles a lot, especially at Gareth. He seems fascinated by all that Gareth can do. He also has an adorable pout, but I've yet to be able to capture it on camera. Even his smiles seem hard to catch. Ryan can trigger the pout by speaking in a very deep voice. I usually trigger it by playing the clarinet.

Sleeping is an area we're still working on. Around 11 weeks he started sleeping through the night, but that only lasted for a little over a week. Now he'll sleep through a couple of nights then wake up between 3 or 4 for a few nights. But we have to acknowledge that we're still pretty lucky in the sleep department. He's been waking up only once during the night from just a couple weeks old and he puts himself to sleep every night with no help from us. And, finally, his most recently acquired skill (he'll hold his upper body up like this for several minutes usually): 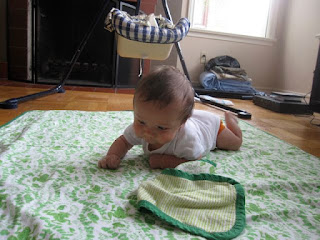 Cute boy! Glad that all is going well. Nice about the breast-feeding in Seattle!

Savannah had a horrible gag reflex too. She gagged on everything! She did not put anything in her mouth, she would just hold it in her little fist. She stopped having huge problems with it at around 18 months. We still had to be careful about what to feed her but she stopped throwing everything up.

He is adorable! More pictures!

He is a darling baby, that's for sure!!

I think it's funny that he loves his changing table...all four of my kids had some kind of mutual understanding that changing time was wiggling and kicking time. Drove me NUTS.

Yes, Myrna, Seattle nice about things like that. Kinda sad it has to be a law at all, but good they did it.

Sabrina, that's interesting that Savannah wouldn't put things in her mouth. Gareth didn't gag much at all at this age, but would only put his thumb in his mouth for the most part. Him swallowing foreign objects just wasn't something we had to worry about. Malcolm, on the other hand will put anything in his mouth, even though he's constantly gagging. Maybe when he gets older he'll stop if the gagging problem continues.

Marianne, Gareth was the same as your kids. He'd get a mischievous glint in his eye even and then do all he could to make changing him as miserable and messy as possible. The worst was once he could roll over and then it was impossible to get a new diaper on. I'm hoping Malcolm will continue to be cooperative with the diaper changing as he gets bigger!

I remember sitting in church when Bentley was a newborn and calculating that I only had ___ more Sundays when I would have to nurse my baby at church because that seemed like the hardest thing in the WORLD at the time. (I think my biggest problem was that I didn't have any church clothes that were also nursing friendly and we were too poor to buy me much of anything else, either.) That was awful. Then nursing got easier and it stopped seeming like such a big deal. Kendra actually weaned herself around 10 months and I was a little sad. And then with Ryder I got way more relaxed, and if I was going to be gone, I'd just have Craig give him formula. (I hate pumping, so I finally just decided it wasn't worth it to me.) I think the first time Kendra had formula I felt like she was tainted or something!

Anyway, I'm just rambling. I'm glad Malcolm is doing so well-- he sure is a cutey!!!

What adorable pictures! I feel like I need to come see Malcolm again because he has changed soooo much.

Yes, Savannah gagged on Goldfish crackers when she was a year old and never did like Cheerios or other finger food like my other kids did. She would just hold it in her hand until it disintegrated.

I'm glad you are enjoying Malcolm!