Early this week we hopped on the bus over to the Burke Museum for a last week of summer break outing. We hadn't been before and I'd considered having us go on a weekend as a family, but museums aren't really Ryan's thing. Gareth had seen the pictures of the dinosaur fossils on their website though, and had been asking when we were going to see the fossils ever since.

I hadn't been to the UW campus yet either, so it was fun to see a bit of that. It's quite a nice campus, with lots of lovely brick buildings, lots of green (of course), as well as the requisite nasty ugly building from the 60s or 70s (is there any campus that doesn't have one of these?). 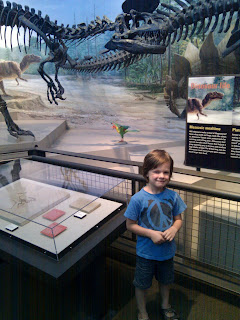 We got to the museum a bit before our friends, so we hung out looking at the fossils and other items on the first floor until they got there. Gareth was very impressed with the dinosaur fossils and enjoyed looking at the polar bear and lion skulls as well as a display on volcanos. He was excited enough to enjoy looking at them all a second time when his friend got there. The museum starts charging admission at age 5, which is good because the 2 year old in our group was less than impressed with everything. But the older kids enjoyed themelves. In addition to the fossil and volcano displays they also had several stuffed birds and squirrels and things and a display on various Pacific cultures. 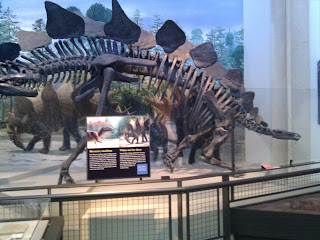 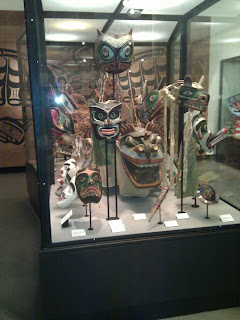 We ended by checking out the photography exhibit. Gareth said this wasn't very interesting, despite asking questions about several pictures and stating they were "cool" while we were in there. But I can understand why photography wouldn't compare to dinosaur fossils and playing with puppets for him. Overall, a successful outing. Now I'm waiting for school to start so I can go to King Tut with Ryan during the day. And there's a display of quilts over in Bellevue that I hope to check out soon as well.
Posted by Erin at 2:26 PM

I did not know about this museum at the University of Washington! When I was there (for a conference) I was just mostly in the music building. Wish I had known about the dinosaurs! Fun times for you!

Sounds like the perfect museum for little boys, though I guess Gareth is probably more of a big boy than a little boy. :)