I tried making an omelet for the first time the other day. In fact, I believe it was the first time I've ever eaten an omelet as well. The recipe came from the Quinoa 365 cookbook, one I'd been drawn to several times just from the picture. Ryan isn't one to care about aesthetics of a meal, but I find when I'm looking for recipes to try that it helps me a lot if the picture of the dish is colorful and otherwise aesthetically pleasing.

First, I chopped the vegetables. See how bright and cheerful they are? 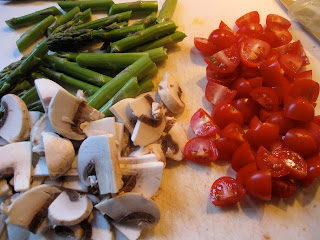 Then I sauteed the asparagus, mushrooms and green onions (this smelled so delicious): 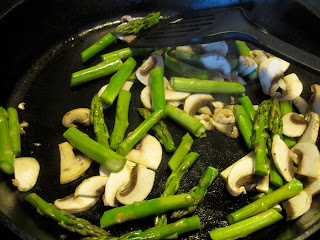 Then tossed those with the tomatoes: 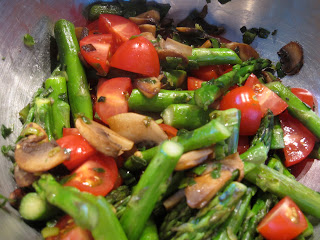 At this point I found out Ryan's bus hadn't come yet and he'd be later than usual and kinda forgot about taking pictures. But when he was home I mixed together the eggs, milk, quinoa, and pesto and started to cook the omelet. The recipe called for two eggs for one omelet, and the omelet looked quite a bit smaller than the size pan I was using. So I figured I'd double that and it'd work out decently. In the end it looked like our omelets were much thicker than the recipe pictured, so maybe I should've stuck with the single recipe for our pan. As it was, I wasn't really sure how to get all the egg cooked without burning the underside. The recipe said to just cover it for a couple of minutes until the top was cooked, but it didn't seem to quite work that way for me. In the end, I managed to get everything cooked, but the bottom of the omelets were a tad dark.

I transferred the omelet to a plate and added the cottage cheese. Here's half of an omelet (they were huge): 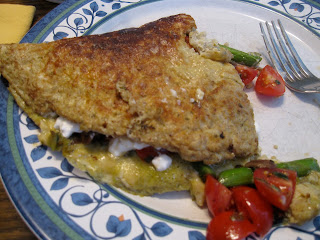 Not quite as pretty as the cookbook picture, but still pretty tasty!
Posted by Erin at 10:15 PM

Wait a second-- all these pictures and no recipe??? This post is just torture! I want to try making this, too!!!

Looks delicious. Chris is the omelet maker in our house. Somehow he knows how to flip it without messing it up.

Sorry, Alanna, I don't want to get in trouble for posting a recipe that someone else has the copyright to. You can probably find the cookbook at your library; this is the Ranch House Omelet recipe.

I'll look for it!

I'm so used to finding most of my recipes on-line, I never think about copyright stuff any more! (Craig, who worries about it a lot with his job, is always getting after me for that!)