A Break, Sort Of

July was crazy. Playing in the community band is fun, but it means two weeknight rehearsals each week and then a concert every Saturday or Sunday (sometimes both) through the month of July. Usually our director (who I take lessons from) brings in some soloists from out of town. People like Robert DiLutis, but this year they all happened to be in Europe or in the middle of moving or something. So instead he featured the first clarinets at each concert, which was rather fun. One of the second clarinetists was named the best freshman or some such at her high school this year, so for one concert he made her an honorary first and we all played a Pierne solo together, with Flight of the Bumblebee as an encore. At the last concert I played "Two Little Bullfinches" with one of the other firsts. So, yeah, that was all fun but quite tiring. I think Ryan is happy that I've got a month off as well. Of course, I need to practice like crazy this month to prepare for the Seattle Phil audition at the end of the month, so the break is really only from performances. If I get the spot, then those rehearsals start just after Labor Day, as do clarinet choir rehearsals.

Early in July we celebrated my birthday, which actually went quite nicely this year, unlike the year when I had to spoon-feed Ryan because he was crazy sick or the year he spent the evening all depressed because he hated his job and my birthday went forgotten. We purchased a Chocolate Caramel cake from a dessert store here, and it was delicious and worth the very many pennies it cost. 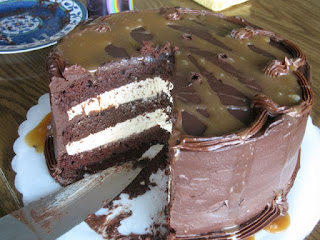 Malcolm has hit four months, meaning he got to go get some shots, which he wasn't happy about. He really wasn't thrilled with any part of the doctor visit, actually, but I can't blame him since he'd just fallen asleep and I woke him up to get in the car and then woke him up to get out of the car and then he fell asleep again while we walked from the car to the office, and he had to wake up again when they were ready to start his exam. For those interested, he was 24.5 inches long (30%) and 13 pounds, 9 ounces (20%). His head is in the 60th percentile. He's rolled over a couple of times, but mostly just rolls to his side rather than all the way. Gareth was never much into rolling and it's looking like Malcolm might be the same. He looks like he'd much rather be able to get his knees under him and start crawling. He sometimes seems to be on the verge of laughing, but hasn't ever managed that yet either. 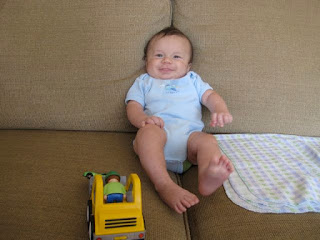 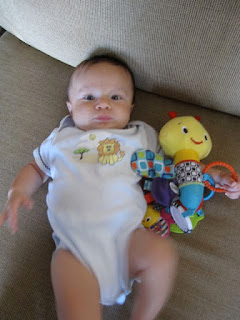 Malcolm and his Firefly

Gareth is getting really excited for school, but still enjoying summer at the same time. His backpack just arrived yesterday. 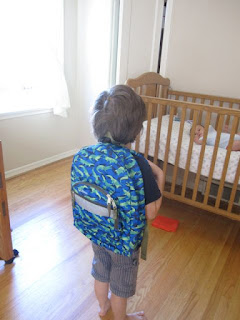 School starts in September, just after Labor Day as well. Hopefully we all enjoy our last month before things get crazy. I'm thinking we'll get in a couple of hikes or museum visits before then at least.
Posted by Erin at 5:22 PM

Cool! I think it's awesome that you're keeping up your clarinet skills. Good luck on your Seattle Phil audition! And thanks for the update on Gareth and Malcolm. :)