So back when I wrote a post about Gareth's birthday that ended up being all about the cake I made, I promised I had some pictures of him opening presents and whatnot. Here they are: 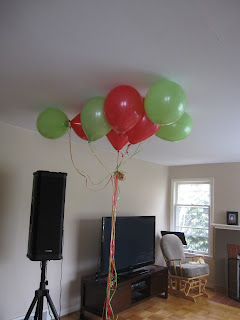 Eight surviving balloons. I purchased twelve, even though we only had seven kids attending. But they were cheaper per balloon if I got twelve. And it's a good thing I did because they over-filled them or something and they were popping like crazy. One more popped before the party was over, so we ended up with just enough. Which was unfortunate for the kid who lost hold of his as he was walking out the door. 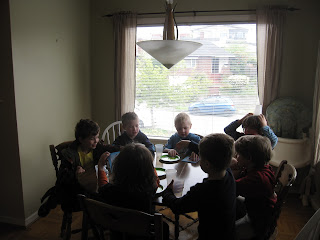 Seven 5/6 year olds in our small house. It was loud. Fun, but loud. I was actually pleasantly surprised that nothing in the basement got destroyed. All the kids seemed to have a fun time. Two hours was perfect - I would've gone crazy with more. As it was, I had a headache from all the noise by the time it was over. I think seven will be the limit for all future years.


Gareth doesn't look excited in this next picture, but he actually was. This present was from a friend unable to make it to the party. But he and Gareth had recently been seated in the same group of desks at school, and this kid had shared his twistable colored pencils with Gareth. Gareth then took his twistable crayons to school to share with the friend. It was all very sweet, and so the colored pencils were a very fitting gift. 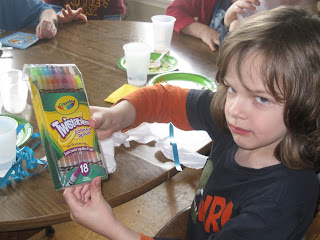 Excitedly ripping into another gift. 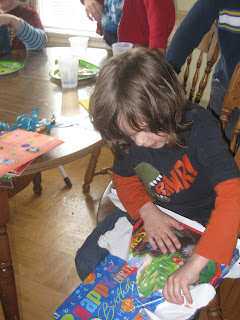