Okay, I actually don't have many pictures for this. So more of an event catch-up.

We typically make a German chocolate cake for Ryan's birthday. I don't know why, whether to try and save me some trouble (his birthday fell on an extremely busy weekend toward the end of the quarter) or just for variety's sake, but Ryan asked for a cheesecake this year. I didn't have time to look up a cheesecake recipe, so I used Google to see what I could find for cheesecakes in Seattle. We'd been to Cheesecake Factory a few years ago and I remember being unimpressed by either the food or the cheesecake. I found a place in Pike's Place Market, The Confectional, that makes mini cheesecakes. And I found some people mentioning Rusty's Famous Cheesecakes, for which I found a facebook page but nothing more. But some people were adamant that Rusty's was better than Confectional, so I dug a little more. I finally gave them a call the day before Ryan's birthday, asking how I could order a cheesecake if it wasn't too late. Rusty called me back and offered to meet me at their south Seattle office on Saturday to get me a cheesecake, so that's what we did. Ordered a creme brulee cheesecake and he even threw in a few of their mini cheesecakes for free.

Creme brulee topping makes it difficult to insert candles (5 candles because Ryan turned 32, which is 2^5). 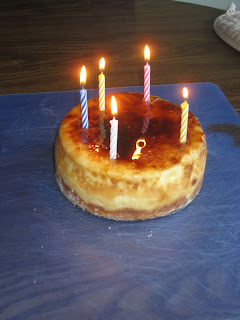 Malcolm was somewhat mesmerized by the flames. 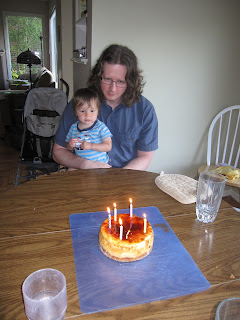 Absolutely delicious cheesecake; I'd say it's up there with our wedding cheesecake. The crust had coconut in it, which complemented the rest of the cheesecake (plain other than the topping) wonderfully. It's a small cake, but Rusty told me they usually cut it into 12 slices and, sure enough, it probably made at least that many servings for us.

Ryan can be difficult to get gifts for. I know several things he'd like, but they're almost always far too expensive. And, while he enjoys reading, he's already got several books waiting to be read. In the end I did get him a couple of books, ones that both of us will enjoy most likely. And I knew he wanted some money for the Steam summer sale, so I did that along with a card that Gareth helped me pick out. Gareth thought this card was pretty hilarious and was very excited for Ryan to open it. 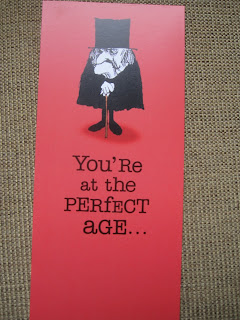 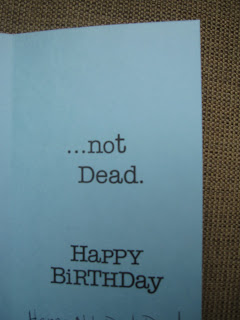 And then I went through the Chinook book to try and find something that would be new and different that Ryan might enjoy. He likes plays, but I already did play tickets for Christmas, and we're likely to buy tickets for the theatre anyway (they've been bugging me to buy season tickets and I'll probably go ahead and do it). There are some fun-looking things in the Chinook book (like an entertainment book, except way more useful, less expensive, and very small, local-store/experience oriented). In the end I opted for a kayak tour of Elliot Bay. Close enough that it'll only require a sitter for 4 or 5 hours, but something that we haven't done before. It's not like we haven't seen Elliot Bay (our temporary housing was right there), but it'll be fun to actually be out on the water. There was a coupon in there for an Orca watching kayak thing, but that lasted much longer and the travel time for us to get to the location would be longer as well. Something to keep in mind for when the kids are older.

Looks like Ryan made out pretty well! You guys need to let me hook you up with some Goldstar tickets. I'm jealous that you live in a market that actually has a lot of live entertainment (we're really small in Portland). I get free tickets each month and usually don't use them. http://www.goldstar.com/seattle/events