The district and the teachers agreed on a contract, so school started today. Thank goodness, because Gareth and I were driving each other insane. Making brownies together yesterday helped keep us both busy and from getting too annoyed with one another.

Gareth got the one teacher I'd heard nothing about and who probably would've been my last pick. But then we found out that probably 2/3 of the class are kids he knows from either pre-K or from Kindergarten last year. And a friend told me that everyone she knew who'd had this teacher loved her. Apparently this teacher also used to teach a K/1 class, which means she is probably decent at teaching kids who are all at different levels in their learning (essential since they don't start Walk to Math until 2nd grade). I got to ask her a couple of questions last week and I feel really good about her now. We'll see what happens as the year progresses, but I'm hopeful that she'll be a great teacher for Gareth. 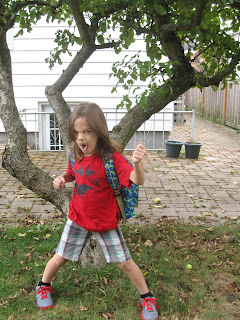 It was pretty easy to get the kids ready today. Gareth wanted to play some, but he's excited enough for school to start that it wasn't too hard to redirect him to morning prep. We've got a couple of weeks to shift to making lunches the night before most days. This year I plan to have him help with putting his lunch together more, but this morning I went ahead and made it for him since I'd decided that he should really have a bath this morning. Easy enough since he'd requested hummus and veggies. 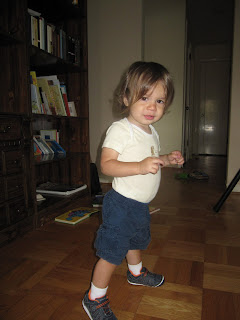 So, yeah, we got him bathed, got all his supplies put together and got ready to head out. He rode his bike today. I rather like having him walk so I get to talk with him (sometimes, if he doesn't find a friend to play with along the way), but he loves riding his bike to school and it's supposed to rain the next couple days so I figured I should let him ride while he can.

Dropped him off and then hung around for a bit to chat with some parents before heading home to get the car and drive to breakfast with some other co-op parents. Malcolm was surprisingly well-behaved at that and even managed to not totally freak out when the other little kids looked at him and then he fell asleep on the way home.

Gareth reported that the first day was "good", which is better than last year's "boring and disappointing", so I'll take it. 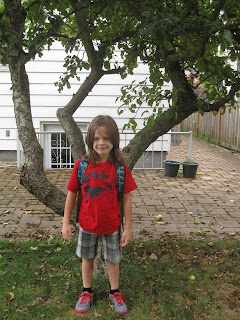 That first picture of Garrett, so classic. I bet he's going to love that picture when he's older.