We realized early in the summer that if Gareth wants to go to Camp Quest next summer we should make sure he knows how to swim, since it's on a body of water and all. We'd started swim lessons a couple summers ago at the local pool and they hadn't gone well. Ryan, at a family swim and in a matter of minutes, had succeeded in getting Gareth to put his head in the water. The group lessons proceeded to undo any small progress we had made with Gareth on our own until we finally got tired of paying money for him to sit at the edge of the pool and occasionally be taken on a tour of the pool by a teacher and pulled him out of the lessons. We decided at that point that we'd wait until he was a bit older and we'd pay the money for private lessons.

There are a couple places that I know of around here where you can do the private lesson thing. They both have a lot of outstanding reviews from other parents and the one we went with in particular had a lot of reviews about how their kids went from scared to swimming in a matter of weeks. I was a little doubtful it could only take a few weeks, but we figured even if it took a little longer we'd still end up spending less in the long-run going the private lessons route.

So Gareth started at the beginning of August, two half-hour lessons per week. I loved his instructor - she was the perfect combination of firm and nice. She wasn't going to let him waste too much time being nervous, chatting away in order to delay things. But she wasn't mean about it either. And she would give him explanations for things: You need to hold onto the edge of the pool with just one hand because if you're trying to lift half your body out of the water that will be more tiring than letting most of your body stay in the water. Or, if you look down while swimming then you won't have a problem with water going up your nose. Or, you need to be able to open your eyes in the water so that if you fall in water at some point you'll be able to find your way to the boat/shore/safety. She was firm when need be - if he was trying to cling to her instead of flipping over to his back float as instructed she would simply state, "No!" and flip him over to his back. But she was also very encouraging and would praise him when he did well. Really the perfect combination for Gareth.

I was a little doubtful after week two that he'd really be able to swim by the end of four weeks as he was so nervous about putting his face in the water and going to the deep end, but still figured he was making more progress than in a group lesson. Then in the next couple of lessons he made huge progress, and by the end of his four weeks he was jumping in and swimming the length of the pool! Not beautiful swimming by any means, but definitely swimming. Then we were off for a week or so while school started, but just one lesson later we were told he was ready for his clothes test. I'm still shocked that in just 9 lessons he went from terrified of putting his face in the water to swimming. So much better than paying for group lessons for a couple years!

He was really excited for the clothes test - he thought jumping in with all his clothes was such a crazy thing to do. As he said, "It's like I'm on a boat and a sea monster knocks me in the water and I need to swim to land!" He did great and I like feeling like he's less likely to drown if he goes to camp next summer (I'm sure they have lifeguards, but still). We've still got a couple more lessons that we've paid for, so now it seems they're just working to improve his skills. He's so much more confident in the pool now - and he loves it. 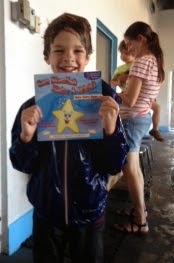 Nice. Good work, Gareth. Josie did best with private lessons as well. Swimming is such an important life skill!