This year Gareth really wanted to be a ninja from the LEGO show, Ninjago. He opted for the green ninja. Originally I would've preferred he go with red because I found some pretty awesome looking ideas for the red online, but in the end I think green turned out to be a bit easier in some aspects than red would've been, which is good since I had a hard time getting myself motivated to make this costume and put it off until October and then after getting the materials continuously put it off until this past weekend.

I still used a lot of ideas from the red ninja and also found some good stuff on a thread about Ninjago costumes. Red would've been easier because you can actually order red gis. But I ordered white and dyed it green. Color wasn't as perfect as I would've liked since the only green dyes I could find were either forest green (too dark) and kelly green, which is what I went with and turned out a bit too pastel/light. But I left things late enough that I couldn't dwell too long on that. Someone in the thread had posted an image of the serpent that's on the back of the character so we were able to print that on transfer paper and iron it on. I spent quite a bit of time trying to find square washers or something similar for the armor on the front, but had no luck. My mom found the small square things we ended up using, the best part of which was that they're iron-on as well. 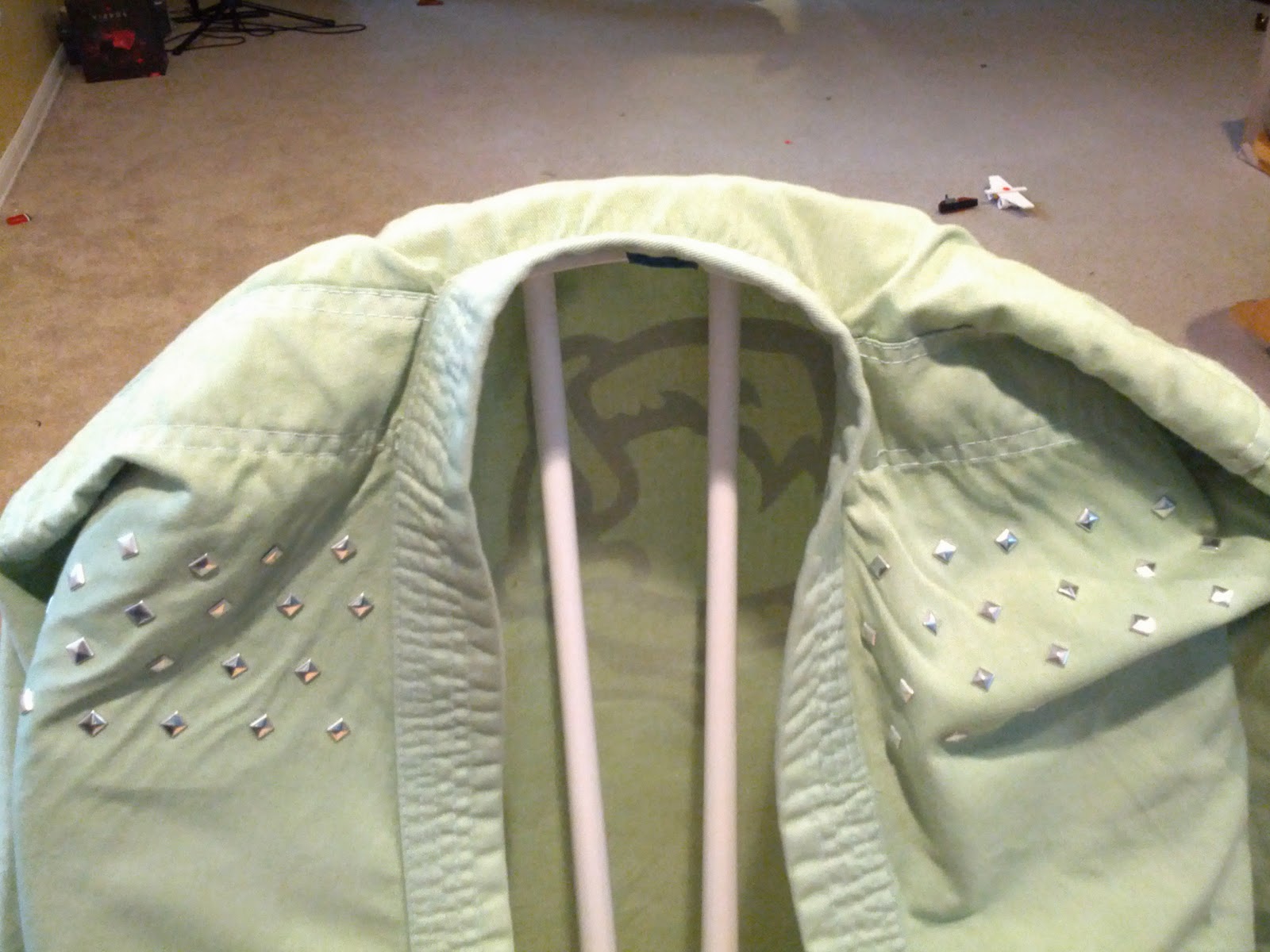 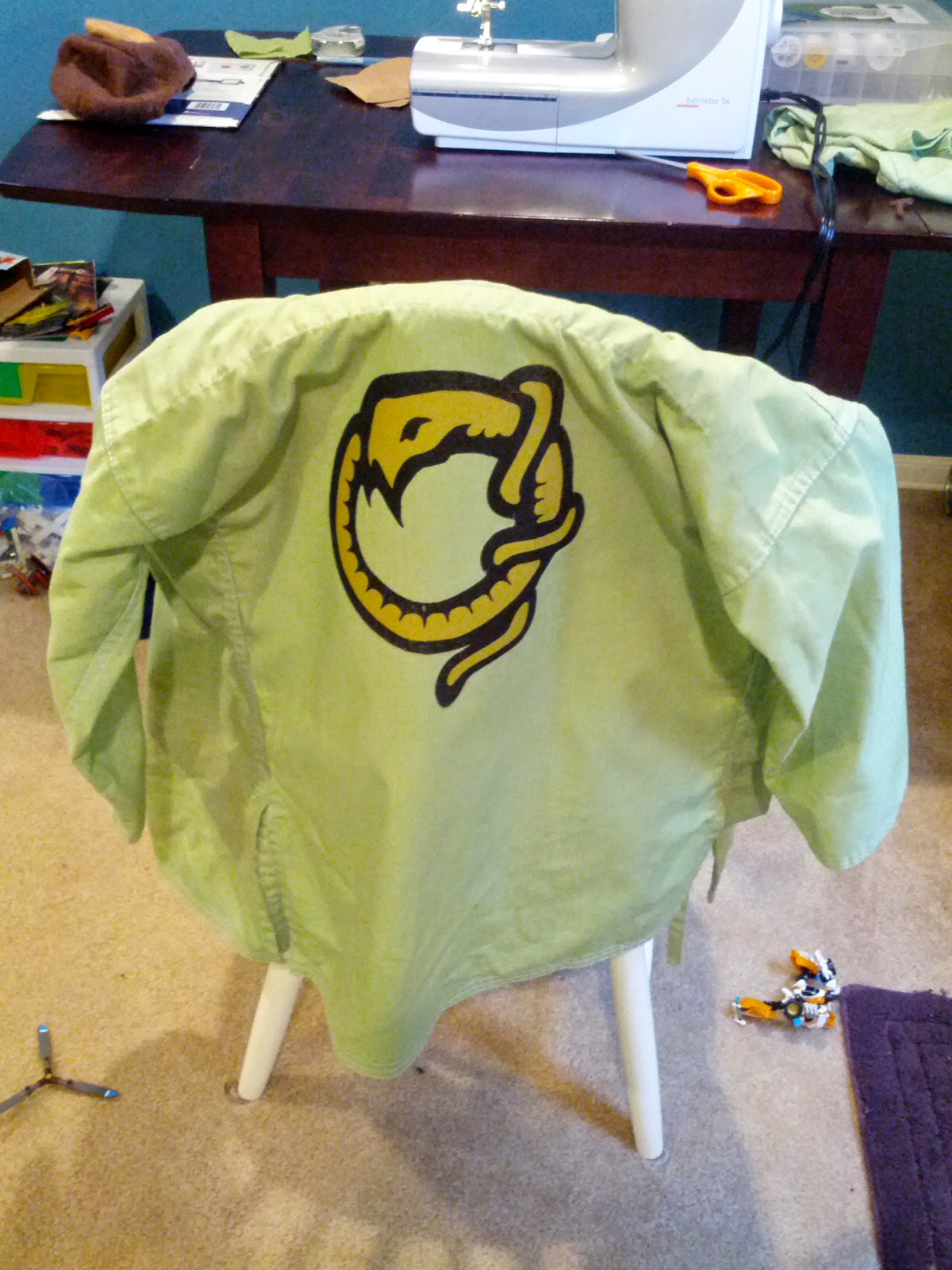 Solo cups cut in half and covered in duct tape worked great for the shoulder armor. I grabbed some scrapbooking spacers to stick them together/space them. Velcro holds the shoulder armor onto the gi. At the fabric store we found a fairly close match in color and I was able to use the pattern from the red ninja people to make the headscarf thing. The head armor is just a headband covered in duct tape and I used posterboard to make the diamond-shaped portion of that. In order to get it to arch backward rather than stand straight up I stuffed some newspaper in the back of it (duct taped on) and then used velcro to attach it to the finished headscarf. 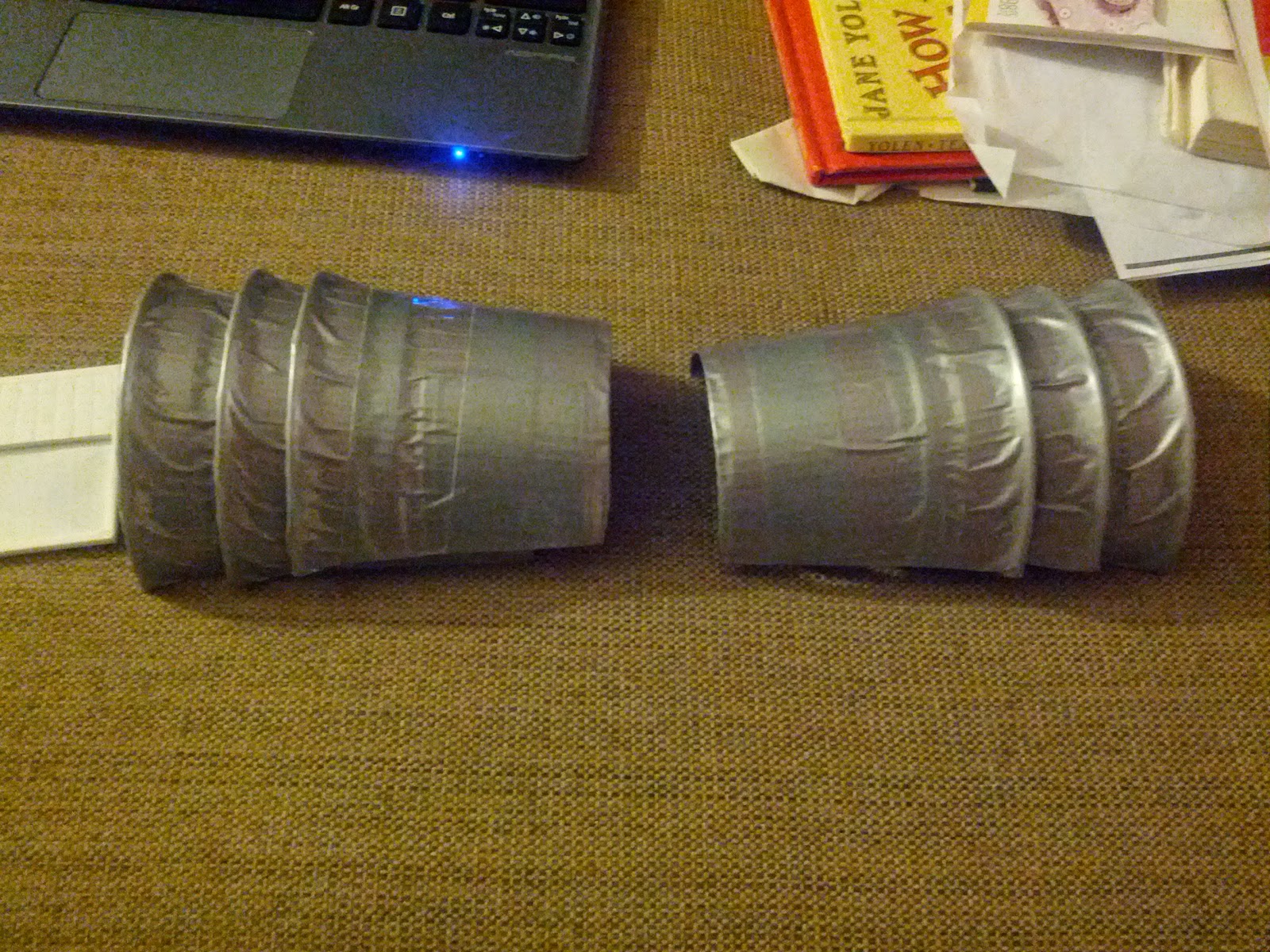 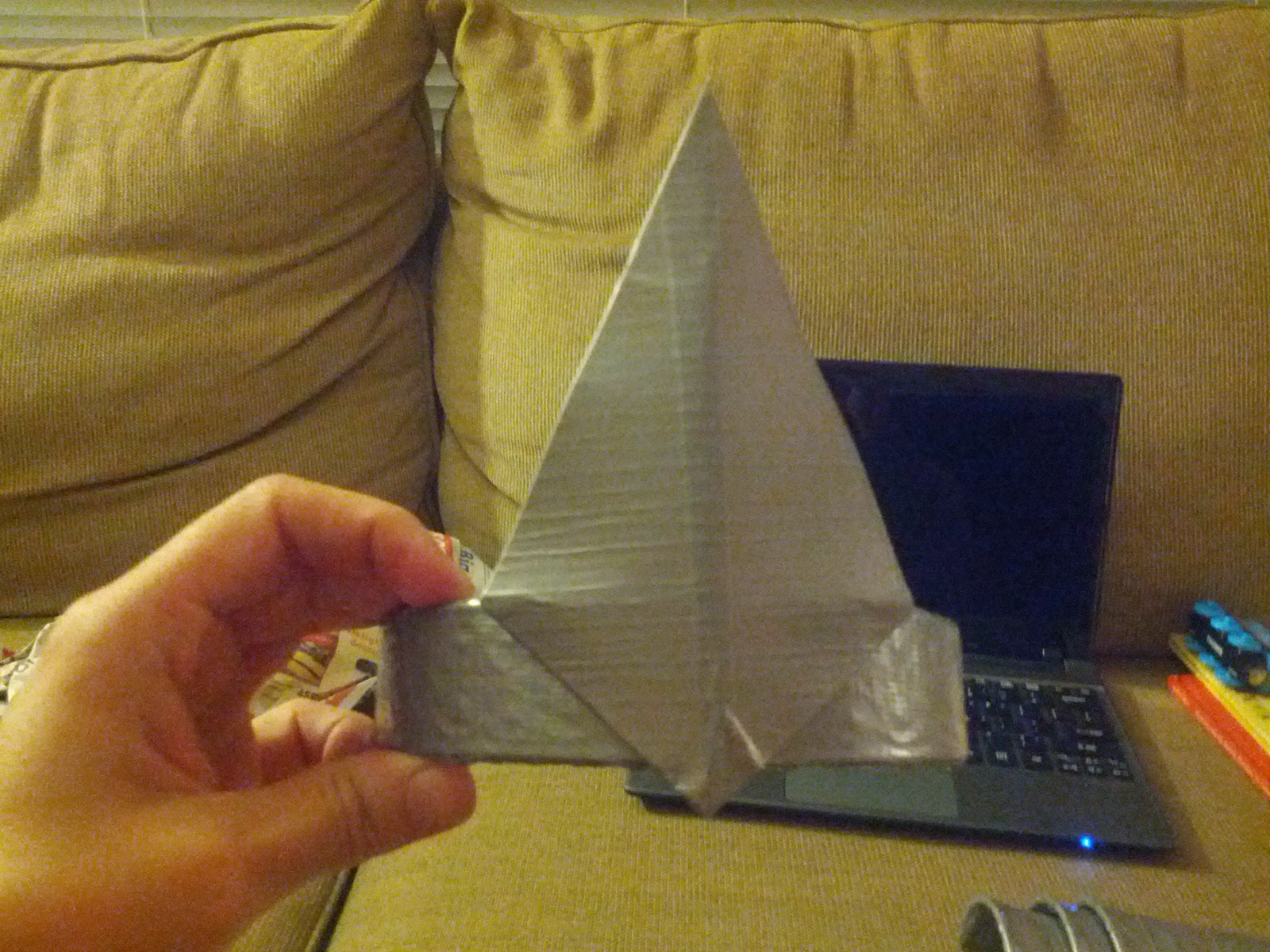 Green ninja actually has a couple of swords, but I ran out of time to figure something out for that. Garth hasn't said anything about those for a while and seems not to care much, so I'm glad for that. No weapons allowed at school anyway and since it was a rainy day here I figured he probably wouldn't mind not having an extra thing to carry around (even if I figured out how to attach to his back, it could get annoying quickly) while trick-or-treating. 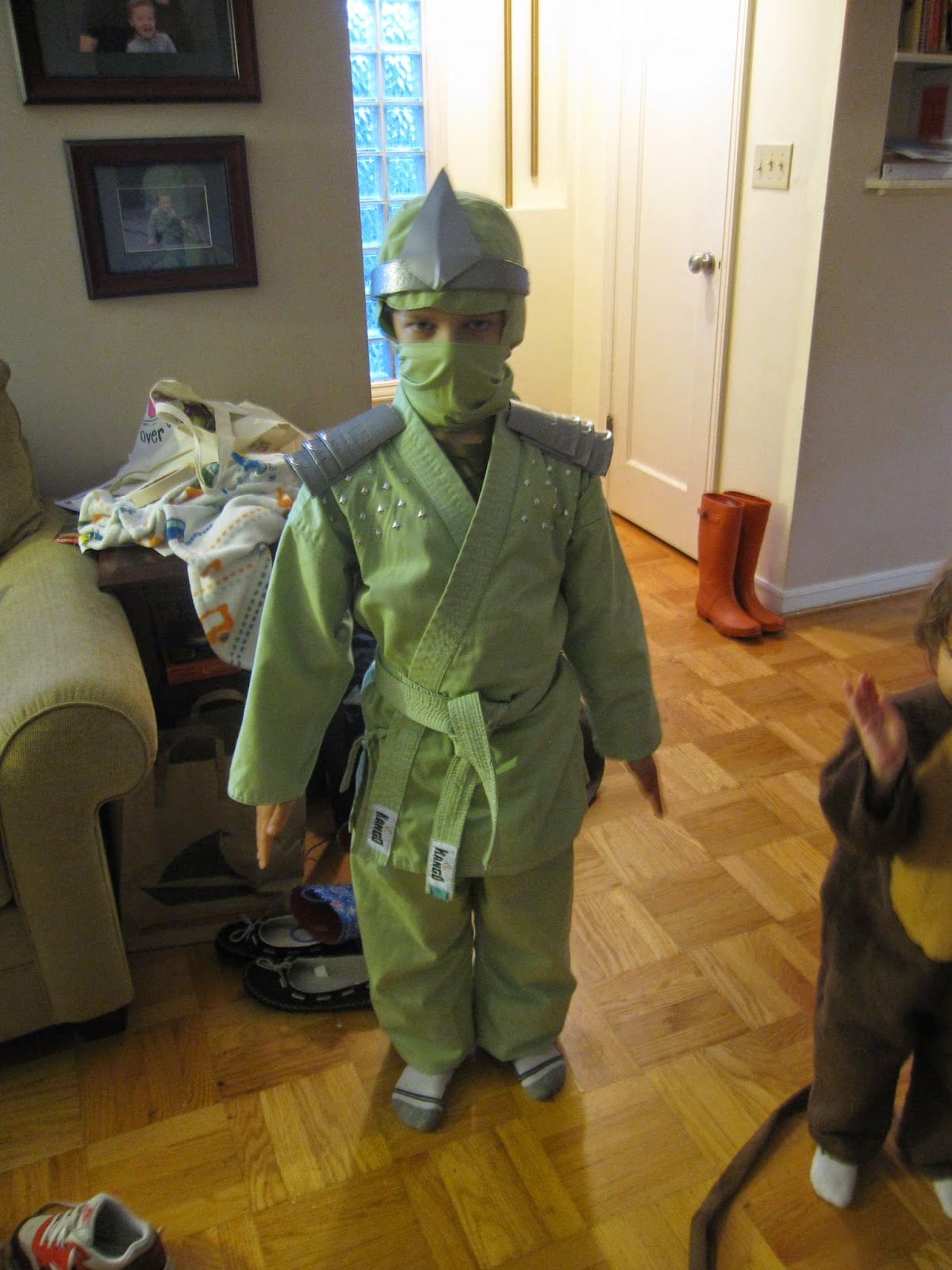 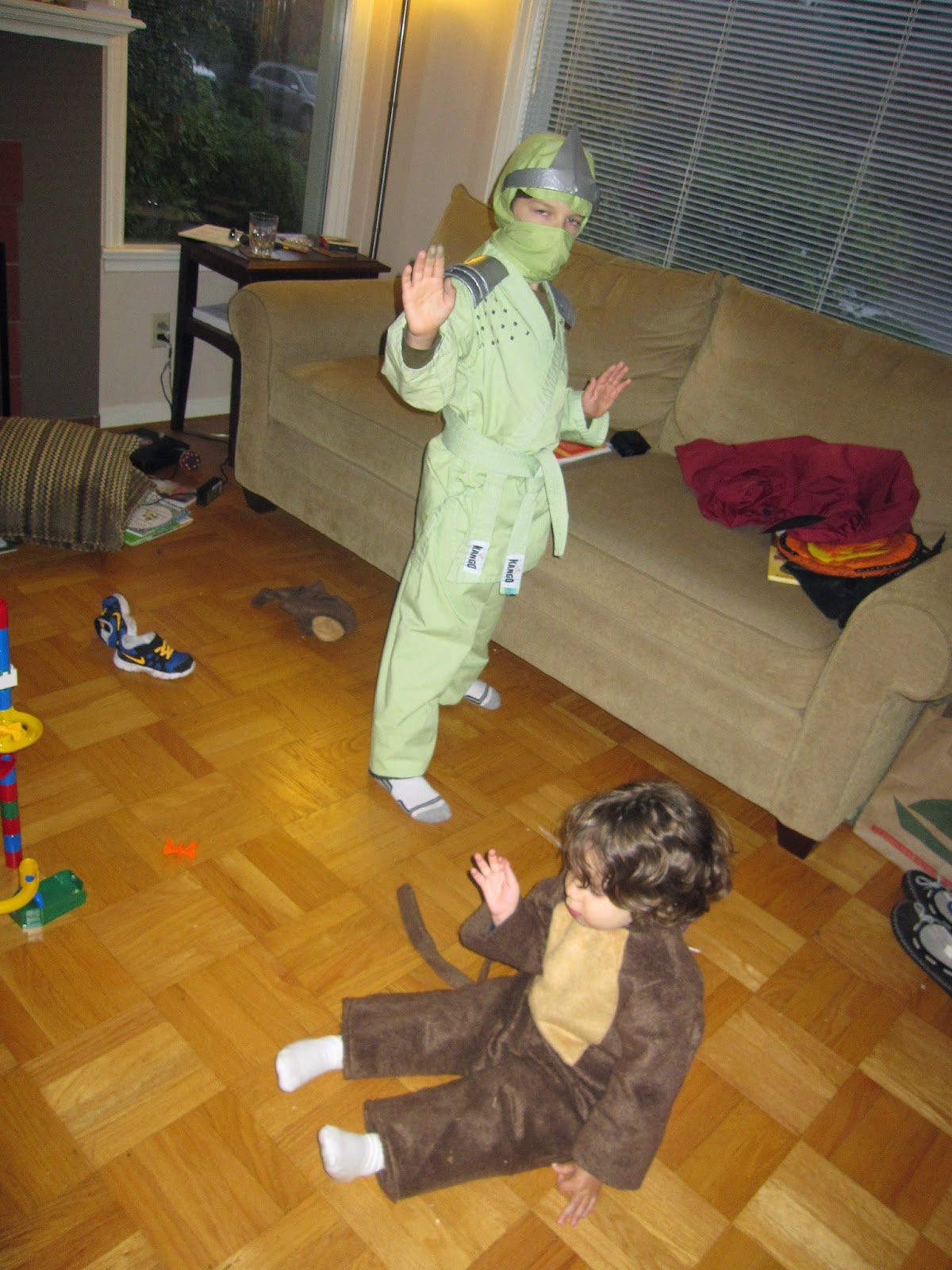 Mal was the monkey that I made back when Gareth was the same age. All I had to do there was cut and re-stitch the face opening of the cap - apparently Mal's face is a little longer than Gareth's was because when I first tried it on the velcro closure landed at his mouth, not under the chin. He was much less amenable to having the tail on, and especially to having me hold the tail (he hates having me hold his hand or pretty much anything that gives me any control over whether or not he rushes into a street while walking), so after a while I just took the tail off because I was worried he or another child would trip on it.


We did our pumpkin carving Thursday night. Got Mal into bed and then Gareth and I got to work. Gareth was so much more involved in this whole process this year. We used his design, as usual, and he was actually really helpful with scooping out seeds and he helped draw the design on the pumpkin and even made a few cuts, though he still wanted me to do the more detailed areas. I got a new tool this year, which makes taking just the skin off very easy, so he had fun with that as well. 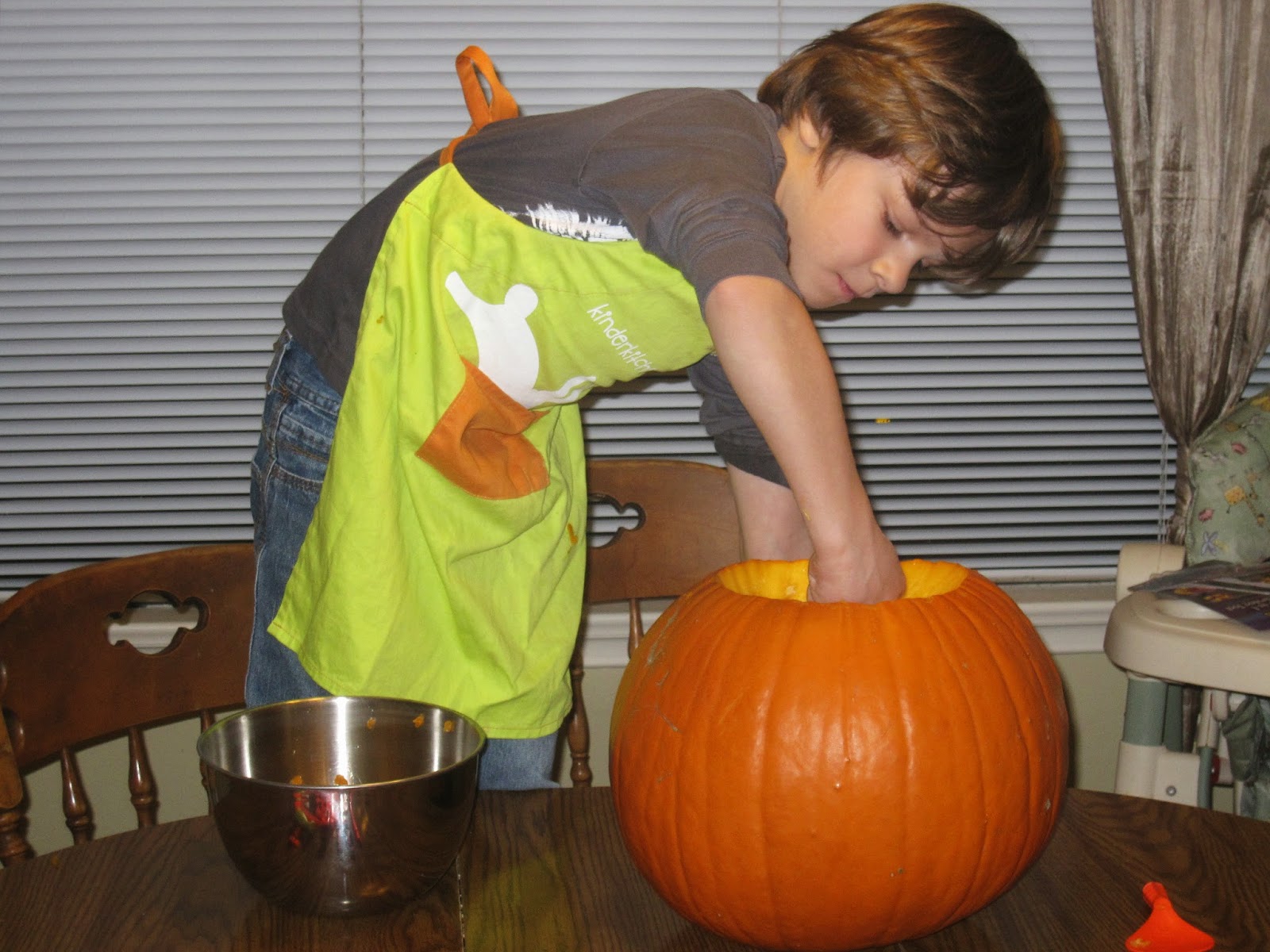 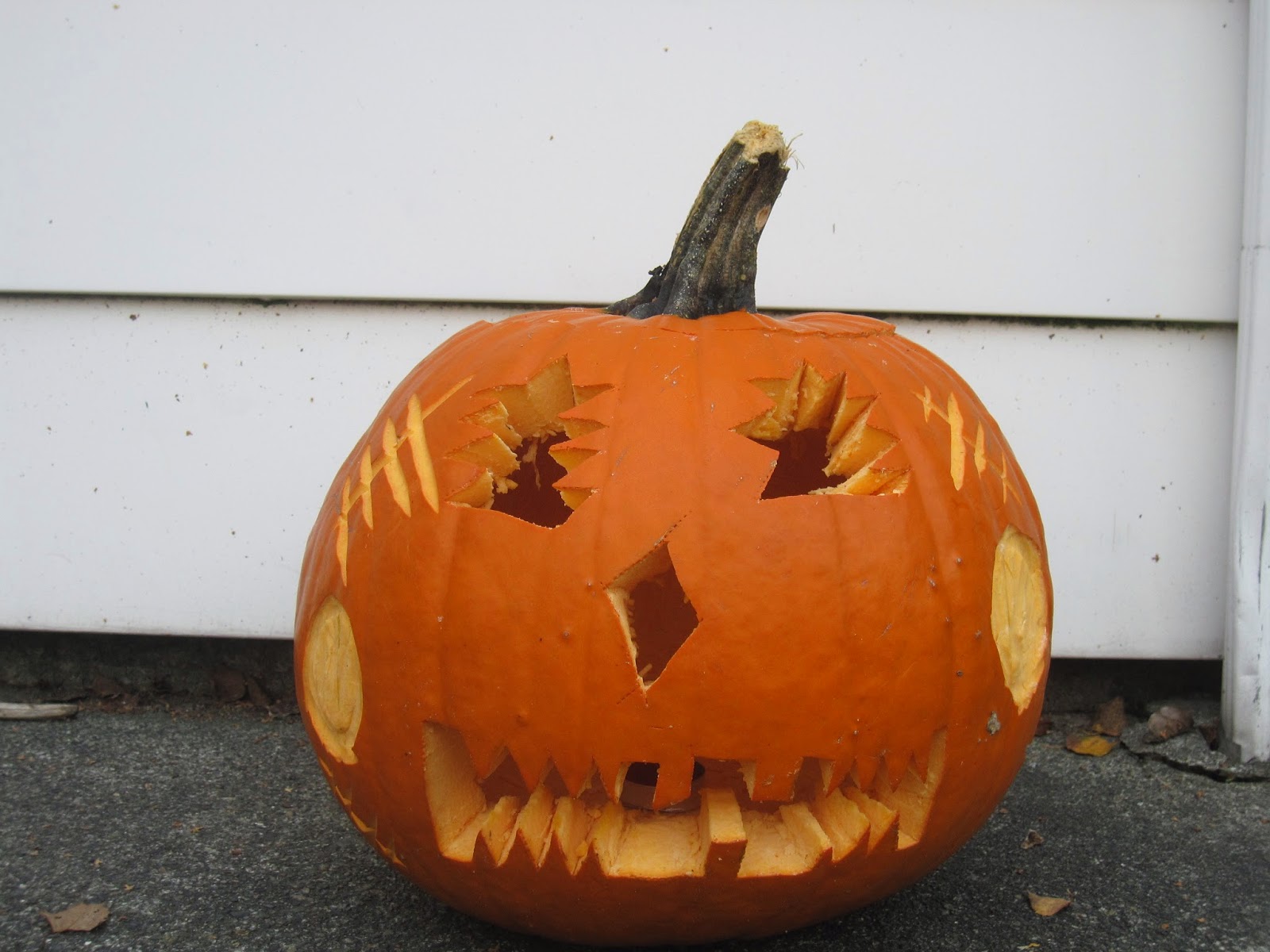 We stayed in our neighborhood for trick-or-treating this year. Went with a neighbor and one of Gareth's friends. Gareth and his friend are a few years older than the other kids, so they wanted to move more quickly than the rest of us, who had to lag behind with the pre-K kids. Malcolm was pretty good about saying "trick-or-treat" and "thank you" when prompted. He wanted to hold all his candy in his hands rather than putting it in his bag, which quickly made things a bit difficult. We made it a couple blocks with all the kids - about 45 minutes. Then it started to drizzle and the little ones were going ever slower (lots of stairs to climb at every house), so our neighbor opted to take her kids home and offered to take Mal as well so I could stick with Gareth and his friend. They had a lot of fun, got a ton of candy (we only did a few blocks total, but when everyone gives 2 pieces to a whole handful of candy it doesn't take long to fill your bag!), and hardly seemed to mind the rain.

Gareth's head armor started to fall off after 20-30 minutes in the rain. I hadn't even thought about the effect that the headscarf getting wet would have on the velcro's adhesive. I was a little disappointed that I constantly had to remind Gareth not to be greedy and to say thank you. I'm thinking some of it is a result of being 7 and some is a result of going in a larger group without me there to remind him to be polite for the past couple years. He was good about asking how many pieces he could take, rather than just reaching in and grabbing at least. I think we'll stick to our own neighborhood for the next few years. Being close to home when you're done trick-or-treating and not having to drive back home is really nice. Altogether, quite a successful Halloween.
Posted by Erin at 4:50 PM

Great costumes! You are quite creative,

Trick or treat here in California any time. ;D