It was just us for Thanksgiving this year, which fact upset Gareth greatly the day before when he realized inviting people over is something you can do. I promised him we'd invite someone next year, though most of our friends have family in the area, so I don't know who.

Anyway. I think it was a nice day. We started out with a nice, clean kitchen thanks to Gareth doing the dishes the day before while I swept/did laundry/dried dishes. I love having a clean kitchen, but it only gets cleaned every few days at this point. So I was really grateful for Gareth being so helpful.


We stick to the basics, foodwise, because it doesn't make sense to make tons of dishes when it's just four people. This makes the day very easy as well. So after breakfast I suggested that we play a game. We brought up Candyland in the hopes that Malcolm would be able to participate. Which didn't really happen, but he was happy enough once we gave him a couple cards and a couple gingerbread people. His people hung out in the "Cupcake Commons" while Gareth and I played a couple rounds of the game. 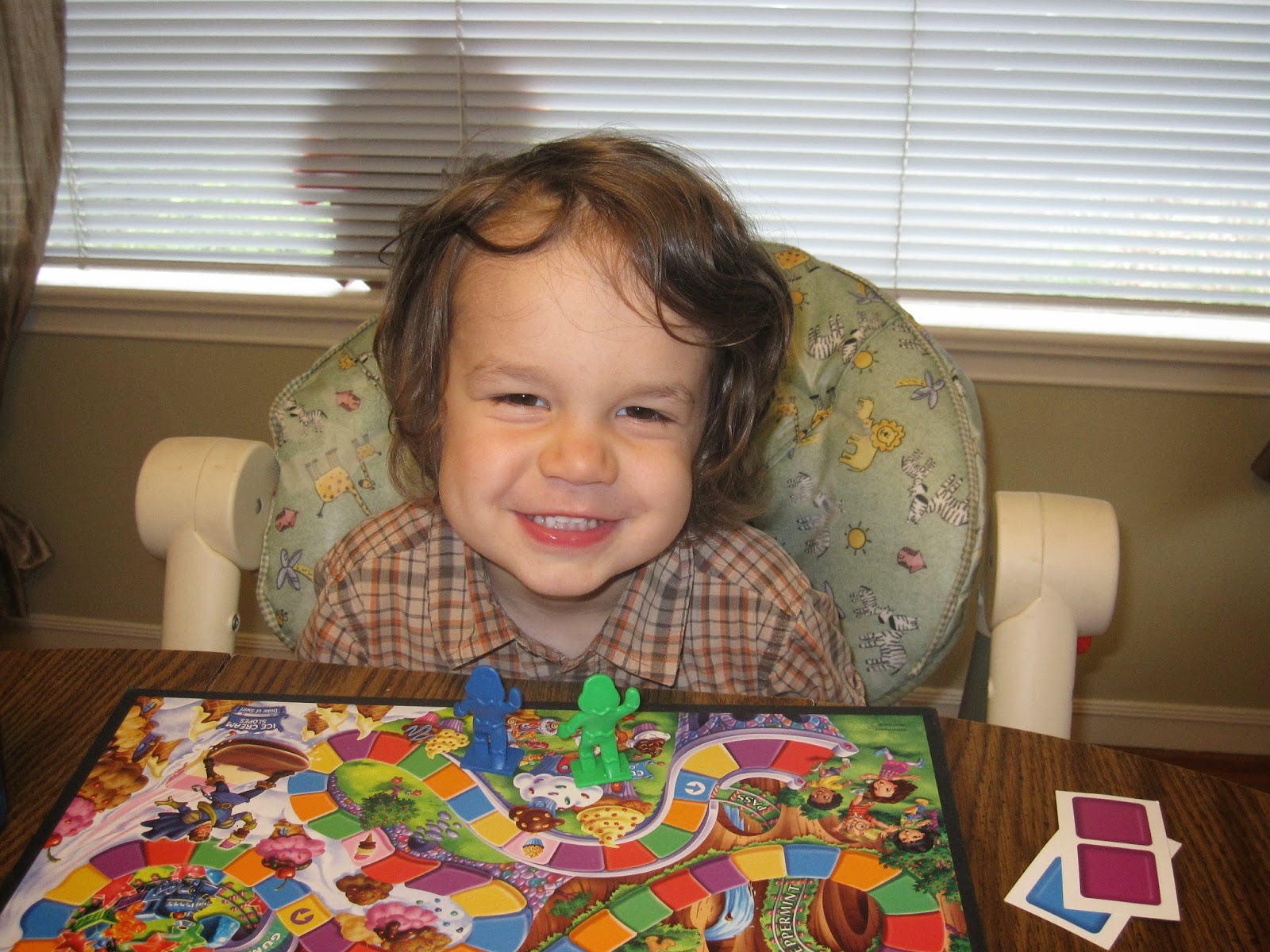 Then somehow we got to making faces and taking pictures (I'm attempting to get a nice one of Malcolm to send to grandparents along with Gareth's school picture, but failing in my attempts). 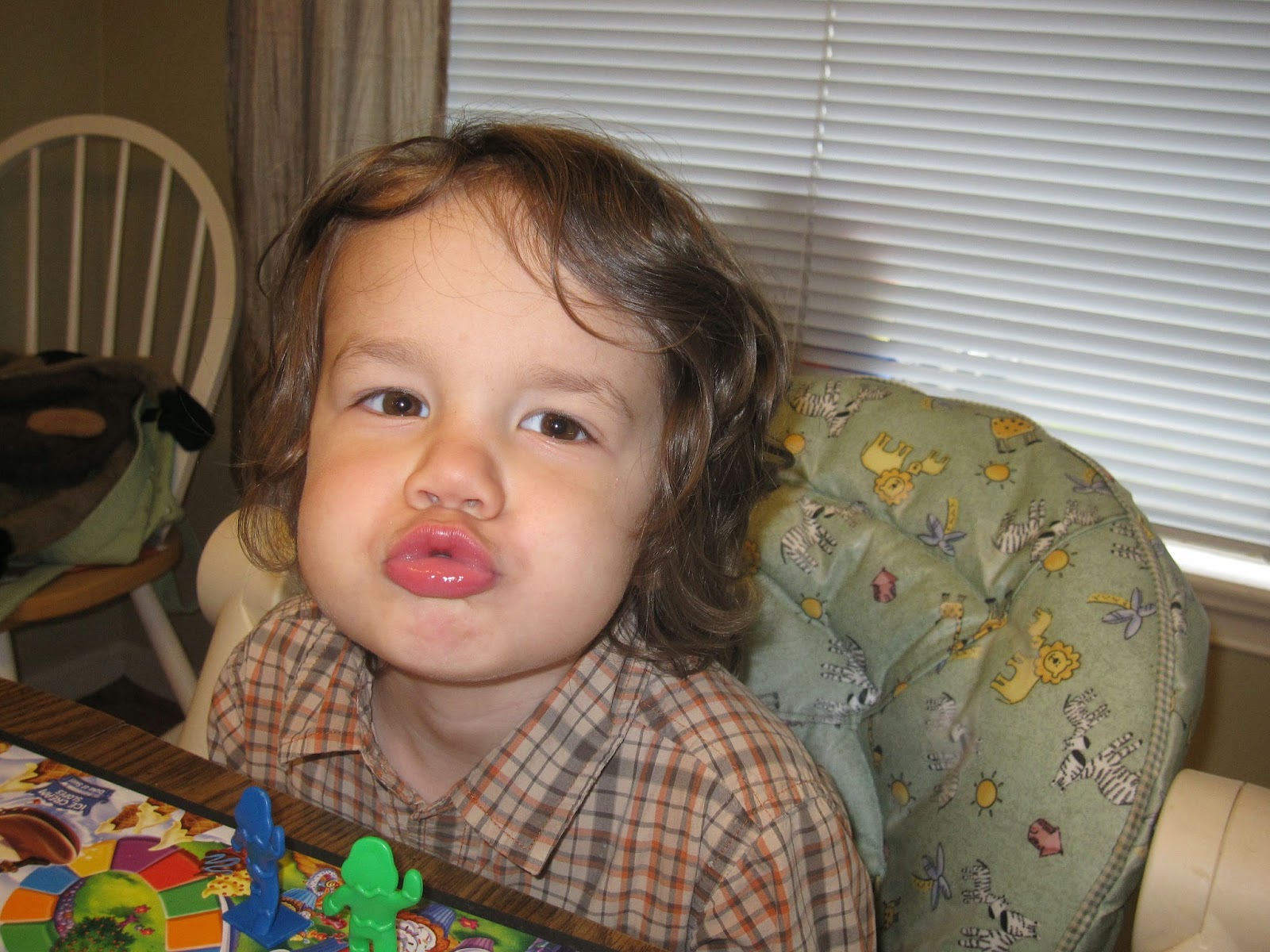 Gareth had to make the silly face as well: 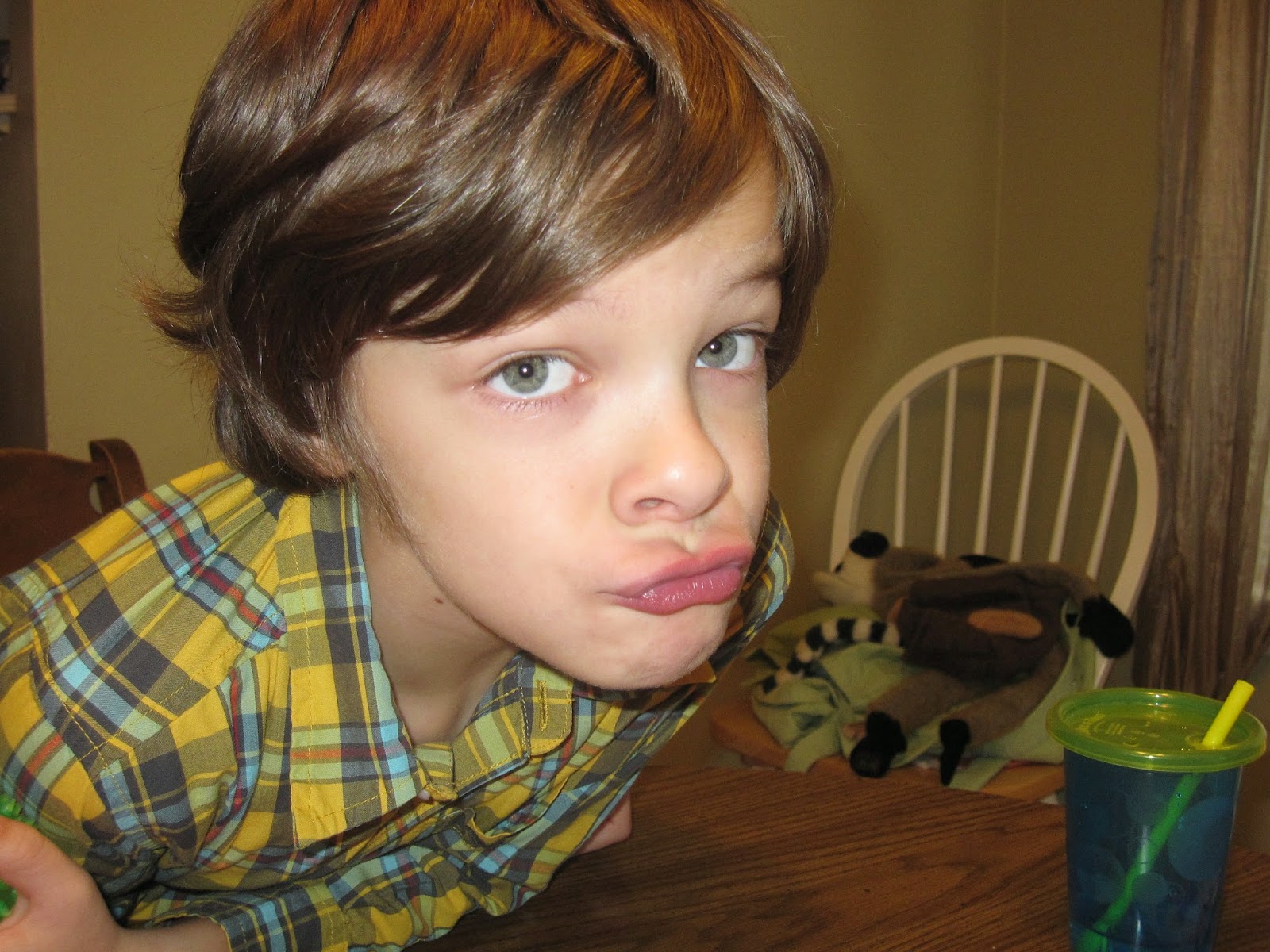 And then he needed one with a nice smile: 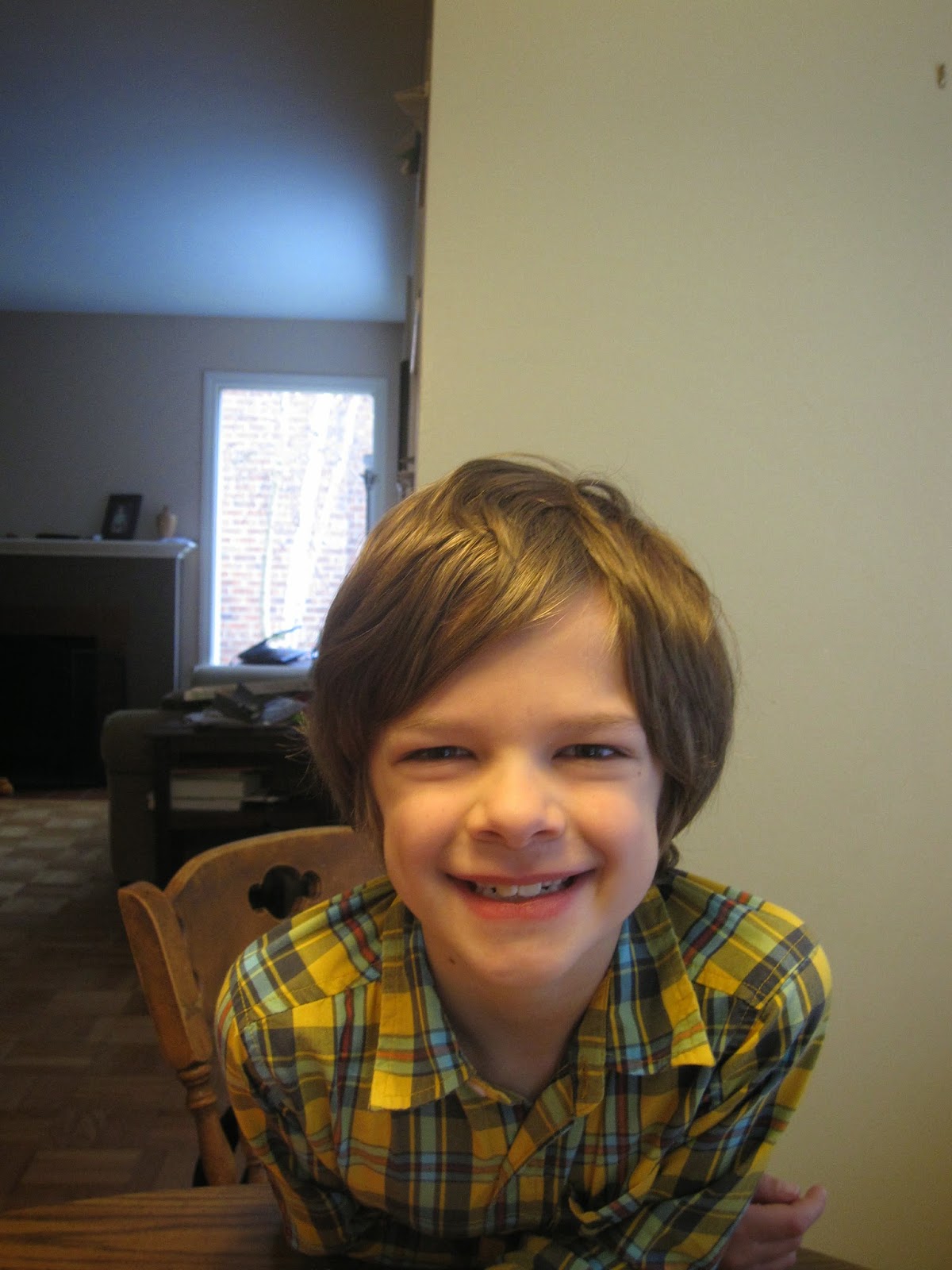 After a while, if you asked Malcolm if he could smile he'd say, "yeah" and then make his puckered lip face then laugh as soon as you took a picture. What do you think, grandparents? Would this make a good picture for your mantle for the next several months? 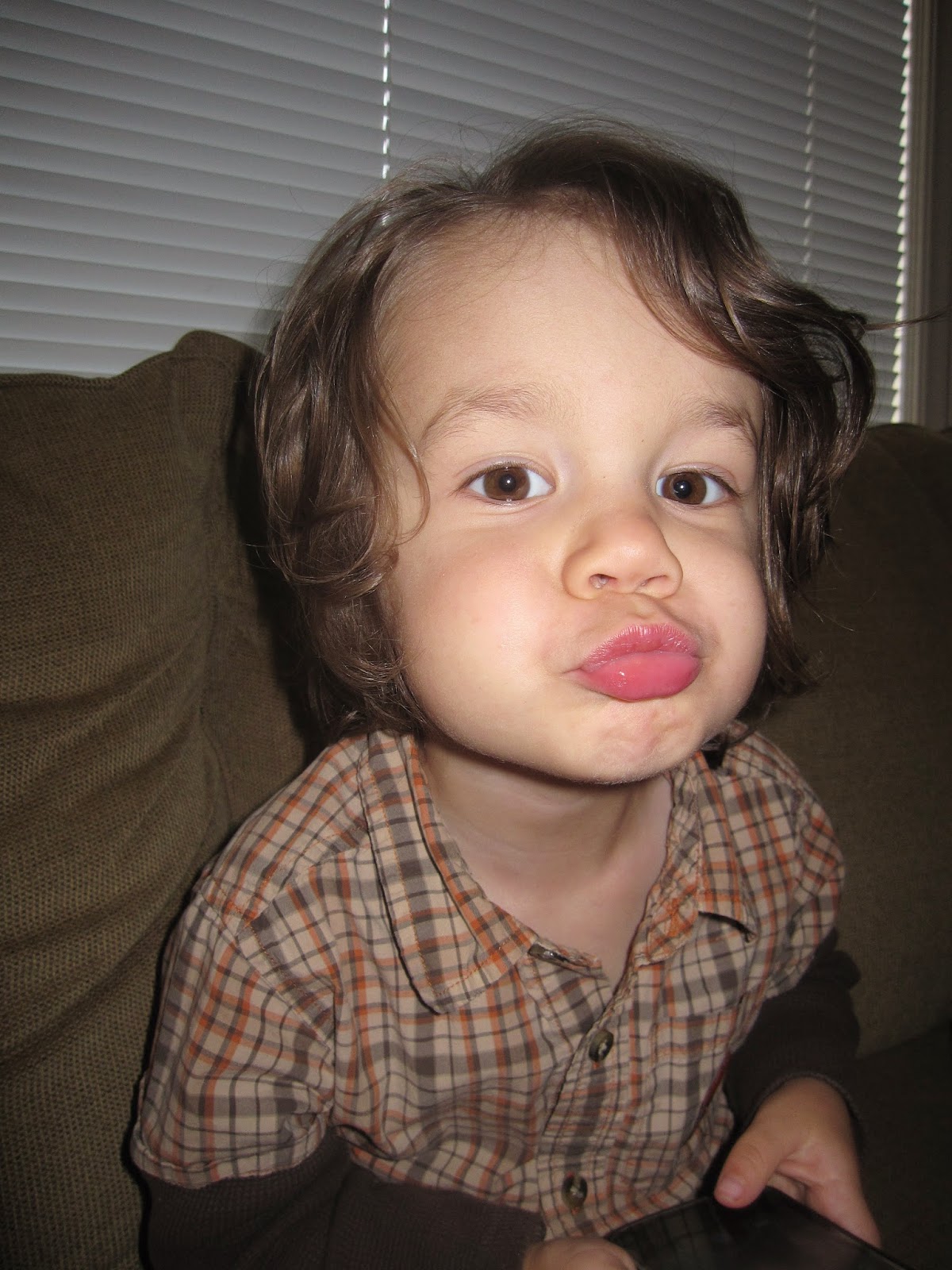 After taking some pictures we started looking at pictures/video. The boys watched our video from last Christmas and suddenly Malcolm was obsessed with getting a tree and putting it "back" (in the corner that we put it up in). I told them we'd be getting a tree in a couple of weeks, but he of course thought that meant right away. So I spent the next twenty minutes convincing him that we didn't need to get ready to go, he didn't need his shoes on, we aren't getting a Christmas tree today.

Eventually we distracted him with a movie. Ryan started to work on a pie. He came home earlier in the week and asked if there was something he could make, so I told him what I was planning on doing and he could pick one of those things or we could find something else. He chose the pie and it turned out beautifully.

While he did the pie I prepped the stuffing and the turkey. Once the turkey was in the oven I got to hang out with the kids and work on a presentation for school. The boys eventually decided to do play-doh, which kept them intermittently entertained until dinner was ready.

Malcolm actually enjoyed the turkey and cranberry sauce this year, which is two foods more than he enjoyed last year. He also seemed to enjoy the pumpkin pie. We ended the day by watching some Dr. Who and Cosmos with Gareth.
Posted by Erin at 8:52 PM

Glad you had some good turkey and some pumpkin pie for Thanksgiving. You are wonderful for playing games with your kids, making great memories for them!

Speaking only for myself, I will take any picture of Malcolm I can get! They are such sweet boys!