We have friends here who were going to be in Tacoma house/dog-sitting for her mom for a couple weeks. They invited us down to spend a day with them at the Point Defiance Zoo. We'd never been and had a Chinook Book coupon that would get Gareth in for free. I thought it'd be fun to all go, but the only way to do that would be to go on a weekend, and with this weekend being the holiday weekend knew that would likely mean big crowds. So opted to go mid-week with just me and the boys instead.

The zoo is part of a larger park that looks like it has a nice scenic drive and some beach areas. The zoo is a good size - not tiny, but not so big that you can't do everything in a day. We started at the aquarium. Malcolm loved trying to pet the sting rays and screamed at me when it was time to move on. Eventually he calmed down when he realized there were other cool things to see. Like spiky lobsters. 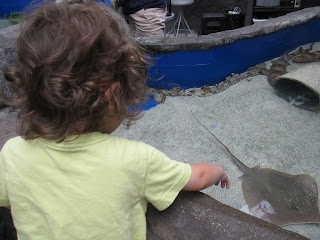 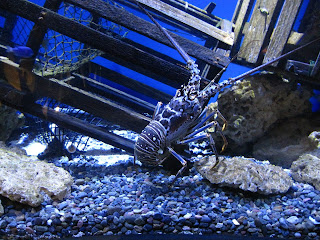 Then he screamed at me when it was time to move on from those. That's pretty much how the entire day went. Attempts at getting pictures in the dark aquarium weren't too successful, so I gave up after a while. I thought these starfish were rather cool. 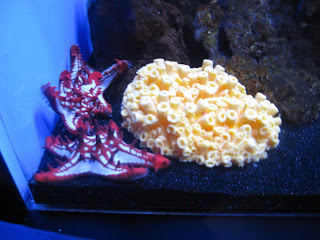 After the aquarium we saw the elephants. The one we could see seemed to be trying to stick to the shade and wasn't doing much. Malcolm didn't like that I wouldn't let him go play with the elephant.
Then it was on to the tigers and leopards - they had some adorable cubs that were sleeping. And the monkeys. The monkeys were the first really active animal. Malcolm loved watching them swinging.

Then we ate a snack to distract Malcolm from trying to run back to the elephant. The older boys asked for a camel ride as we passed, but at $6/person we told them they had to choose between a camel ride and a carousel ride. And that we'd wait and choose at the end of our day.

On to the walruses, seals, and puffins. Malcolm adored the walruses. They kept swimming right up to the window so everyone could get a good view of them. After we moved on Malcolm kept insisting we go back to them again. 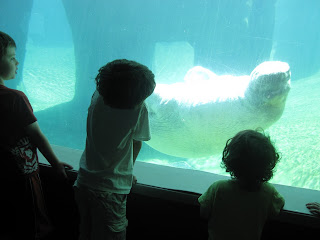 We caught a glimpse of the polar bear and saw an arctic fox as well. Then passed a couple muskoxen on our way to the play area to eat lunch. 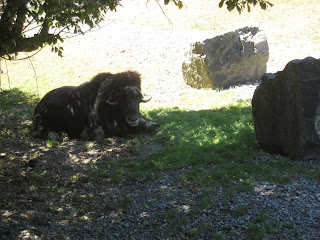 Apparently there are goats, wallabies, lemurs, and meerkats near the play area, but we skipped those. Ate lunch, let the kids play. Malcolm found some cool frogs. And all the kids cooled down in the small splash pad that turned on while we were there. 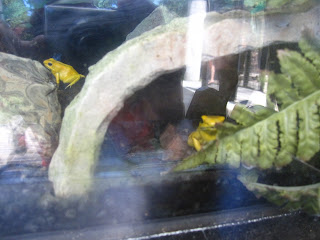 The older kids decided on the carousel over the camels (only $1.50, much better). Malcolm, our overly risk-averse child, screamed in terror when I asked if he wanted to ride on the carousel. So he and I watched the other kids ride. Then we got them ice cream. Malcolm was totally on board for that. 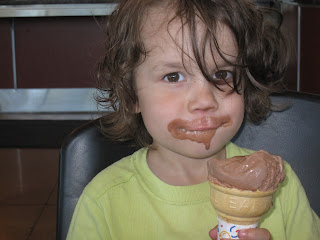 We headed back to the house where our friends are staying and hung out in the air conditioning and ate some dinner before heading back home. Definitely a fun first outing of the summer!
Posted by Erin at 5:42 PM