Gareth has started jiu jitsu. A while ago he had expressed interest in trying out something new. We'd watched several jiu jitsu and several break dancing videos with him (Massive Monkees are based in Seattle and teach kids classes), so we proposed those options. It was a tough choice and in the end he chose jiu jitsu. Took me a while to get in contact with this place, but so far the instructor seems good. We did a trial class last week and he liked it, so we were planning to go back on Thursday. But then water happened, so he didn't get to go. Which worked out okay because his gi wasn't going to arrive until Friday. So today he got to go back for the second time. Both weeks he's been one of two kids there (though different kids each time). There was actually a third kid there, but she told me she had a cold and so couldn't do class. She was there because her dad was starting jiu jitsu (and her mom already does jiu jitsu), so she was just hanging out while they practiced (she also told me all about the food at the brewery next door and how her favorite soda to get there is the blue one - very sociable kid). Anyway. Gareth enjoys it a lot so far and all the kids seem to have a great time in class. I'm interested to see how he progresses over time. Here he is trying to do a move with his leg to knock over the other kid. Last week he learned some arm bend thing. Hopefully he'll eventually remember some of these moves for more than a day or two. 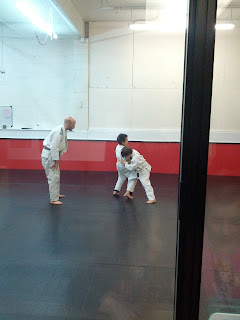