We were invited to go along with our friends, the Redpaths, to Sequim (pronounced Sqwim) on Monday. Sequim is famous for it's lavender festival, but mid-January is obviously out of season for lavender.

Instead of lavender (though we did see some farms/plants, they were obviously not flowering at the moment), we were treated to some gorgeous views of the mountains and the Strait of Juan de Fuca. We saw a sleeping cow on our drive (there are lots of farms in the Sequim area), one kid said it looked like it was dead. Mal kept talking about how the cow died, which eventually morphed into something about it being a zombie. The kids kept trying to emphasize that, no, the cow was just sleeping, but Mal was insistent it was dead. Later he informed us that a person in a car parked next to us was eating a toy for breakfast.

After lunch at a local diner we checked out the Dungeness Recreation Area, which is both a county park and a national wildlife refuge. You can see Canada from the park, though the view was a bit cloudy yesterday. Looks like there are some camp sites in the park, some close enough to the water that you'd be able to enjoy the calming sound of the waves from your site. We couldn't find a way down to the water - there's some serious erosion happening near the path and climbing on the bluffs would be very dangerous. It's a beautiful area and would be worth a trip back when the weather is a bit warmer to explore the trails further. All told, a great way to spend the day. Photos courtesy of Mr. Redpath's camera. 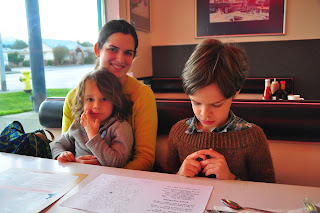