Right in the middle of finals I had my last orchestra concert of the season. We performed Rachmaninov's Third Symphony and Rite of Spring. 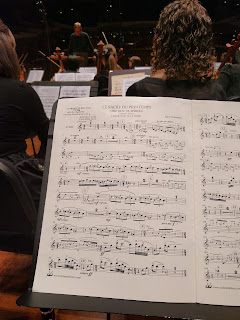 I got to play the Eb clarinet part on Rite of Spring. I'd previously assumed all the solo stuff in the piece was first clarinet; turns out, it's all Eb clarinet. Yikes! I started practicing the part back in October, just so it wouldn't be too stressful with school going on. Unfortunately, my performance was not my best. Things went a little wonky for everyone in the opening and I messed up a couple things I'd never messed up before. But, after that, all my other solos went well. There were plenty of things that were not perfect for the orchestra as a whole throughout the piece, but we made it to the end in one piece. I'm glad I had the opportunity to play it because, as one trumpet player put it, most community orchestras wouldn't be insane enough to even think about programming Rite of Spring. We also had our largest audience of the year - just over 1100 people; it's always fun to play to such a full hall.

Mal's been pretending to be Darth Vader a lot lately. One day he went to preschool with his makeshift Vader cape on: 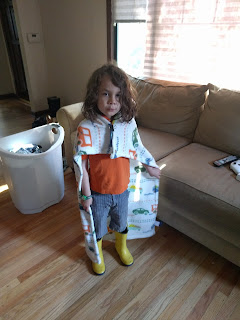 And he's been insistent about wearing the rain boots quite a lot lately. Of course he would be, now that it's not raining anymore.

Ryan's birthday also fell during my finals, so we held off celebrating that until this past weekend. I made one of his favorite dinner dishes and a German chocolate cake. We only had 15 candles, so we just kept relighting them until he'd blown out 36. Ryan didn't really want any items, because anything he really wants he'll just buy himself anyway. So I'm trying to get Gareth to do a thorough cleaning of the boys room instead of buying a gift. And Mal decided he wanted to get Daddy 16 sparkling waters "because Daddy's turning 16". I informed him that Daddy is actually turning 36. "Oh, then I'll get him 36 sparkling waters". The idea made me laugh, so Ryan's gift he got to open was 36 cans of sparkling water. When Gareth found out Ryan was turning 36, his response was, "Oh! I thought he was 46!".

The day after I finished classes, I swept and mopped all of the main level floors. It was so satisfying! I finished that before noon, so I even got to enjoy a clean living room for a few hours before the kids came home to make a mess in it again. Cleaning is so much more enjoyable when there aren't kids around to try to help. I find if I start out intending to have them help I can deal with that much better than when they come along and decide they want to "help". And sometimes you just want to get the cleaning done and having a 5 year old do the cleaning isn't conducive to the end goal.

Gareth still has a few more weeks of school, so we won't be in full summer mode for a bit yet (plus, the temps have dropped into the low 60s again - I turned the heat back on yesterday). I'm trying to keep myself on task and get as much done as I can before he's done with school. Hopefully we'll be able to get the occasional fun outing in over the summer alongside all the work I need to do.
Posted by Erin at 11:00 AM

Congratulations on getting a scholarship! That's wonderful! So proud of you and glad you are nearly half way done. I look forward to planning a trip up there next year sometime. Start thinking about when might be best for you.

I love hearing about the kids, too. They are so imaginative!

Kids and cleaning--yes, they can make it go twice as long and half as well as when you do it yourself, so it's always nice to just get it done yourself every now and then. I'm glad to hear you let them help out because they can only get better at it.