Just after finishing up my online summer class (that I put way more time into than I should have), my mom arrived in town. She came to visit and to help out with the kids while I'd be away at Camp Leo doing my community rotation. The kids had a great time with her while she was here. She'd brought several activities for them to work on together, took them to the park, made cookies with them, etc. Then when I got back, she continued to entertain them while I finished up my rotation assignments. We even managed to sneak in some time to accomplish some small projects that I'd been wanting to complete.

Camp Leo is down by Mt. Rainier National Park. Since my preceptor and I arrived early, we drove up past the camp and found a lookout spot: 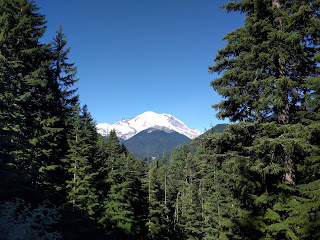 A couple days after I got back we took Gareth to the orthodontist and had his braces removed. Then went back a week later and got retainers: 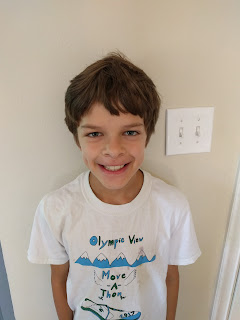 The boys had requested that Gram make marshmallows while she was here, so once I was back she obliged. Mal enjoyed getting to lick the bowl (and eating the marshmallows): 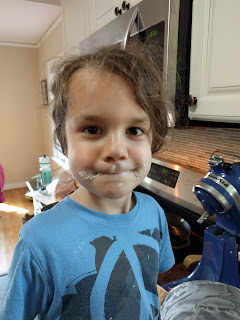 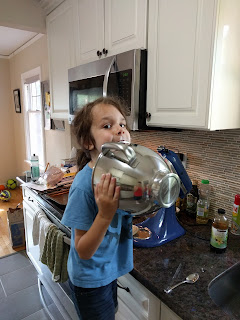 I still hadn't put away my sleeping bag from camp, so Mal found it and was pretending he was Santa Claus and the sleeping bag was his sleigh. 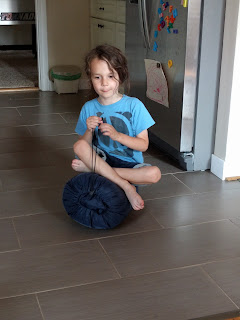 One of Gram's projects with the boys was to make boards that we can record their height on. Mal was supposed to be getting ready for bed, but he discovered that Gram and Gareth were out sanding the boards and didn't want to be left out, so I let him sand for a bit before telling him he'd done a great job and getting him off to bed. The next day the boys got to paint the boards before Gram added the ruler markings. 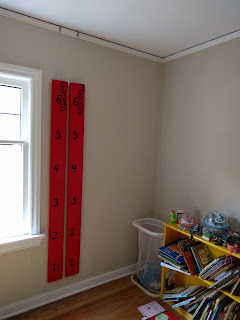 We also managed to get to the hardware store and get our wall paint matched so that I could touch up the spots that had needed repairs since moving in. The boys' wall where Gareth had overloaded a hook and ripped off some plaster now looks good as new. As does the bathroom wall where a person working on our tuck pointing had ripped out some sheetrock when tripping in the bathroom. I'd also wanted to take off the towel bar and put in hooks instead and fix the towel ring by the sink, which meant a couple more patches to the sheetrock. I'm so excited that we'll all be able to hang our towels in the main bathroom now. We also found a basket to hold the bath toys, which helps a lot in keeping the bathroom more organized. 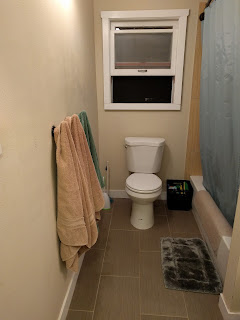 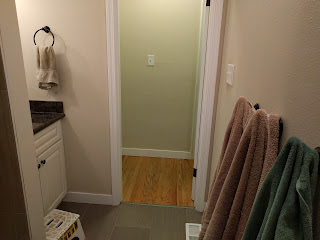 The boys and I were sad to see Gram go, but got to enjoy a bus/lightrail ride with her down to the airport. Luckily I managed to schedule some time with friends over the rest of the week to help distract them from their sorrow over her absence.
Posted by Erin at 3:26 PM