Toward the end of September, I looked at our October calendar and realized we didn't have many open weekend days during the month. Gareth's time has been frequently co-opted by sleepovers with a friend lately, which has made doing family things more difficult (we're going to have to cut back on the sleepovers in the coming months so we can do holiday stuff and just so he can maintain relationships with other friends as well). Ryan was going to be out of town for a whole weekend for the wedding of a high school friend, and I was going to spend two weekend days on concerts. I was working the weekend Ryan was going to be out of town, and we needed to go to a Halloween event at a friend's house after one of my concerts. We were left with two possible days to go to the pumpkin farm, but one of those was a sleepover day, so we chose the other one - the first weekend in October.

Turns out that's a pretty good time to go to the pumpkin farm as it's not super crowded yet. Mal was still very into the cutout photo ops. 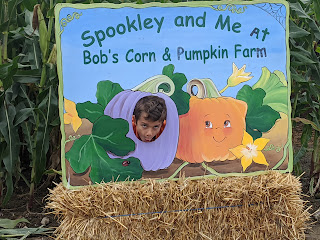 Then he wanted to take a picture of the landscape: 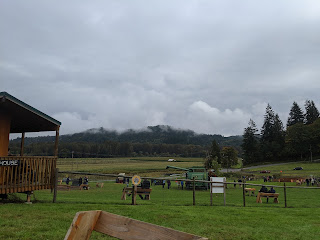 After which it was right back to the cutouts: 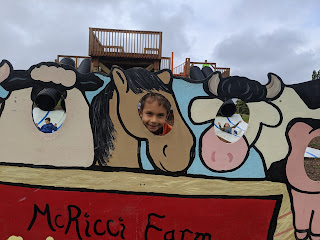 Mal immediately wanted to go down these slides, but then was nervous about them and made me go down with him the first time around. Gareth tried to be non-chalant about it all, "Yeah, sure, why not?" when asked if he wanted to take a picture or go down the slides (but you could tell he loved it all; it's hard being a tween and trying to figure out if you can let yourself just like what you like or if you're supposed to be "too old" for stuff!): 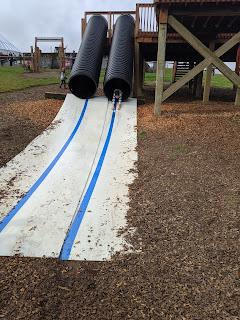 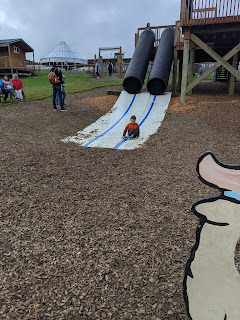 Several parents got roped into going down the slides with kids, just like me. There's a bump at the bottom, so every single adult came out stating that that was a mistake, they should have medics there for the adults, walking their now aching bodies back to the benches gingerly, etc. Glad I wasn't alone in my pain! Thankfully, after one go with me, Mal was thrilled to go again and again and again on his own.

Mal checked out the big tractor while Gareth worked on the rope maze: 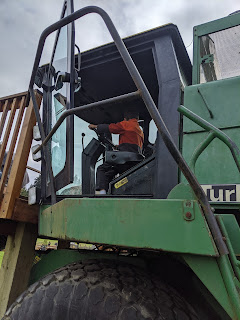 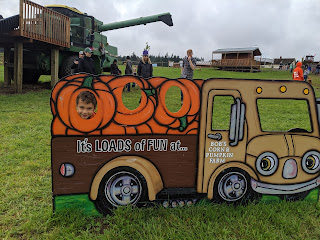 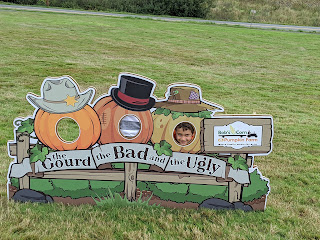 And then Ryan decided to join as well: 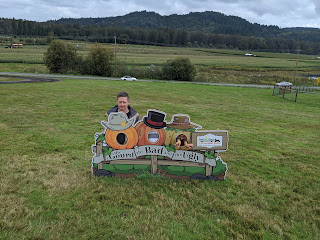 We took a break for some food. Cider and pumpkin donuts, roasted corn, hot cider. The deliciousness was dampened by the insane number of bees hanging around (maybe the one downside to going in early October?) Boys couldn't finish their cider, because there were constantly 4 or 5 bees also loving the smell of the cider. It was not fun for the boys (not helped by Ryan's fear of bees; I was the only one staying calm and they seemed to not like me quite as much as everyone else who was freaking out). Eventually we gave up on eating and headed to the hay ride to the pumpkin patch and corn maze. 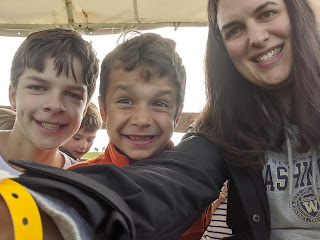 Photo op at the maze halfway point (I love the face Mal is making here)! 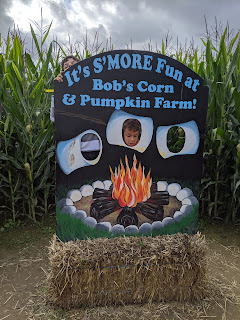 After Gareth and Mal successfully led us through the maze, we searched for pumpkins. Gareth took a while to find the right pumpkin while Mal picked his immediately. We'd told them they had to be able to carry their pumpkins. 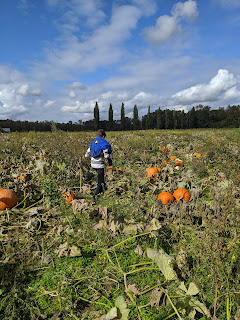 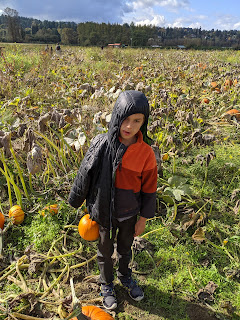 Folks were very impressed with Gareth hauling his pumpkin back onto the hay ride by himself. Also, white/grey shirt is not a great choice for pumpkin picking. 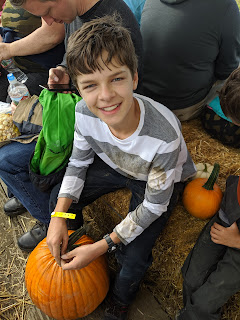 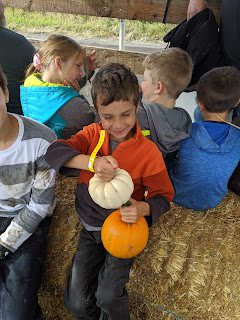 Back to the car! We recommended using a wheelbarrow for the hay ride to car walk. Would've taken forever otherwise. 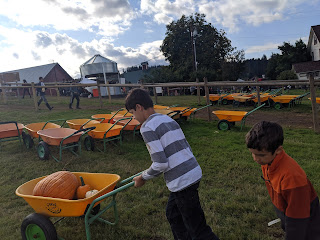 Aside from the terror of the bees (which they kept calling wasps - it felt very melodramatic because of that), it was a beautiful day and a great outing! Now we just needed to find time to carve the pumpkins...
Posted by Erin at 9:10 PM

Sorry, I'm super late commenting here, but I love these pictures, especially how Mal needs to stick his head in every one of those cutout thingies! And I LOVE your description of how tweens are never sure what they're still allowed to like-- truer were words were never written!!!!!! (PS-- this is Alanna, even though google now always wants to tell everyone I'm Craig. I'm too lazy to sign out, sign back in again, and type this comment again. So don't wonder who Craig is or why he's suddenly stalking you!)