We're getting one block of sidewalk installed by our house. We're all very disappointed that they aren't rounding the corner and just continuing on up the road to connect with the sidewalk by the school. Maybe in another decade or two that will happen. BUT, we're going to enjoy the sidewalk we are getting. Though I'm trying to tell myself that they'll probably do something with how they make it that will be less than ideal, just to temper my excitement (and disappointment if they do mess something up). We've known about the sidewalk plan for about a year, but just saw the signs go up indicating they were starting work a couple weeks ago. 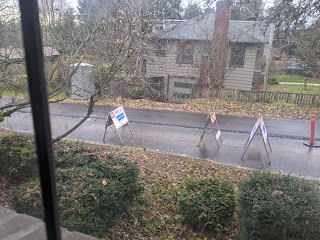 Per the signs, it seems they're planning to get the work done by mid-December. We'll see if that actually happens. So far they've got some curb and driveway cut-outs in. But they haven't gone all the way down the street with those things yet. When Mal saw the initial preparation work he exclaimed, "They mined!" (Ryan and the boys have been playing Terraria lately.) 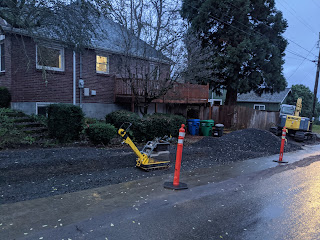 It was a bit of work to figure out how to get our bins out for collection day since they were cut off from the street by the trench. But Gareth managed it in the end. And then, after initially being hopeful about our prospects of being able to park in our driveway after this is all done (it's a rather short drive and has always been somewhat dependent on the right of way), once they poured the curbs we were worried we wouldn't be able to and would have to figure out an alternative solution. But now we're back to being a little hopeful again, since they uncovered the cutout and the small section of sidewalk they poured next to the cutout and it looks fairly promising. Even if we can't park in our driveway, I'm happy to have a sidewalk. I've told Ryan we can buy bags and bags of salt and I'll salt the entire thing (since no one around here ever bothers with that) if we have any risky days. I'm seriously tempted to salt the entire 4 blocks to my bus stop on icy days.

I've also gone on a couple more bike rides recently. One across the 520 bridge and back on the I-90 bridge. Then we rode up some steep hills through south/downtown Seattle to work our way back to my house. And another to the Discovery Park Lighthouse (which has a very steep hill coming back up). The last time we rode to this lighthouse together, Mal was with us in the trailer and much smaller than he is now. It was also a cold day and he wasn't at all happy when I pulled him out of the trailer for a picture. Didn't see any eagles on this ride like we did then, but it was a beautiful, if chilly, day. 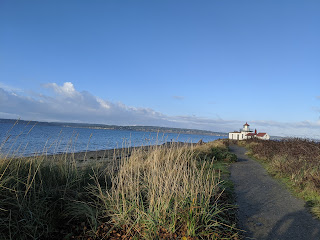 Hurray for sidewalks! I hope it turns out great.